by Laurence Gale MSc
in Consultancy
on 03 May 2004

Agripower, the Buckinghamshire based sports turf and drainage contractor, is part way through a £2 million pound+ contract to refurbish the sports pitches in Regents Park, NW1. The contract was awarded in March 2003 and started in late April with completion date in September 2004.

The Royal Parks Agency (RPA) was awarded sizeable grants from various organisations giving a project fund in excess of £5 million for the reconstruction of 50 acres of sports pitches and the construction of a new state of the arts pavilion.

The new facility will include the construction of 6 full size cricket squares with one to county standard, 15 full size winter games pitches and a further 15 junior pitches. All pitches will be fully drained and irrigated.

Agripower's contract was to install all the infrastructure, including all utilities for the pavilion contract. These valuable works were carried out over the winter months when works on the fields were not possible.

The specification carried out by Agripower was to reinstate the total playing area at Regents Park, a project that involved the following operations.

All surface vegetation was desiccated using glyphosate followed by installation of a primary drainage system with main drains discharging into the Regents Park lake. A rock trencher was used initially in areas of bomb rubble followed by pipe installation to predetermined grades by Mastenbroek sportfield trenchers. During these operations 3 second world war mortar bombs were found and each time the Bomb Disposal Unit were called to deal with them.

Sharing some of the drain trenches are the irrigation pipes and Rainbird pop-up sprinklers. All drainage trenches were backfilled with 10mm shingle topped off with 2.4mm grit imported from Devon.

The drainage consisted of: 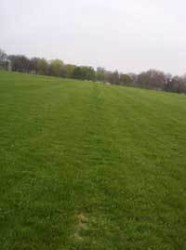 The approximate quantities of back fill material supplied by the nominated supplier, Tarmac Topsport, for these drains totals over 4,000 tonnes of 2.4 mm grit and 7,000 tonnes of 10mm gravel.

At the time of my visit three quarters of the site had been completed: all six cricket squares were finished, primary drainage and irrigation had been installed, as had the cultivating, grading fertilising and seeding of over three quarters of the site with drainage of the remainder being carried out. The grass has established very well and was having its first cut of the season using rotary mowers and, once down to its specified height (40mm), will be mowed regularly using cylinder mowers.

Agripower are implementing a fertilising programme that has been designed specifically for both the outfield and cricket grass mixtures which will see over 60 tons of fertiliser being applied during the project. The following seed mixtures were sown using grass seed supplied by Nickersons. Cricket squares: a rye grass seed mix of 40% Ace, 40% Merci and 20% Sauvignon. Outfield areas and pitches: 40% greenway, 40% essence 20% green fair. The total amount of seed being used at totals 13 tonnes with 7.5 tonnes sown at 35g per metre to establish the sward and a further 5.5 tonnes used to overseed at a rate of 20g per metre.

The construction of the squares involved excavating and grading to predetermined levels, importation and compaction of Surrey loam using Agripower's own uniquely designed grading and compacting machine.

Once the satisfactory establishment has been achieved, the sand bands are to be installed at 1 metre spacing over the whole site followed by various top dressings of Kingsey No 1 sand giving a total thickness of 37mm which equates to approximately 12,000 tonnes.


Grant Holmes, one of Agripower's directors, has been overseeing the total organisation of the project, including the considerable amount of unforeseen extra work awarded since the contract started.

The project is currently running on target and is due to be handed over to the RPA for use in late September 2004.

Agripower's head office and workshops are based at Great Missenden in Buckinghamshire with a works depot serving the Midlands and north of the UK based near Birmingham. The company has a workforce in excess of 30 and offers a full range of services from consultancy through design, construction and maintenance of both natural and synthetic surfaces using the latest technology and equipment to suit all applications