by Louise Challiss
in Contractor News, Aeration, and Machinery & Mechanics
on 29 Nov 2021

0 Air2Root turn to Redexim - as they expand premises, services and machinery fleet!

It's been 18 months of expansions for the team at Air2Root Turfcare Limited - new larger premises, more staff and an even bigger bank of equipment from Redexim! Amongst their recent purchases are a Verti-Quake 2521, a SpeedSeed and a Verti-Drain 1513 complete with Carrier, which will sit proudly on their fleet alongside their OxyShot air injection unit and will help the company in their aim to become a 'one-stop shop' for maintenance services at venues nationwide. 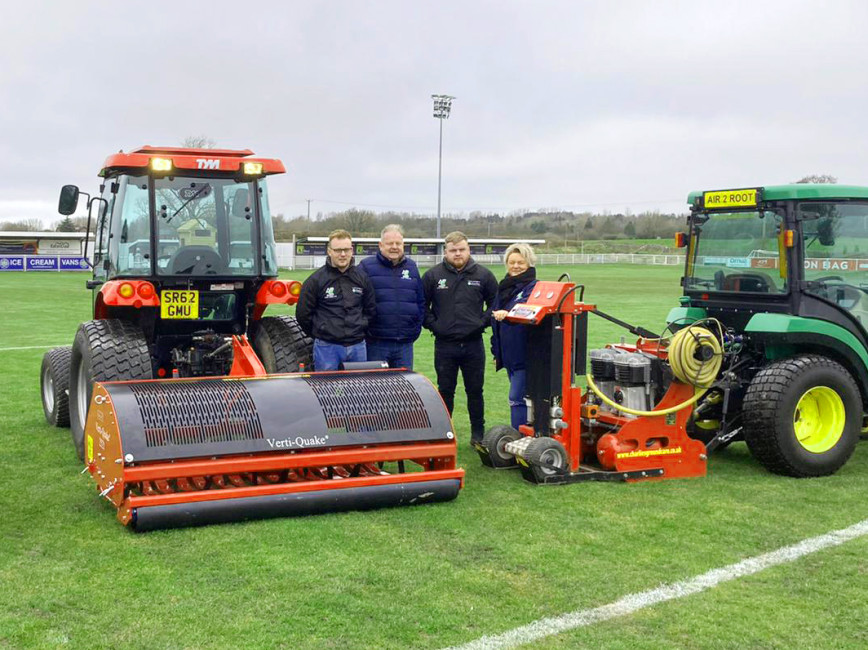 Air2Root Turfcare pride themselves on using market-leading machinery, technology and products to deliver the very best results to facilities from across the sporting spectrum. Alongside developing their own performance-based fertiliser products, they've also recently become distributors for DLF Seeds and Boughton Loam. "It's been an exciting time and the range of services we can now offer our customers has grown massively" explains Director Jamie Moult. "But to ensure we continue to deliver the quality of results our clients now expect, we must have the right machinery at our disposal. The combination of reliability and performance, along with the working relationship we have with Andy O'Neill from Redexim and their dealer network, is the reason we keep coming back."

Unlike other contractors that run large, heavy tractors and kit, Jamie attempts to keep the majority of his equipment relatively lightweight to minimise compaction and give him complete versatility. "Our new Verti-Quake 2521 is flat out at the moment, in use on football pitches, rugby surfaces and golf fairways on a daily basis. The rotary action of the blades creates a wave motion which breaks through compacted ground down to depths of 10" - leaving very minimal disruption in its wake. We've had a lot of feedback from customers on the clean and tidy work the Verti-Quake has been doing, complementing the routine aeration that will have taken place throughout the year."

"We've got such fantastic flexibility when it comes to completing aeration work, with the selection of Verti-Drain's, the Verti-Quake and OxyShot we now have at our disposal. As we head into the new year, we then have our Redexim SpeedSeed and a Rink DS800 topdresser to optimise new season growth and assist with spring renovations." Jamie concludes, "With Redexim, we know what we're going to get and that's equipment that consistently delivers the desired result."