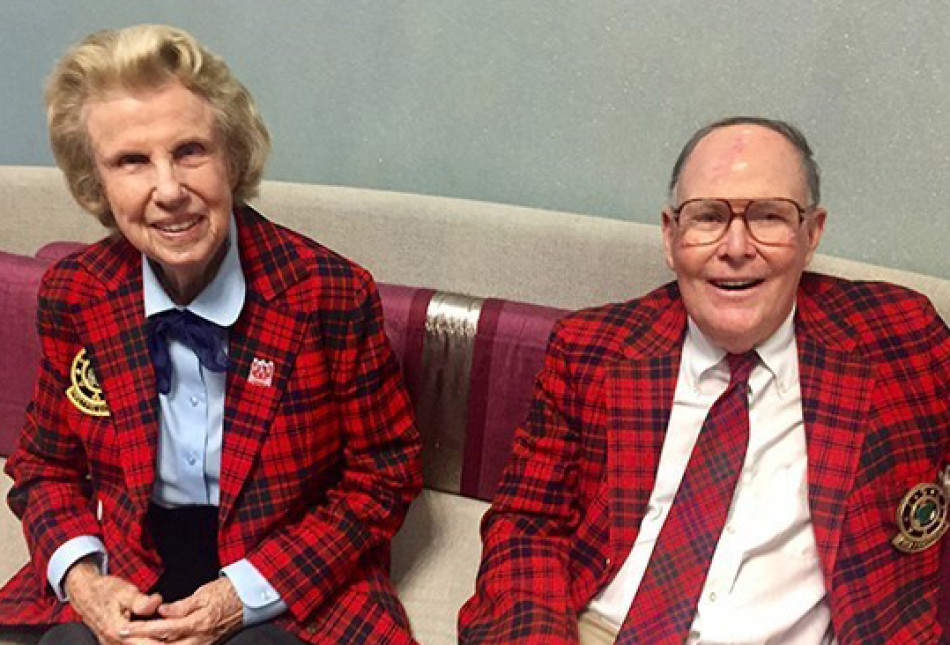 Alice Dye, the first female President of the American Society of Golf Course Architects (ASGCA), a Fellow and 2017 Donald Ross Award recipient, died Feb. 1, 2019, at age 91. The matriarch of the most famous family in golf course design - and architect of the famed 17th hole "island green" at TPC Sawgrass - ASGCA members will remember Dye for her service to ASGCA and the game of golf.

She met her future husband, Pete, at Rollins College in Winter Park, Florida. The couple married in 1950 and moved to Indiana, where Pete began a career in golf course architecture in 1955.

Their commitment to golf course design was cemented after a tour of Scottish golf courses that followed Pete's competing in the 1963 British Amateur. "Both Pete and I were champion golfers and played famous courses, which influenced our design features," Dye said in a 2018 interview.

"I think our golfing ability was significant to our design work. It helped us to make tees for all abilities, as we truly understood the game. I have worked hard on playable yardages for women," she said.

Her "Two Tee System for Women" was cutting edge, encouraging clubs to introduce an additional set of forward tees for women.

"Alice was certainly a pioneer and inspiration to us all regardless of gender, but she blazed a trail as only she could for great architects like Jan Bel Jan, Vicki Martz and Cynthia Dye McGarey to follow," ASGCA President Jeff Blume said. "She will definitely be missed."

A leader in golf administration, Dye served on the USGA Women's Committee and USGA Handicap Committee, the LPGA Advisory Council and on the Board of the Women's Western Golf Association.

The Dyes' golf course legacy stretches far beyond the courses they designed themselves. Many of golf's leading course architects honed their craft while working alongside the Dyes. The couple's sons, P.B. Dye, ASGCA, and Perry Dye, ASGCA, have also gone on to develop their own golf course design portfolios. Many other members of the extended Dye family are now also involved in golf course architecture, including their niece, Cynthia Dye McGarey, ASGCA.

Alice Dye received numerous awards and honors, including inductions into the Indiana Hall of Fame and Florida State Golf Association Hall of Fame; The Heritage of Indianapolis Award; the Don Rossi Award for Lifetime Contributions to Golf; the Women's Western Golf Association's Woman of Distinction Award; and the PGA of America's 2004 First Lady of Golf Award.

For the full article visit: www.golfcourseindustry.com