0 All by myself at Meridian Sports & Social Club

Meridian Sports & Social Club is a community-focused sports club based in Charlton, South-East London. The site lies just a stone's throw across the Thames from London City airport, the O2 in Greenwich and the Thames Barrier, and only ten miles from the centre of London. Head Groundsman, Tony Provan, has had his fair share of ups and downs in his career so far, much of it of his own making.

Tony Provan is a big Charlton Athletic fan and dreamed of working for the club, so when the opportunity of work experience came about whilst at school, he jumped at the chance. "They had me painting walls in my first week but, at the same time, I was always keeping an eye on what the groundsmen were doing out on the pitch. So I decided to ask Paul Geary, the club's head groundsman, if could I join his team for my second week and work on the pitch. Luckily for me, he agreed."

"At the end of my work experience, I expressed my interest in the job and how much I had enjoyed it. Paul told me he had been impressed with what I had done and offered me an apprenticeship once I left school; and he kept to his word. I spent eight years at the club. I was then offered the chance to be Head Groundsman at Brentford."

"Being honest, whilst I was at Charlton and Brentford, and being a young lad working around players like Scott Parker, I got caught up in the stars and couldn't get out of it. In 2008 and just twenty-three years old, I had taken the head groundsman job at Brentford, but unfortunately my lifestyle let me down and it got to a point where I would rather be in the pub. My ego, at that time, got the better of me, and I believed in my own hype - and eventually I got found out."

"I had to get away and take a good look at myself, which I eventually did. After three years of being a complete wally, it was my then wife who helped me turn my life around and encouraged me to get back to doing what I love, which is groundsmanship. It's only when you grow up, look back and think, if only I had put in the effort I do now, where would I be? It does frustrate me, but I'm happy. I've learned from my mistakes in the past and have become a much stronger and rounded person for it." 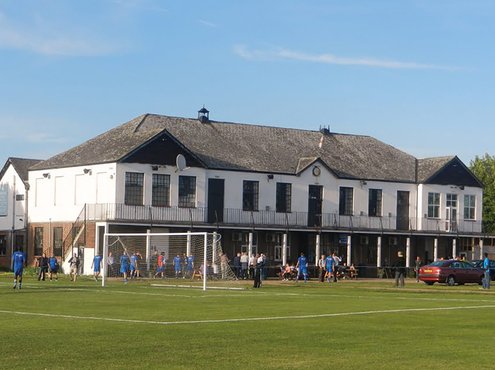 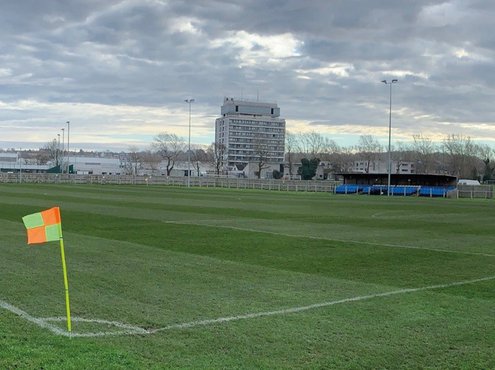 In 2011, I was given a chance to get back into the industry working at Meridian Sports Club where I worked for a couple of years until I was offered the Head Groundsman job at Gillingham in 2013. I put my all in until we agreed to part ways. Immediately after that, I worked for a contractor working at Charlton Athletic training ground doing some renovation work and installing drainage. Then, after speaking to the chairman here at the Meridian, who I had always remained in contact with, he told me there was a position at the club and asked if would I like to take it. I was more than happy to take him up on his offer, and I have been back here since December 2015."

So far, Tony has gained his NVQ Levels 1 and 2 in Sportsturf and would like to take Level 3, but the cost, alongside work and looking after his kids, gets in the way.

"I was going to do the Level 3, but the financial situations at the clubs I worked at didn't allow it. I still plan to do it in the future. I have also gained my PA1, 2 and 6 spraying certificates. I do recommend to any young groundsperson or greenkeeper that they should 'grab with both hands' any opportunities given to them to further their education."

Looking after the site on his own, Tony is responsible for the upkeep of one full-size first team pitch with a small stand, dugouts, catch nets and floodlights, along with four full-size pitches used for Sunday league football, and 9v9, 7v7 and 5v5 pitches. All are constructed on a 30/70 rootzone mix. There is also a full-size 3G pitch. These pitches must cater for forty-two teams ranging from under-eights to adults. 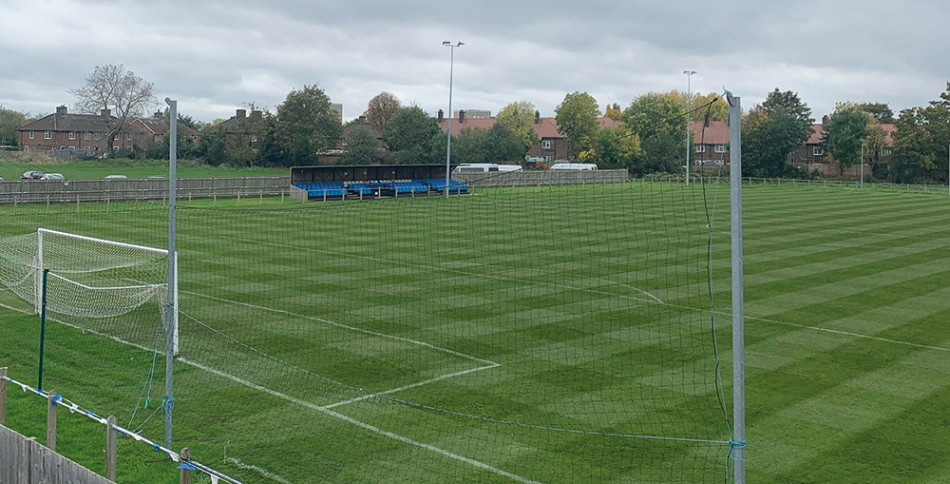 None of the grass pitches have any drainage or irrigation to speak of, except for a mains hose used to water any hot spot areas in summer on the main pitch. "It can be very frustrating in the summer watching them burn off when you have just got the pitches where you want them, especially the first team pitch. I have put plans forward in the past for an irrigation system and, to be honest, I bang that drum nearly every week in the summer. It would be great to have a system put in, but I fully understand the club has other plans and issues to address in the clubhouse first."

It is clear that Tony has a massive challenge on his hands when it comes to providing the standard of pitches he has been used to in the past. Nevertheless, he does what he can with a limited budget. This effort is starting to reap rewards as Tony recently won Groundsman of the Year 2019 from the London FA. "It can be frustrating at times not having the funds available, even though I knew what I had to deal with when I took the job, and I accept that. My difficulty is, having worked at places where we had the means to carry out the correct practices and do things right, I just wish I had the same here. I don't miss the rubbish and stress you sometimes have to deal with at professional football clubs though."

"As I have said, I don't have much of a budget, but that does not mean that the club don't support what I'm trying to achieve here. They give me what they can, and I do enjoy the challenge. It was a proud moment to receive the award after all the hard work I have put in. It's been difficult at times, but it's always good to get nice comments from people; it means a lot to me." 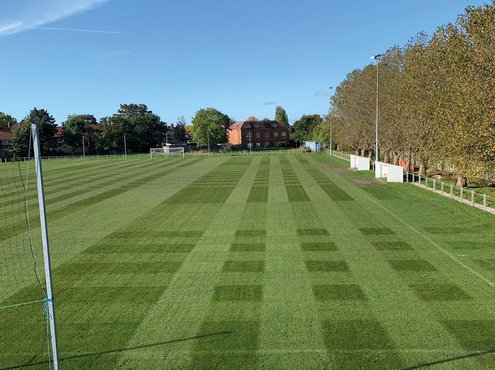 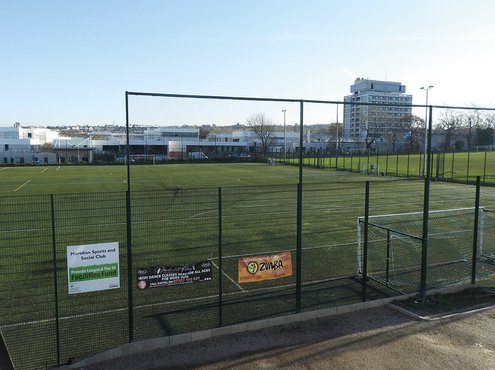 Tony has a limited amount of machinery available to him, so the maintenance of the pitches is restricted. "I cut at 27mm all year round using a Toro 3100 Reelmaster which gives a great cut and is reliable. In summer, I will cut all the pitches at the beginning of the week to tidy them back up after play over the weekend. I will cut again at the end of the week to stripe them up for the games. Cutting in winter is a matter of if and when. I would like to scarify the pitches a few times a year and have the means to pick up the debris after training or matches. Unfortunately, I have to keep to the most basics of basics, and this goes against what I have been taught in the past; again, this can be frustrating. With the amount of football that is played here, I would say the players do the scarifying for me. When I have time, I will go out and put the biggest divots back to try and keep the levels. I knew what I had to work with when I came here, so I'm not complaining and, in the future, we may have the funds to add some extra items of kit; fingers crossed."

Aeration on the pitches is carried out by a local contractor when funds are made available. "I would like to get the pitches verti-drained every one or two months, but I generally only manage to have them done twice a year."

Tony is only able to fertilise the first team pitch, using a conventional 12:4:8 granular, every eight weeks. "It's a bog-standard fertiliser, but it gets me through the season and does the job; it's an 'if it's not broken, don't fix it' type of approach."

Renovation of the main pitch consists of a light topdress with sixty tonnes of a 70/30 rootzone mix to help hold the moisture in the ground. Then it is overseeded with fifteen bags of a ryegrass seed mixture with a Vredo disc seeder two ways. "Ideally, I would like to Koro off, if we had the funds available, but with the lack of irrigation, it would be hard to re-establish. 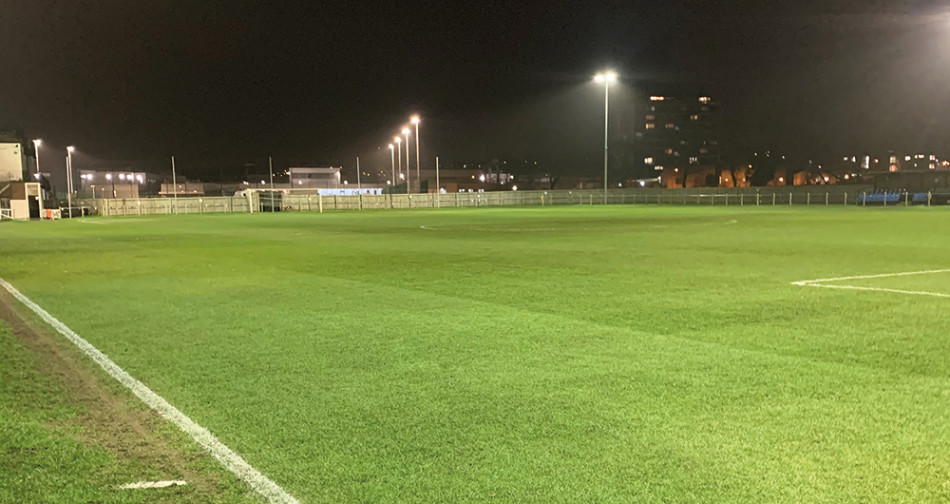 One piece of kit Tony would like to invest in would be a Dennis G860 with scarifying and brush cassettes. "This one machine would give me a lot more options and would help me achieve my goals; this would be the dream."

The pitches suffer heavily with worm casts throughout the year. "It's an absolute nightmare here when it comes to worm casts, and I can't emphasise how much of a problem it is for me. I can get the pitches cut and striped up then, as soon as the worms come up, it can look like someone's just played on them; it kills me. I have asked for a dragmat on several occasions to help disperse them, but as yet to no avail."

Finally, I asked Tony the question I like to ask everyone I meet; what is the state of our industry at the moment, and what can we do to help bring in new blood? "I think the job is poorly paid and underappreciated within a lot of organisations for how hard people do work and the skills involved in providing a quality playing surface. I do believe the industry has more coverage on TV than it has ever had in the past, and I hope this can generate more interest to those looking to start a career in our industry. I think articles from yourselves and various other organisations, and also getting stuff out there on social media, can help promote our industry to a wider audience. The more we explain what we do and the opportunities available, the better chance we have of attracting young people."