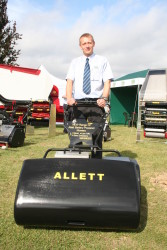 Allett is aiming to have a battery-powered pedestrian cylinder mower ready for commercial sale in time for the 2010 grass-cutting season. The result will be a mower combining very low levels of noise and vibration with no risk of fuel or oil leaks and no harmful emissions at the place of work.

Shown in prototype form at IoG SALTEX 2009, the Buffalo 34E is the first in a planned series of Allett electric mowers which, if testing this winter proves successful, will ultimately encompass models with cutting widths of 20in, 24in, 27in and 34in. All will utilise the same cutting units as found on the company's current range of petrol-engined machines.

Powered by a 24 volt battery system of the type commonly found on electric golf carts, the prototype Buffalo 34E has two electric motors - one driving the rear roller, the other driving a standard 34in (864mm) wide, 8in (203mm) diameter cutting cylinder fitted with eight blades. Projected mowing life for a fully-charged battery is around three hours, depending on grass lengths and gradients.

Electronic motor controllers enable both the speed of the cutting cylinder and forward travel to be adjusted by the operator on-the-move to suit mowing conditions and the final finish required. Up to six different forward speeds can be dial selected, four covering the normal working speed range with two slower speeds available for mowing in confined or awkward areas, for example, when negotiating trees, flower beds or buildings. A selector switch for powered reversing is also included.

As the Buffalo 34E uses the same proven cutting unit as its petrol-engined counterpart, the main focus of testing this winter will be on the performance and 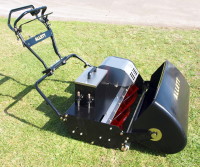 reliability of the battery pack and electric drives powering the rear roller and the cutting cylinder.

when cutting a sportsfield, public park or domestic lawn. The company plans to clock-up 1,000 hours of indoor testing of the prototype mower over-winter, to be followed by pre-production trials on turf in early spring 2010.

Although pricing is yet to be finalised, Allett is hoping that a battery-powered Buffalo 34E will cost around the same as its petrol-engined equivalent, currently priced from £4,500 (+ VAT).