British made Allett Mowers are the choice of the majority of the FIFA World Cup football venues in Russia. Allett is by far the top selling pedestrian mower brand for the very prestigious tournament, supplying a total of over one hundred and eighty-five units of mowers and accessories across eight stadiums and thirteen official training grounds.

The process of taking Britain to Russia and winning the mower business for the World Cup venues started about two years ago when Allett's Export Sales Manager, Dave Allett, made a series of presentations at two seminars and demonstration days. Allett's Russian distributor Unisaw followed this up by investing in demonstration machinery and carried out more demonstrations at the stadiums and training grounds. Unisaw are a particularly strong dealer and it was the combination of Allett products and Unisaw's supply and support that resulted in success.

"I recently participated at a wonderfully well-run and attended seminar in Moscow, all organised by Unisaw" says Dave, "and took the opportunity to present Alexander Markin, the CEO of Unisaw Group, with two awards, one for outstanding sales achievement - Russia was our biggest single export market last year - and the second for service excellence."

Dave attributes this great British success story to the products being chosen for their ease of use and high performance, which makes them ideal for sports turf surfaces, coupled with the exceptional sales efforts of Unisaw. "We offer a comprehensive solution: high-quality equipment for the care of football fields and constant service support, and our partnership with Allett is a very important part of this. Our company has all the necessary skills and takes great responsibility. We are ready and willing to share this with the stadiums, both before and after the games. Our specialists will work very hard on a special schedule, travelling to the facilities to assist at any time." Says Alexander Markin, CEO of Unisaw Group. The main mowers supplied to the stadiums and training grounds are the Allett C34, together with cartridge accessories, the Regal 36, Buffalo 34 and RM34 models. The Allett C34, in the Allett professional mower range and powered by the Honda GX200 engine, offers in one machine the capability of performing up to eight different turf tasks. The cartridge head options include a six or eight blade cutting cylinder, powered scarifier, verticutter, brush, sorrel roller, turf rake and scarifier. 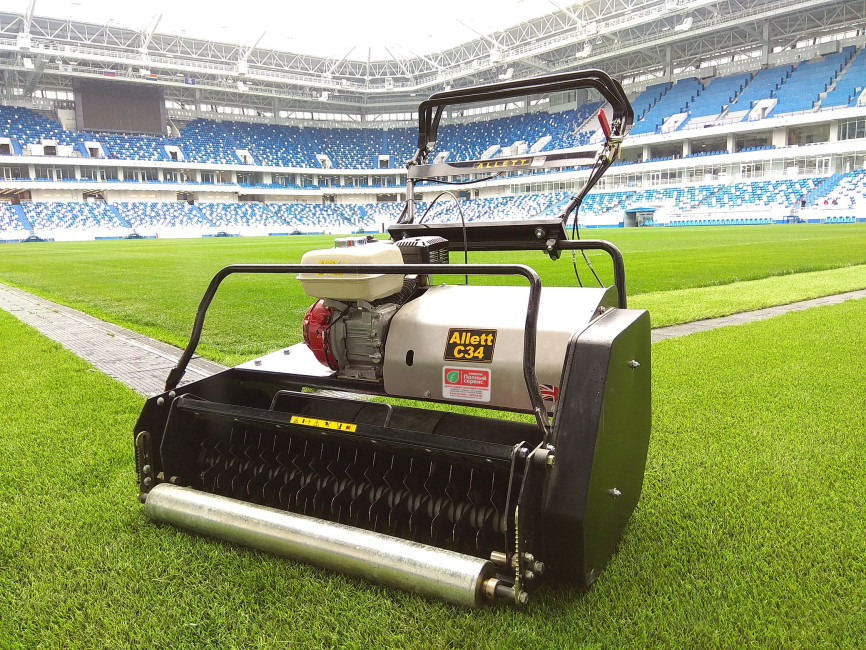 The Regal is regarded by groundsmen around the world as the ultimate large area dedicated mower for sports grounds, cricket pitches and other large grass areas. Hydrostatic forward and reverse drive with infinitely variable mowing speeds, power steering and compatibility with an optional trailing seat, combine to make it the prime choice for precision mowing with sharp, defined stripes on the turf.

The RM34 is a rotary stadium mower, which was designed around feedback from stadium groundsmen, with a full width rear roller to produce perfect pitch stripes. The twin contra-rotating blades and high lift system vacuum speedily and efficiently lifting debris, providing busy grounds staff with greater capability in the post match clear up, and for mowing higher when grass is being grown in.

Most of the eight Russian stadiums such as Kaliningrad, Rostov-on-don, Ekaterinburg and Saransk, to name but a few, ordered three Allett C34's and two Regals each. Sochi Fisht stadium has four Allett C34's, two Allett Buffalos and four Allett RM34 mowers. The Unisaw supplied training fields took thirty C34's and fourteen RM34's between them. In all, a major British export coup for Allett Mowers. 01889 271503 www.allett.co.uk