by Simon Brown
in Industry News, Machinery & Mechanics, and People
on 21 May 2017 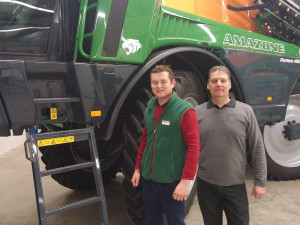 Due to the continuing expansion of the business, Amazone Ltd has strengthened its service team, both in the field and within its in-house product support. The first of the new-starters is Chris Wilson who joins the company as Territory Area Service Manager for Northern England & Scotland whereas Oliver Watson takes up a new, office-based role in Harworth, Doncaster.

Since his teens, Oliver, a qualified sprayer operator, has been involved in farming and, having studied agriculture to degree-level, has gained substantial experience of arable farming by both being sat on a tractor seat and by mending the kit at the same time. His time pre-Amazone also included a spell with a local Amazone dealer before resuming his studies. Steve Clark, after-sales manager at Amazone explains the rationale behind Oliver's appointment, 'As the kit in the field becomes increasingly complex, this new role, based here in the service office at Harworth, is designed to broaden the level of support to both the end user as well as underpinning the level of knowledge of the nationwide dealer network. He will also give backroom support to the Amazone field service team'. Oliver's practical knowledge of farming has stood him in good stead already this spring handling the dozens of calls coming through to the office from customers looking for help in setting up spreaders with the multitude of fertilisers that are in Great Britain from around the globe.

Chris Wilson, who will cover from Northern England up to the Scottish Isles, started out in farm machinery by doing his apprenticeship in the workshops at one of Scotland's biggest Amazone dealers. After completing his qualifications, Chris also went off to the sharp end to sample some practical farming having five years on a mixed livestock and arable farm, either in the farm workshop involved in keeping the kit going, or out in the field behind the wheel. After a short spell back in the dealer trade carrying out demonstrations and installations, Chris then went on to perform a similar role to his new position with the UK arm of another European machinery manufacturer where he stayed for 16 years before taking a year or two out of the trade. With this background, Chris joins us with a plethora of experience in the world of agricultural machinery and, with his strong knowledge of electronics and high-tech kit, is able to offer a top level of support to our customers in conjunction with our long-established dealer network. Again that practical farming experience, which includes being a dab hand with a plough, will go a long way in ensuring that Amazone purchasers can get the best out of it in the field.

After an intensive and extensive period of factory training, both Chris and Oliver are now settled down into their respective positions and we wish them every success in their new careers.