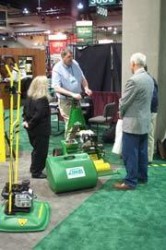 The show attracts thousands of exhibitors, let alone visitors, many of whom travel from all corners of the globe to view the latest innovations and techniques developed in the Industry. It is the ideal opportunity to meet many different people, and there was again, a strong contingent travelling over from the UK. Amongst the exhibitors were some well-known British based names, including AFT Trenchers, Blec, Bowcom, Elmwood College, GreenTech ITM, Myerscough College, Tacit and SISIS.

On the SISIS stand, I met up with an ex-patriot, Ian Camp, a gentleman whom I have enjoyed speaking to on a number of occasions during my visits to the states. I wondered why Ian had decided to 'up roots' so to speak and emigrate to the USA, and so we managed to catch a few quiet moments during the show for an interview.

Dave: Ian, when did you get involved in the industry and why?

Ian: I got involved in the turf industry almost by accident. It was not by design, certainly in the early days of my job search. I was the General Sales Manager for the Marine Safety Division of Dunlop a long way removed from turf. Dunlop was sold to BTR and our division was to be absorbed by the BTR's division doing the same thing. I opted for redundancy rather than move, as our two eldest children were at a fairly critical stage of schooling and I did not want to disrupt their schooling, in the same way mine had been as a son of a soldier who got moved around fairly regularly. Having been out of work for some 11 months, I applied for a sales managers job advertised through a recruitment agency in Manchester. On arriving at the interview I found that the company, SISIS, worked in the Turf Industry.

I was fortunate enough to get the job, but was naive enough to wonder how one filled the day and motivated a team of salesmen to sell Turf Maintenance machinery. I was so uninformed at that stage that I, like many others not in the industry, thought that turf maintenance was just grass cutting! How quickly that changed and I realised that growing grass and playing all sorts of sports on it and at all times of the year in all weathers was a real science and profession. It was a very steep learning curve, but one that I thoroughly enjoyed and have continued to enjoy.

Dave: How long have you been with SISIS? 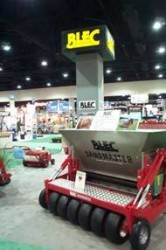 Dave: What experiences have you had throughout your career in the industry and what highlights have their been?

Ian: I think that life is one long experience, some good, some great and the odd one that you would rather forget!

Since I started with SISIS the job has bought me into contact with lots of very interesting people and taken me to some fascinating places around the world. Not all of them would I choose to visit again, but fascinating nevertheless. Whilst it has been a great experience and a privilege to stand on some of the most hallowed sports turf around the world, much to envy of many of my friends, it has been the educational experience that I have and continue to enjoy the most.

Meeting with all those people who have the task of maintaining turf, often in adverse conditions and against the odds, some with the added pressure of the work and its results on full view to the watching public via TV. Talking and listening to these men and women and seeing the pride they take in the work they do and the profession theyrepresent is an education in itself. I feel that, with one or two minor exceptions, they do not get the recognition they deserve or perhaps seek.

The players, the viewers, managers & committees are quick to complain about the state of the playing surface, yet how often is the Groundsman credited for getting the sports field ready for a game in atrocious weather conditions. Or the golf course super congratulated on getting a course ready for play despite several inches of rain in the hours before the game started or that the team have been working in the dark to get it ready for tee times early in the morning and will work again after the play ends for the day?

Not often enough in my book, end of sermon!

I love the challenge of hearing of the needs that they have and seeing what we can do to make their job better or in many circumstances a little easier. One advantage of dealing direct with your customers as a manufacturer means you have the best market research available, straight from the users!

It would be very unfair to pick out a particular sports venue as my highlight as I have enjoyed visiting them all, even if the particular sport is not of interest to me. Cricket is the sport closest to my heart, and it's a crying shame they don't play it over here! The highlights have got to be the countries I've had the privilege to visit, the highlight made all the sweeter when one is able to bring home the order as well!

Dave: How did you come to be in the USA?

Ian: The principle role of a sales manager is to manage sales and in my book that is a very pro-active role. The usual role of working with and motivating a sales team is one part of it, but I see the role of the sales manager to be a visionary, in other words, 'where do we go from here to lift us to the next level?' 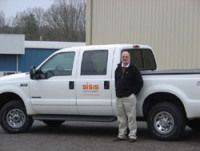 It was obvious to me, early on in my time that the company was so well entrenched in the UK market that we needed to look elsewhere for any major growth. I was able to utilise my exporting experience from my Dunlop days to get SISIS into some heretofore-unknown markets, which I am delighted to say my colleague, David Harrison has built upon brilliantly, to the benefit of SISIS and UK Ltd.

The one thing that really got under my skin was that we were so unsuccessful in the US market. I needed to know why and what we needed to do to change that around. The company tried various ways to break into the market, all with varying degrees of success, but none that reached the potential that I felt was clearly there. I was then fortunate enough to win a scholarship through the Department of Trade and Industry (DTI) to an intensive marketing course at the Richard Ivey Business School, which is part of the University of Western Ontario, in London Ontario.

What I learned on this course, other than I had been out of academia for along time and my brain hurt, prepared me to put some further, more scientific research into the US market. The short story was that I put together a seven-year market plan for the directors to consider. With their blessing they told me to go and prove it so I came to the USA for six months, leaving Sue my wife and family in the UK.

The six months were, according to the directors, to get the American arm set up and running. Now in the States I found myself with another very steep learning curve, finding out the various laws and regulations pertaining to doing business in the USA. We got the business off the ground and 5 years later I am still here. Sue joined me permanently in year two and we have set up our home in the town of Liberty, South Carolina.

Dave: How different is it working overseas, in terms of business, the people, quality of life etc? 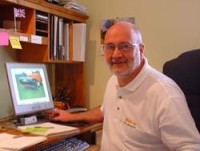 I have only lived overseas with this job and I am sure that the experiences and differences are marked depending on the country that you stay in. In some respects life in the USA is not vastly different to that in the UK, in others it can be as different as chalk and cheese. One of the differences that come to mind is the language. We may both speak 'English' but I think it was Winston Churchill who said in an address to Congress that "we are two peoples divided by a common language".

Sue and I are getting used to putting things in the trunk and not the boot, buying gas not petrol, walking on the sidewalk and driving on the pavement. When referring to 'sod' you are not being rude, just talking about turf! Another industry term that differs is you don't have pedestrian machines you have 'walk behind" or 'walking'.

The one that is peculiar to the south of the country is a form of dancing which goes by the unfortunate term of " sh---ing". Sh---ing lessons are given for this form of dance. I believe that David Taylor of BLEC can tell you more about this from first hand experience! The food in the south is different, a lot of fried chicken, fried okra, barbeque pork and the famous 'grits". The people are great, and on the whole the southern welcome is true, although I have to say wherever we go in the US we have received a great welcome. It may be the English accent but they do seem to give us time.

The climate in South Carolina is great; we do have four seasons, a very short winter (thank goodness as grey skies do me no good at all), a shortish spring then a long hot summer. The downside to the summer is the humidity, which can hover around 95% at times! The year ends with a wonderful fall (Autumn) and we have enjoyed 60-70 degrees as late as December. In fact in our first year out here, we had a picnic in the mountains on Boxing Day!

The quality of life is different not necessarily better, I don't think any country has it all, the UK has so much to offer that the USA cannot. Equally the USA has things that the UK doesn't. This covers the good and bad on both sides, but all in all, Sue and I feel it a privilege to be British yet live in the USA. The minor things we miss, well, good tea bags, English biscuits, ENGLISH CHOCOLATE, and proper sausages and bacon, though we may have solved that last one now!

The major downside to living in the USA is having two daughters, two sons in law and four wonderful grandchildren so far away in the UK.

To sum it all up, we, (Sue & I) love the people, our home and really enjoy the challenge of taking a new company from a standing start with a dream (a realisable dream) of making the US company bigger than the parent company by the time I retire!

We are on that road now, so watch this space!