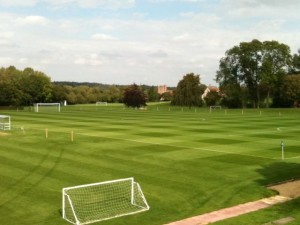 While Bradfield College in Berkshire is a centre of excellence for education it also has sporting facilities that are second to none.

The person charged with keeping these in tip top condition is Estate Manager, Anthony Hough, supported by a team of 14.

"The College is set in its own village and it is a beautiful place to live and work," said Anthony.

"There is also a passion to improve the standard of the surfaces and the College has been hugely supportive of what I have been trying to achieve and we are definitely making progress."

He says that like many in his position trying to maintain excellent surfaces under high usage with the UK's recent weather patterns has been challenging. Another challenge is that the College has an intensive programme over the summer.

He has also adopted a new fertiliser regime over the past two years which has seen the amount of nitrogen used halved, thus reducing costs while maintaining the quality of the pitches.

When it comes to grass seed Anthony has been pretty consistent since he was at Shrewsbury School.

"I started using Barenbrug products some six years ago after recommendations from other turf managers and I have not looked back since. The quality of the seed is excellent and the grass performs very well. I also like the way the company operates, it sets itself quality and purity standards that are higher than required while the knowledge and passion of the staff really sets it apart from its competitors."

The most widely used seed mix at Bradfield College is BAR EXTREME which is used on the cricket squares and 1st XI outfield as well as everywhere on the golf course except the greens where he uses BAR ALL BENT for its shoot density and disease tolerance.

On the football pitches Anthony has started using BAR 7 RPR and says that it has shown the ability to fill out areas better than standard perennial ryegrass. "I have just used this seed on two pitches and the results have been very good and I am looking forward to see how much better the wear tolerance and recovery is over the coming season," said Anthony.

BAR 7 RPR is already used by several Premier League Football Clubs on their stadium and training pitches as this creeping ryegrass offers faster establishment and unrivalled recovery after wear.

Concluded Neil Pettican from Barenbrug; "Research & development is at the very core of what we do as a company and it is always so rewarding to meet someone like Anthony and see what a difference our products are making for him with what he is trying to achieve at Bradfield College.

"We were also delighted to hold an open day at Bradfield College for turf professionals where we were able to give them a practical demonstration of renovating pitch surfaces and how important the choice of grass seed is."