0 Aquatic and Riparian Weeds - The war on weeds in water

Water can be one of the most valuable landscape features on golf courses and in parks, with aesthetic and environmental value, adding to leisure opportunities or providing a valuable source for irrigation. Streams, ponds and lakes also offer inviting growing conditions for a range of vegetation, some welcome and some not.

Control of aquatic (in water) and riparian (adjacent to water) vegetation presents some additional challenges as the use of herbicide products for aquatic use is tightly controlled. 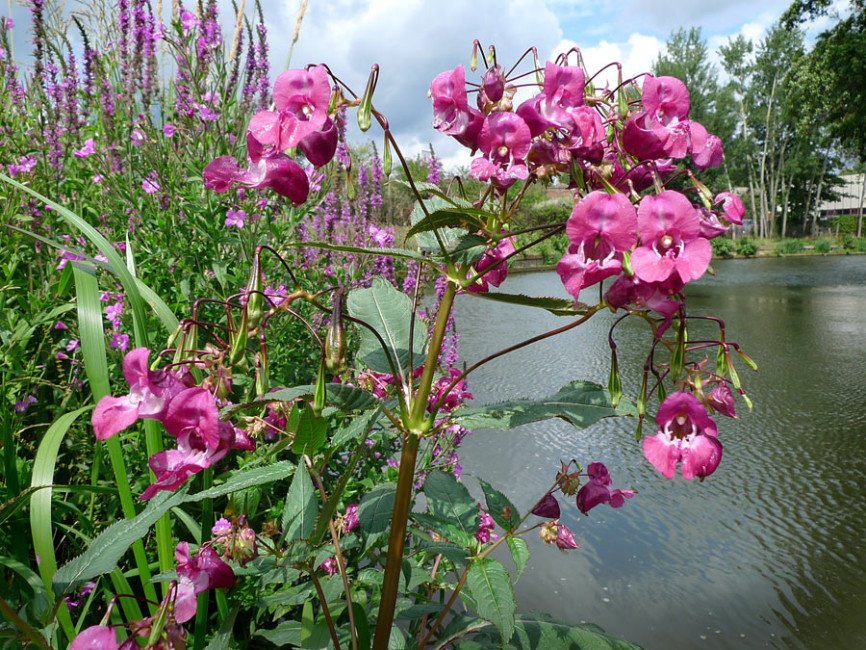 Plants are likely to be susceptible to herbicide treatment if they have a substantial part of their foliage exposed above the water surface, the maximum area of emerged leaf and at around the time of flowering, such as this Himalayan Balsam

Aquatic weed control specialist Dr Jonathan Newman of Waterland Management Ltd comments: "Riparian weeds can prevent access to water bodies, and submerged weeds can restrict leisure activities such as fishing or sailing, by clogging up the water. Emergent riparian weeds (usually reeds and rushes) can encroach into the lake or across a line of sight."

"Non-selective herbicides must only be used on those weeds that you need to control, and not used as a broad treatment, as they will usually kill most green vegetation, so applications need to be carefully planned."

Traditional cutting is often used to control aquatic and riparian weeds, but often fails to eradicate the problem, just delaying it for a while, suggests Dr Newman.

He adds that weed cutting boats and harvesters are always available for crisis management, but the problem will usually come back next year.

"Effective herbicide treatment usually gives significantly longer control of up to five years, and costs much less than mechanical control." 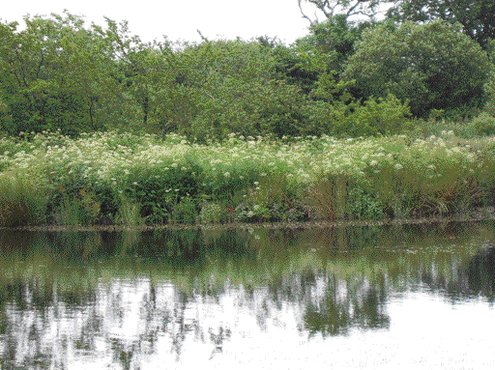 Timings are important - water lilies, for example, should be sprayed from mid-July to mid-August

Roundup ProActive and Roundup ProVantage can be used to control emergent and floating aquatic weeds in ponds, reservoirs, rivers, ditches, drainage channels and riparian situations. When used as directed, there is little risk to spray operators, wildlife or the environment and they may be safely used in waters stocked with fish.

When used as recommended, any water subjected to glyphosate may be used immediately for irrigation.

The best method of dealing with emergent riparian weeds is to spray with aquatic approved formulations of glyphosate from late August onwards, Dr Newman comments.

"Earlier applications will kill the emergent weeds, but they will regrow in the following year. Later applications tend to kill the roots and rhizomes much more effectively, preventing any regrowth."

"Submerged weeds are much more difficult to deal with now, as there are no currently approved herbicides for use on them."

Weeds with floating leaves, such as water lilies and some pond weed species, can be treated from about June onwards, at a slightly higher application rate than that used for emergent riparian weeds.

Submerged weeds can be controlled in water deeper than about 1.2m by using blue dyes to absorb the red light which plants use for photosynthesis.

Floating algae can be controlled by using bacterial sachets that compete with the algae for nutrients, or by the use of hydrogen peroxide generating compounds, which oxidise the algae and kill it off.

Dr Newman says: "The control of trees and cut tree stumps on watercourse banks has always been a problem, as previously approved products for such purposes, such as triclopyr or picloram, are not approved for use in or near water. Developments to Ecoplug Max now allow safe application of high concentrations of glyphosate to trees and tree stumps near water without the risk of spray drift."

It has a new formulation and is now authorised by the Chemicals Regulation Division, (CRD), 'for use in all situations, (stump)'. This means that it can be used on land immediately adjacent to aquatic areas as well as stumps growing in water.

Under an Extension of Authorisation for Minor Use in standing trees, the plug may now also be used where felling is not possible, by inserting plugs from the side of standing trees and leaving them in situ.

Plugs are used in a similar method to stump control applications, but should be inserted from the side of the tree, evenly spaced around the trunk just above ground level.

As a general rule, plants are likely to be susceptible to glyphosate if they have a substantial part of their foliage exposed above the water surface.

Plants are generally most susceptible when they have the maximum area of emerged leaf and around the time of flowering.
Emergent weeds Timing: Spray Watercress in June, Bulrush in late July, Water lilies from mid-July to mid-August and most other species from mid-August to mid-September.

"Whilst not very widespread, these species cause immense problems where they are present, and incur very large costs for management."

"Some of these species, including Floating Pennywort (Hydrocotyle ranunculoides), Parrot's Feather (Myriophyllum aquaticum) and Water Primrose (Ludwigia grandiflora) tend to be more resistant to glyphosate treatment because they either metabolise the herbicide very quickly, excrete it though their extensive root systems very quickly, or have waxy cuticles that prevent entry of the herbicide into the leaf."

"This problem can be overcome by the use of aquatic approved adjuvants, which sticks the herbicide to the leaf surface providing, in effect, a slow release formulation that allows sufficient herbicide to be taken up by the plant to provide a lethal dose."

The main factor in getting good control of any aquatic or riparian weed is correct timing of the application, he points out, along with continuous monitoring of any that escaped treatment or have started regrowing after application.

"Good selective weed control allows other more favourable species to recover and become dominant. Generally, a weed control programme results in a more diverse plant flora, as the mono-specific dominant weed growth has been eliminated, opening up the habitat for less aggressive species."

Weeds not well controlled by glyphosate

Glyphosate will not control submerged weeds or algae. These include the true pondweeds or Potomegeton, of which there are over twenty species, and the more common Elodea Canadensis (Canadian Pondweed) or Largarosiphon spp (Waterweed). Poor results can also be expected on Ranunculus aquatalis (Common Water Crowfoot), Hippuris vulgaris (Mare's Tail) and Myriophyllum spp (Water Milfoil). 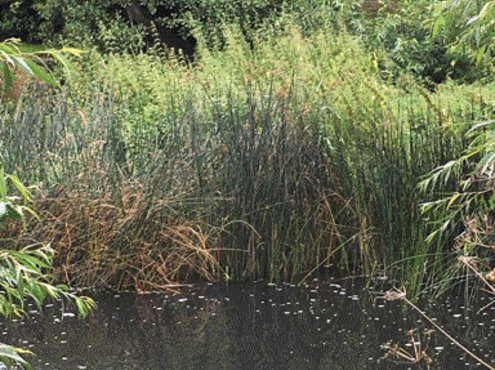 When used as recommended, any water subjected to glyphosate may be used immediately for irrigation

Check with the Environment Agency, Natural England, Scottish EPA or Natural Resources Wales to establish if the proposed treatment area is under any environmental or European schemes which may need to give permission for herbicide application.

When considering treating weeds along streams and ditches, consider the overall effect of removing the targeted weeds and ensure bank stability and erosion would not result from total weed control. Spot treatment is preferable, unless the weeds have taken over the whole area.

Where a large proportion of the watercourse is congested with weeds in the presence of fish, de-oxygenation caused by decaying weed vegetation can be avoided by phased treatment over a period of several weeks.

Minimise drift by choosing low drift nozzles and treating only when wind conditions are within safe spraying limits.

Spray when rain is not expected for at least four hours.

When used according to the label, there is no adverse effect on other wildlife as glyphosate is not metabolised by fish, birds, insects, amphibians or reptiles. Glyphosate is degraded by the microbes naturally present in the water and sediment.

In common with other forms of weed control, land managers must abide by relevant legislation. For glyphosate, that means the Plant Protection Products (Sustainable Use Regulations 2012), whilst specifically for some algaecides this means the Biocidal Products Regulations and the Control of Pesticides Act.

The Habitats Directive prevents spraying of emergent vegetation when birds are nesting. Care must always be taken to prevent any drift on to non-target vegetation, and the use of coarse droplets is recommended to assist in achieving this.

All aquatic use of herbicides requires Environment Agency Approval, even where the water body is privately owned or does not drain into a watercourse. Form AqHerb01 should be requested from the local EA office, filled in and work should not begin until consent is given.

Remember that Grandfather rights have recently been revoked, so anyone born before 31st December 1964 will need to be fully qualified if they are applying herbicides to someone else's land or water, in the same way as younger operators.

BASIS qualifications in Aquatic Herbicides are required by anyone giving advice on aquatic herbicide usage.

Glyphosate products are available from the Pitchcare Shop