0 Ascot Racecourse - All in the planning

Preparation and teamwork are everything at Ascot. Renowned globally for the five-day Royal Meeting in June, the independently-owned and managed Berkshire racecourse also hosts key jumps fixtures over the winter and, in 2011, launched QIPCO British Champions Day, a high profile international flat racing fixture which is a key part of the season's grand finale in October. 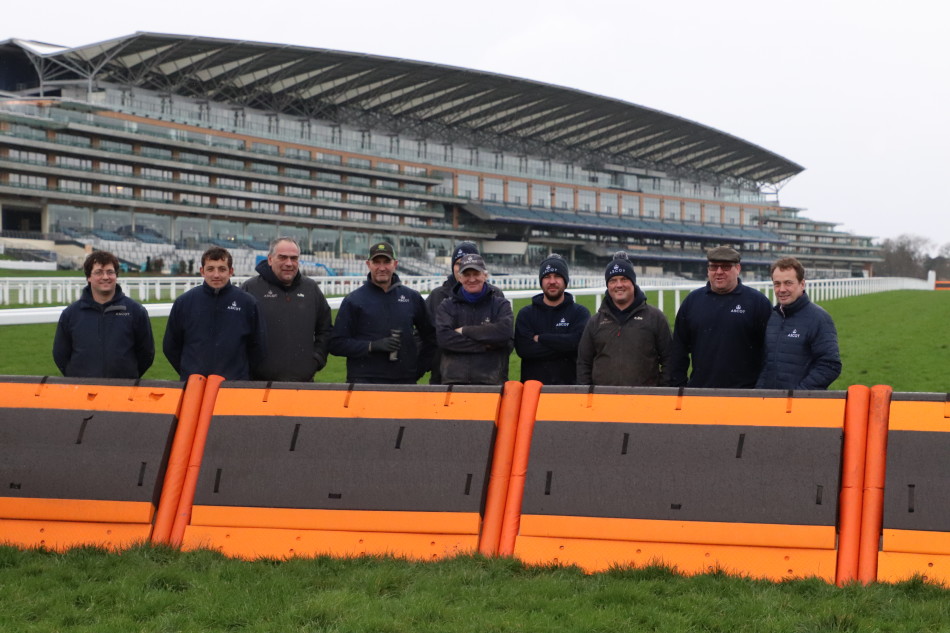 "We always knew that the timing of QIPCO Champions Day would make it vulnerable to wet weather," explains Clerk of the Course Chris Stickels. "We even looked at using rain covers to protect the turf and, whilst the costs and required infrastructure were prohibitive, the practicality of removing covers when it might still be raining, creating inconsistencies and all sorts of other problems, was the real barrier."

By 2014, the Ascot team had hatched a contingency plan which would make effective use of the twenty hectare racing surface which nestles between Ascot high street and the main routes to Windsor. Chase and hurdle races are run on the inside of the round flat course which meets the mile straight in front of the Grandstand, made famous by the Royal Procession, where the Queen's carriage leads another three landaus, opening each day of Royal Ascot.

The National Hunt (jumps) track is left largely unwatered during the summer months, with just enough irrigation to maintain grass growth in a dry spell.

"We'd mapped out the rail alignment to allow one and a quarter, one and a half and two-mile races to be run on the jumps track part of the round course, creating an 'inner flat alignment' on ground used for the hurdles in the winter and offering better footing in wet conditions. The straight is not such an issue as it was rebuilt on a sand and gravel raft when the track was redeveloped in 2004-2006, although the organic matter has increased over time, and it does hold more moisture now." An aerial view of Ascot shows how the national hunt track sits on the inside of the flat running line, and gets a hammering from the crowds during the Royal meeting / Extreme wet conditions in autumn 2019 took their toll on the chute onto the course, which was sanded for safety

Drainage works have not been neglected on the round course, with sand slitting, sand banding and topdressing ongoing since 2004, but the unprecedented wet autumn of 2019 meant that the inner flat alignment plan had to be used for the first time.

The mammoth effort by the grounds team to prepare both tracks for Champions Day involved six men, moving two and half miles of rail by hand, minimising any vehicle movements on the sodden turf.

"It was a lot of work moving the rail, but thanks must go to the team who are really keen and were well prepared for it," Chris comments. "With several Group 1 races on the card, the plan was always going to generate discussion - in a normal year, the jumps course would be too firm and patchy for flat racing, but in those conditions it was ideal, and the verdict from the industry was favourable. In the end, it saved the meeting as parts of the outer course were waterlogged."

But, with the National Hunt season looming and the first meeting just two weeks after Champions Day, the pressure on the team was relentless, who now moved to repairing the track for the jumps fixtures.

"Fortunately, we were able to plan a wide alignment for the hurdles course, so the first time that ground was used again was for the December 20th-21st meeting, giving time for recovery," he says. 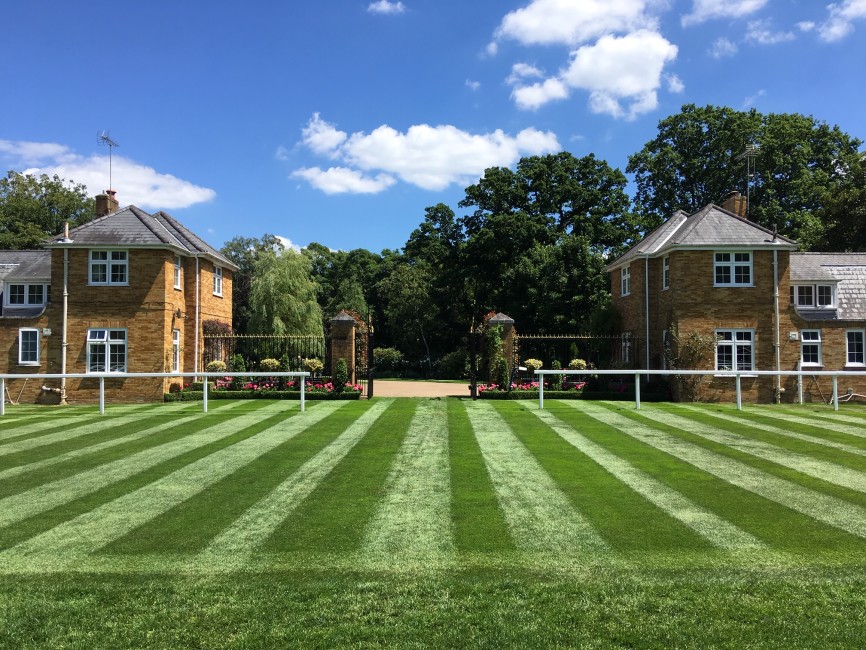 The famous Golden Gates, where the carriage parade enters the course at Royal Ascot

"The track is 'put back' the day after racing and, if conditions allow, we will verti-drain after every fixture," explains deputy head groundsman Donny Reece. "This repairs the surface and assists with drainage, taking the moisture through the soil profile, but you have to ensure the ground can take it. We also verti-quaked in summer when the conditions were hard, which has visibly improved root development."

With a busy racing calendar, being pro-active and taking advantage of any suitable opportunity for renovations is key, agrees head groundsman Reon Sanford.

"We use a GKB scarifier to remove thatch and weed grasses and then topdress. One of our more challenging areas is in front of the grandstand, which casts a shadow over the home straight and slows grass growth, but in 2019 we renovated this section in August and the turf is already more consistent."

The jumps track also gets heavily used by the crowds at the Royal Meeting where it is used for marquees and public viewing.

"It can get scorched in hot sun or cut up in wet weather, so we'll use penetrants and wetting agent and decompact with the Verti-Quake and Verti-Drain, followed by irrigation as needed - once it starts coming back it's important to keep on top of it and encourage the growth," says Donny. Five Briggs reels are backed up by pop up irrigation on narrower sections of the track / Where the straight crosses the new bridge over the Winkfield Road, the shallower soil means that the turf dries out more quickly, so more water is needed

Irrigation is handled by five Briggs booms, with Hunter pop-ups installed where the line is too narrow for the booms on the flat track; more pop-ups were added alongside an overhaul of the control software in 2016. Where the straight crosses the new bridge over the Winkfield Road, the shallower soil means that the turf dries out more quickly, so more water is needed here.

The 2006, £200 million redevelopment of Ascot included the installation of an extensive rainwater harvesting system collecting from the grandstand and other roof areas; this is directed into two lakes in the centre course and another across the road; water is also purchased if required.

Ascot has its own overseeder, but a Vredo disc seeder is hired in when a window of opportunity arises to improve specific areas, with pure ryegrass being introduced via mixtures from supplier Barenbrug.

Toro ride-ons take care of mowing duties in summer, with the jumps track left to grow on in winter unless a cut is needed in late February, whilst three Iseki cut and collect ride-ons are gathered from the lawns/paddock team to join forces with the two dedicated to the track to maintain the flat track, keeping compaction to a minimum.

Any suitable method of improving the surface or tackling a problem is considered. After success with an Air2G2 pneumatic decompactor to treat wet areas, a Charterhouse Oxyshot was deployed before the December meeting to target specific deep compaction in the parade ring and home straight. A Charterhouse Oxyshot has been trialled on compacted ground in the home straight and parade ring / The home straight with the grandstand, which casts a shadow for much of the year over the track, requiring extra attention to maintain turf growth

A GKB Drainmaster is hired in as needed and a soil recycler is also under consideration, with the goal of continually improving drainage and grass growth.

"We were using a lot of fungicides and wanted to find a way to improve soil health so that we could avoid these treatments," explains Reon. "It's possible to buy in compost tea, but we have found it easy to make."

Woodchip from the estate is composted along with grass cuttings, brewers' grains from a local brewery and mushrooms picked from the track in a 1000 litre IBC and turned by hand every two to three days whilst it matures over a 50-day period, before the compost is placed in a 'tea bag' in non-chlorinated water to produce the 'tea'. The liquid is then mixed with biostimulants and yeast extract before being applied via a John Deere self-propelled sprayer.

"The mixture needs to be monitored carefully for spores and beneficial nematodes, but it has proved highly effective in boosting the turf, and has eliminated the need for fungicides," comments Reon.

Whilsy pesticide use is minimal, the John Deere sprayer has been updated for 2020 with the addition of GPS guidance to cut input costs and increase accuracy.

Although Ascot is not tied into any particular manufacturer, Reon and Donny have good relationships with many of the leading suppliers, and green tractors dominate. Ascot mechanic Alex Leisk came from a John Deere dealership, so has an extensive knowledge of the brand. One Fit Pad hurdles were introduced for the 2018-19 jumps season and the team have seen the benefits of minimal breakages and easier handling compared to traditional brush hurdles.

"We have one member of staff who looks after the hurdles and he could be mending twenty broken hurdles a meeting, now he can focus on repainting and refurbishing as required, and the time savings are substantial," comments Chris.

Chase fences are rebuilt at the rate of five per year, and open ditches have been updated recently with the addition of Leylandii on the take-off side to improve definition and encourage better jumping.

Maintaining a full team of employed staff is preferred to using casuals. Including Donny and Reon, nine groundsmen look after the track, car parks, heath and outlying areas which totals 80ha, whilst a dedicated mechanic looks after the equipment. Five gardeners take care of flowers, plants and hedges and two more are responsible for the extensive lawned areas. Left: after scarifying and reseeding. Middle: new growth from divoting. Right: the parade ring and grandstand

"We have found it to be a better way of working. Permanent staff know their jobs and need less supervision, so we can get on; we have a great team here," explains Reon, who came to Ascot from New Zealand via golf course work in Ireland and Sweden, and initially worked under the course's longstanding head groundsman Gilly Gilford.

The effectiveness of the programme and the Ascot team's forward planning is evident in the track's ability to cope with a relentless, demanding and high profile fixture list alongside the vagaries of the weather.

"The effects of the dry season in 2018 could still be felt in spring 2019," reflects Reon. "Then it was wet into the run up to the Royal Meeting, but the track drained so well due to the decompaction and scarification that a track record was broken on the Saturday."

Team spirit was put to an exacting test in December 2019 - at the time of Pitchcare's visit, final preparations were being put in place for the popular Christmas Meeting. But, after 10mm of rain at the end of the first day of the meeting, the Saturday card had to survive two inspections, and required last minute realignment of the hurdles and a change to the rail configuration to create a usable racing line on the sodden ground towards Swinley Bottom. But, once again, Ascot's grounds staff pulled out all the stops to produce a day of racing fit to kick off the festive season in style.