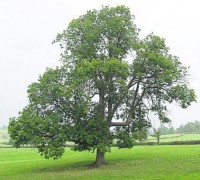 Walkers are being asked to join the fight to stop a deadly disease threatening Britain's ash trees.

The government announced a ban on ash imports on Monday in a bid to stop the spread of Chalara fraxinea ash die back, which has already killed 90 per cent of Danish ash trees and was been found in the East Anglian countryside last week.

The disease was first identified in the UK in imported trees in February, and has been found in nurseries and recently planted sites, including a car park and a college campus.

Around 100,000 trees planted in the last five years have been destroyed, while the Forestry Commission said staff had been taken off other duties to survey for the disease in East Anglia, the South East and East Midlands.

The ban, which aims to stop further spread of the fungus, is being put in place before the main tree-planting season gets under way in mid-November. Trade bodies had already been encouraging members to observe a voluntary moratorium on imports.

Chalara dieback is easier to spot before the end of autumn as it can be identified from damaged leaves.

The University of East Anglia has launched an ''ashtag'' app which allows anybody to send a photo of diseased leaves, shoots or bark to plant pathologists who can identify whether the tree is infected.

The app uses geo-tagging software to give a precise location of trees, allowing experts to build up a picture of where the infection is found. People without smartphones can upload images at the website www.ashtag.org

The Forestry Commission said that while infected trees from nurseries and recently planted sites were being destroyed, those in the countryside were being left while the focus remained on surveying for the disease.

The fungus will not be sending out spores, which would spread the disease, before the spring, giving officials time to decide on the best option for managing the disease.

Infected sites remain open, but visitors are being asked to clean footwear to avoid spreading the disease any further.

Shadow environment secretary Mary Creagh accused the Government of being ''asleep on the job'', and of funding its forest research body at a minimal level, leaving officials with no capacity to tackle tree pests and diseases.

She said the Government had cut the Forestry Commission's budget by 25%, and reduced forest research funding from £10 million to £7 million a year.

''Those cuts reduced the Forestry Commission's ability to identify and tackle tree disease.''

Experts had been calling on the government to ban ash imports for months before the first case was found in Britain.