by Louise Prettyman
in Machinery & Mechanics
on 30 Jan 2016

The INFiNiSystem30 from Advanced Turf Technology (ATT) has won the Horticulture Week What Kit? Pedestrian Mower of the Year award for 2015. Announced in December, the 30 inch pedestrian unit was chosen as the winner from a shortlist of 8 machines. 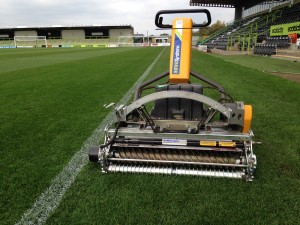 The pedestrian award citation said that although the concept had been around for a few years, with the 22" and 26" models, "building it in a bigger size is not as simple as just stretching the machine. It means new calculations and fresh engineering. ATT has done well to present a 30" unit that is ideal for pitches and large areas of grass. The machine is really well built and has the advantages of low vibration, low noise and no emissions when the battery is used. The way the head floats independently of the traction unit is brilliant. It is precision engineering giving precision mowing. But it is also more than a mower - it's a complete system and very well thought out… they have thought of everything and yet it shouts simplicity."

First previewed at BTME 2015, the INFiNiSystem30 was developed to cater for the needs of the Groundsman. A 'true hybrid', it can be driven either fully electrically via a single or double battery module or by hybrid electric via an engine generator configuration. A recent study at a football club that uses a petrol mower found that fuel costs per mow were £3.52. Based on 10 cuts per week, for 49 weeks of the year, the total fuel expenditure worked out at £1,724.80 per mower. Mow the same pitch with the electric ATT 30" INFiNiSystem™, the same number of times per week and weeks per year, and the club could save a staggering £1,592.50 a year per mower. In simple terms, you can mow a full size football pitch for less than 50p!

Celebrating the best in professional machinery, WhatKit? Mower of the Year Awards were also awarded to mowers in ride-on and tractor-mounted/towed categories.