In recent years, the restrictions on the availability and use of plant protection products in Europe have increased. Two years ago, the experienced groundsmen Jan Dijkhuizen and Mathieu van Borkulo of AZ Alkmaar, took a very important step in anticipation of this European policy. In 2018 they exchanged fungicides for preventive treatments against grass fungi with UV-C light and since then the AFAS Stadium pitch has been completely fungicide and fungal free. 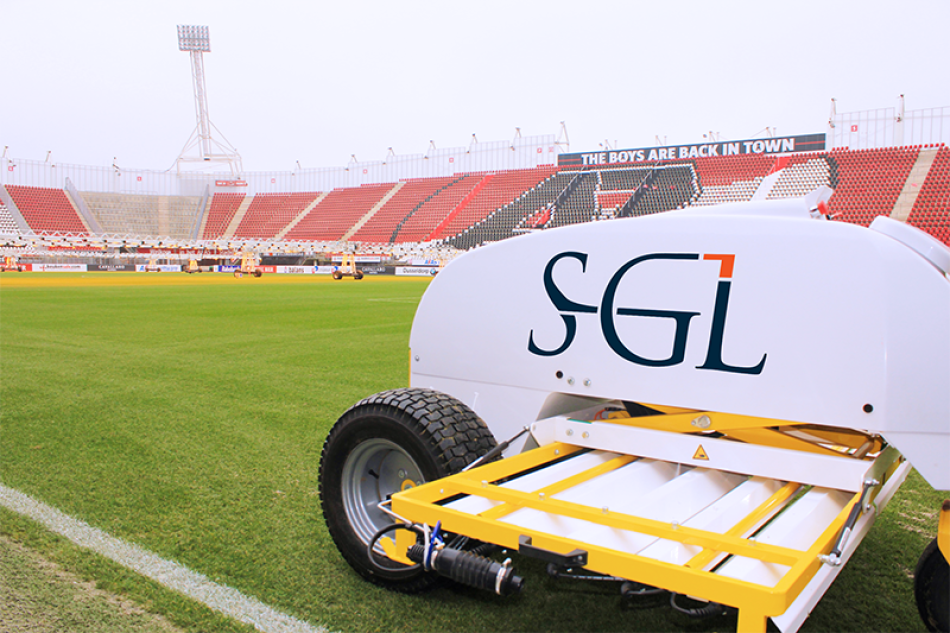 UV-C light has already been used for a long time to kill bacteria and viruses, for example for purifying water, but it has only recently been used to combat leaf fungi on grass sports playing surfaces. Agronomist Gerard van 't Klooster of SGL: "Simple organisms on earth, including fungi, arm themselves against everything that occurs in nature, but not against UV-C light. UV-C light is part of the sun's UV radiation, but is blocked by the ozone layer and therefore does not exist on earth. If you affect the DNA in a simple organism, the entire organism is disrupted and dies, unlike complex organisms such as humans and animals. That is why you can destroy the DNA of fungal spores with the correct dosage of UV-C light, without affecting the grass plant and the environment."

Leaf fungi can ruin an entire football pitch within 48 hours. Therefore it is important that preventive action is taken in times when fungi thrive. Van Borkulo: "Playing damage causes a higher vulnerability of the plant and a greater chance of fungi. Especially now that we play European football at the AFAS Stadium on weekdays, our priority is to prevent diseases and use the UVC180."

AZ Alkmaar use the UVC180, a machine developed by SGL, in combination with the SGL grass disease forecast. The grass disease forecast calculates which diseases are likely to develop over the next seven days on the basis of weather forecasts and sensor measurements. Based on this, the correct frequency and intensity of the use of the UVC180 is calculated, so that the machine can be used in the most efficient way.

Van Borkulo states that they could test both the disease forecast and the effectiveness of the UVC180: "We have a training pitch next to the stadium on which we do not use the UVC180. The last time the grass disease forecast indicated that the chance of snowmold was high, we saw fungus develop on the training pitch, but not on the stadium pitch where we use the UVC180. That is a clear confirmation that the system works for us." Dijkhuizen adds: "We treat the stadium pitch preventively with the UVC180 throughout the year and have not once seen any fungi."

AZ Alkmaar received the UVC180 three years ago in the form of a trial, which kept the main pitch completely free of fungi. One month after the test expired, grass diseases developed. Dijkhuizen: "At that time we started spraying fungicides to prevent further spread. Apart from the fact that this did not have the desired result, the use of such resources was also made more difficult by the increasing restrictions imposed by the government. That is why we switched to the best possible alternative as quickly as possible: the UVC180." Since then, AZ no longer use fungicides or other chemical pesticides to combat grass diseases, Dijkhuizen concludes: "With the UVC180 we have everything under control."