by Chris McCullough
in Multi-sports venues, Rugby, and Cricket
on 14 Feb 2018

It's quite unique these days for two opposing rugby clubs to share the same playing fields, but that's exactly what is happening at the Shaw's Bridge Sports Complex in south Belfast. Chris McCullough headed to the Cooke and Instonians clubs to find out how this joint arrangement suits both set-ups. During the nineties, two rugby giants joined forces to play on the thirty-six acres at the Shaw's Bridge grounds following decisions to sell their own grounds and upgrade.

First to make the move in 1991 was Cooke Rugby Club, which is reportedly the oldest junior rugby club in Belfast having been founded in 1910.
Joining them at Shaw's Bridge eight years later was the Instonians Rugby Club which was originally founded in 1919.

Cooke Rugby Club was previously based at Upper Galwally for a long eighty-one years before its move in 1991. Club members may have heard their ancestors fondly remember the old black wooden hut that stood as Cooke's first clubhouse.

Following the move to Shaw's Bridge, Cooke Rugby Club set up a women's rugby section which is the longest standing women's club in Ulster, established in 1992.

Focusing on the Instonians Club, it dates back to formation on 23rd May 1919, emerging as the Old Boys Rugby Club of the Royal Belfast Academical Institution.

Two teams were fielded in that inaugural year and they played in the yellow and black traditional colours of the school, with the addition of purple, which was a permanent memorial to the 132 old boys who had fallen during the war. The club was established on just five acres of leased land, which was a part of the former Malone Golf Club Links at Bladon. When the lease on Bladon expired, fourteen acres of mud, rubble and swamp were purchased in the bend of Blackwater stream on the edge of Belfast. These new grounds and a clubhouse were named Shane Park, where the club remained until 1999.

Due to spiralling costs to maintain a large sports club, Instonians decided to sell Shane Park and move to Shaw's Bridge in a ground sharing arrangement with Cooke RFC.

This agreement, as it still stands today, allowed both clubs to remain independent, with their identities intact, yet allowing the overall costs of running the complex to be shared.

An executive, called the Shaw's Bridge Sports Association, was set up to manage the grounds. Members from both Cooke Rugby Club and Instonians sit on this executive which has a rotating chair each year. Both clubs still testify this initial agreement has proved to be a very successful arrangement within what they claim to be the best multi sports club complex in Ireland. 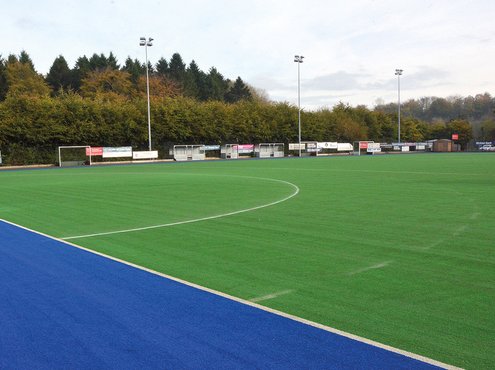 Whilst Cooke Rugby Club focuses on rugby, Instonians, which shifted to open memberships a number of years ago, has three main sporting sections, rugby, cricket and hockey, all which enjoy senior status.

All three sports can be played at Shaw's Bridge simultaneously thanks to an earlier decision to construct a water based international standard hockey pitch at the complex, which is managed by Inst Hockey Ltd.

The Instonians Cricket Club was founded in 1932 for past pupils and members of staff at the Royal Belfast Academical Institution. It continued as a separate organisation until the amalgamation of Instonians Rugby Football, Cricket and Athletic Clubs on 1st April 1962, when the combined sections were known as just Instonians.

Then, on 31st May 1979, the name was changed again to Instonians Rugby Football and Cricket Club, and again on 1st April 1988, the Instonians Men's Hockey Club joined up and the title reverted back to Instonians.

The club, more easily recognised as simply Instonians, sold its Shane Park and moved to the Shaw's Bridge complex in 1999.

As mentioned, the Shaw's Bridge Sports Association is the body that runs the complex and appointed two grounds convenors, one from each club, to help maintain and enhance the playing fields and facilities.

Ian Dickie is the grounds convenor from the Instonians side, and representing the Cooke Rugby Club is Stephen Elliott.

The association also appointed a head groundsman to be its man on the ground each day to carry out all the daily chores required in a complex of this larger size. 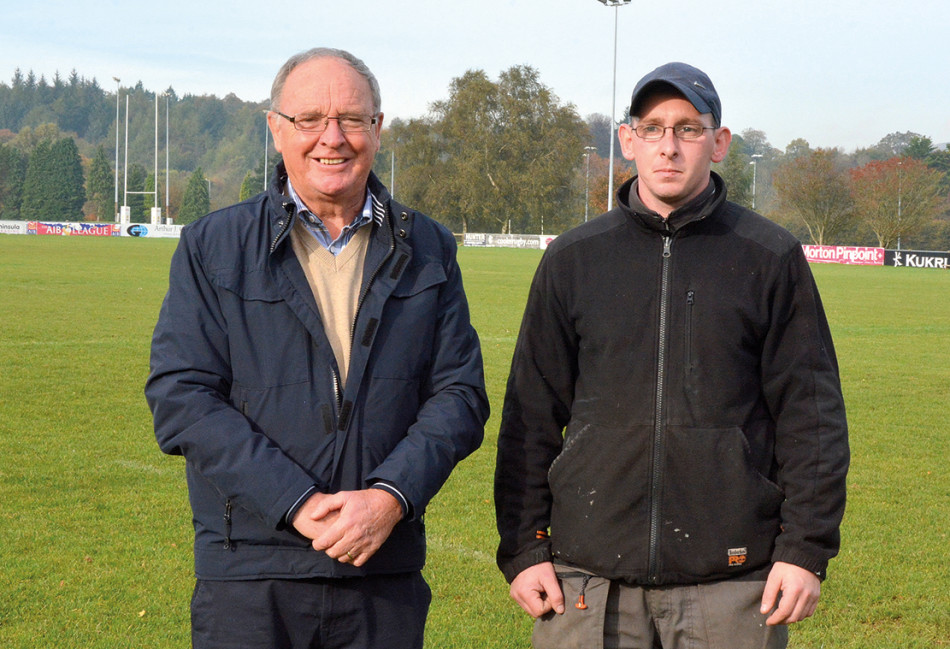 The challenge of looking after such a prestigious sports complex lies in the hands of twenty-seven year old Scott Porter who hails from Belfast.

This is currently Scott's fourth season at Shaw's Bridge. He originally started working at the grounds as an apprentice on a youth training scheme.

When the previous groundsman retired, Scott was lucky enough to be offered the job and that is where he has stayed ever since.

"I'm originally from a farming background and learning to take care of the land comes naturally to me," said Scott. "I have always had a strong interest in looking after sporting grounds and I have a brother involved in greenkeeping too."

Scott completed some basic training courses in groundcare, before taking on the job at Shaw's Bridge, and is now enhancing his knowledge with further training at a local agriculture and horticulture college.

"On top of my previous training, I am now attending Greenmount College in Antrim one day per week studying the NVQ Level 2 on sports turf management," said Scott.

"It's quite a useful course and one that I am enjoying immensely. The practical side of the course is very useful and has already helped me with my job here."

When it comes to the budgets for looking after the grounds, Scott is quite happy to call on grounds convenors Ian and Stephen as this is their responsibility. 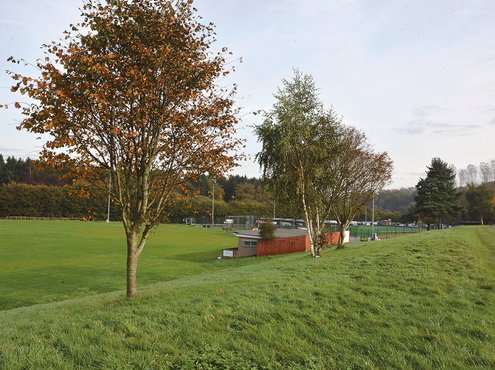 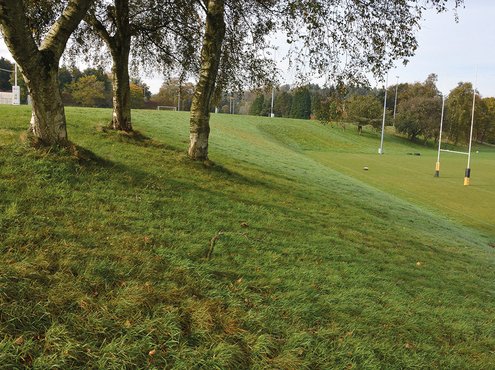 Tackling the budgets via a joint approach is working out well according to Ian. "As with every club, budgets here are tight, but we manage," he said.

"Both I and Stephen sit down and assess what is required on a regular basis and then submit any funding requests to the association."

"Indeed, with thirty-six acres to look after, we do have a huge area to cover and maintain, but we manage as best we can."

"Our grounds are used extensively by both clubs, as well as hired out for soccer, local schools community rugby and Gaelic Football training, so they have to look their best at all times. Presentation is key for us and, together with Scott, we try and have the grounds in tip top order," said Ian.

"It's quite a unique position both clubs are in here with this shared agreement. When Cooke Rugby Club is destined to play Instonians Rugby Club, in the Ulster branch rugby league it is interesting to see which team has to play away and which at home, but thankfully that is all decided by the branch fixtures."

The grounds at Shaw's Bridge are predominantly soil based and Scott finds a regular programme of slitting and cutting helps the soil structures breathe after heavy use.

Located right beside the River Lagan, the grounds also have excellent drainage and are not prone to flooding, even with frequent rainfall.

"The grounds are pretty much sheltered among the trees," Scott said, "and are not prone to flooding at all. Thanks to the tree choice, there are not so many leaves to worry about either, but I still carry out regular leaf brushing, particularly on the artificial hockey pitch."

As well as being beside a river, the complex is adjacent to Lagan Valley Regional Park with plenty of wildlife roaming free, which present their own set of challenges for the groundsman. 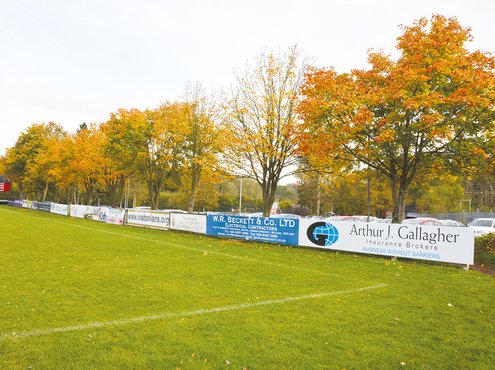 "We do have some issues with rabbits and birds that create some damage. In fact, one corner of the lower rugby pitch had to be excavated away two years ago and refilled and sown out, as there were a number of rabbit warrens underneath and we were afraid it might collapse."

"There are also foxes and badgers in the area. Grey crows are also a nuisance here, but we have a natural pest control agent to hand, our own local buzzard that tends to scare them away," said Scott.

There are three rugby pitches, with one doubling up as a football pitch; two cricket squares, two cricket nets, two artificial cricket mats, one general training area and one water-based artificial hockey pitch.

With the backing of the ground convenors, Scott calls in outside contractors to carry out verti-draining and other specialist tasks such as sanding and seeding.

They also use a consultant, Phil McCormick, who not only advises but carries out all the fertiliser applications and any spraying that is required.

Scott cuts the grass on the rugby pitches twice per week in the summer time and once per week from September onwards at a height between 50mm and 75mm.

"This is followed up by a regular programme of cutting and slitting the pitches every two weeks with the Sisis MegaSlit," said Scott.

"At the end of the season, I cut the pitches low and chain harrow them all to remove any thatch. It is at this time that we carry out any sanding and seeding if required," he said. 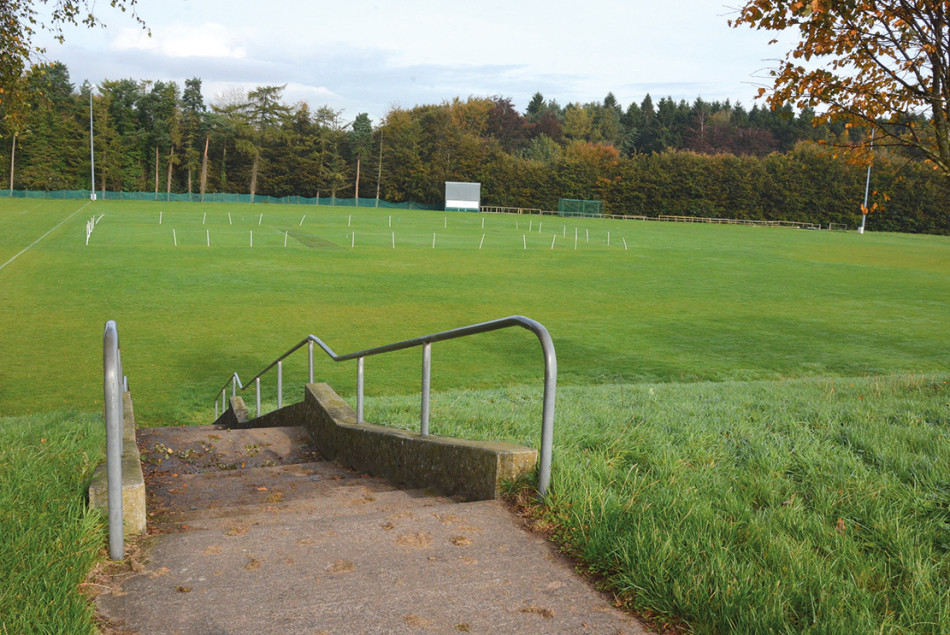 When it comes to the cricket pitches, Scott maintains the cricket square, which is graded top one by the Northern Cricket Union, at 10 to 12mm and the wickets down to 4mm.

Within the Instonians stable there are six cricket teams, youth and ladies cricket, three senior rugby teams as well as youth and mini rugby teams, which play on a Saturday morning.

When the seasons are in full swing, and with such heavy traffic on the playing fields, they take a lot of battering and become compacted, hence why Scott favours the MegaSlit machine.

"The pitches do tend to get a lot of use, but that's what they are there for," said Scott. "It's up to me to try and manage them, which can be quite difficult at times when the main pitches are used for training on, instead of the designated training areas."

"Plus, the weather in August this year was atrocious and I was unable to cut the grass for three to four weeks which meant it was even more difficult to knock the pitches in shape when the dry weather finally came," he said.

Although Scott works mostly on his own, he can avail of some help when the pressure is on. "I have to say Ian is very good at coming down to help out," said Scott. "He is an expert on the pedestrian mower, which really does save me a lot of time, especially in the busy spells."

"Plus, some team members come down to help me mark the pitches. People do not realise how long it takes to mark out one pitch, so it is another huge help when I get some assistance with this task."

One of the more challenging tasks at the Shaw's Bridge Sports Complex is managing the banks and getting the grass cut.

Scott said: "As the pitches are at split levels, there is a bank that forms a border between them. Some parts of these banks are at quite a gradient, too steep to cut with the tractor, so we hire in a special mower to cut the grass there."

Scott says the groundsman industry is heavily under recognised, and more needs to be done to highlight the good work they do.

"It seems the ordinary groundsman is very much forgotten about, yet relied on to keep sports grounds looking at their best."

"I think more needs to be done to highlight the importance of our roles to the general public, sportsmen and women and the people who run the clubs," he said.

Scott did conclude by saying that the Shaw's Bridge Sports Association was very supportive of his work and helped out with his course at Greenmount College.