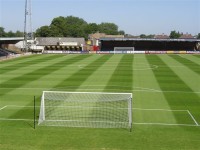 This year's FA Groundsman of the Year has paid tribute to the Barenbrug BAR 50 SOS grass seed that helped him repair his club's pitch after the appalling winter, just in time for the competition's judging to take place.

However, Ian says returning the pitch to an award-winning standard after the harsh winter was no mean feat. In fact, he says it wouldn't have been possible without the expert advice of his local turfcare supplier Collier Turf Care and area representative Stewart Jeff's recommendation he use Barenbrug's BAR 50 SOS.

"This is my 31st season at Cambridge United and I can honestly say that this winter was the worst I've experienced since the 80s," Ian reveals. "The pitch took such a hammering - we lost three games to the bad weather, but otherwise the club and Cambridge Regional College were playing here every Saturday, sometimes twice a week. I must have lost at least 20 percent of my grass cover clearing snow, which resulted in a real loss in stability."

With Ian a regular BAR 7 customer, a routine Collier Turf Care visit from Stewart resulted in the recommendation he try BAR 50 SOS - Barenbrug's renowned cool soil temperature germination rapid repair mixture. "I looked into the low germination temperatures and thought it sounded too good to be true!" Ian continues. "But I decided to give it a go and was amazed by the results."

Harnessing a unique annual ryegrass bred by Barenbrug Research for its cool soil germination, and quick and superior establishment, BAR 50 SOS provided just the cover and stability Ian needed to get the pitch back to full match fitness - and wow the judges. "I overseeded in February and so it was back to looking its best in April when the judging took place. It without doubt gave us the grass cover and stability back - without that fresh injection of quality seed able to germinate in such low temperatures I don't think I'd have won the award."