One noticeable development in groundcare machinery has been the emergence of a wide range of battery powered professional tools, so we invited five leading manufacturers to supply machines for testing in the diverse environment of Shrewsbury School's grounds, by kind permission of Grounds Manager Andy Richards and with the help of his team. 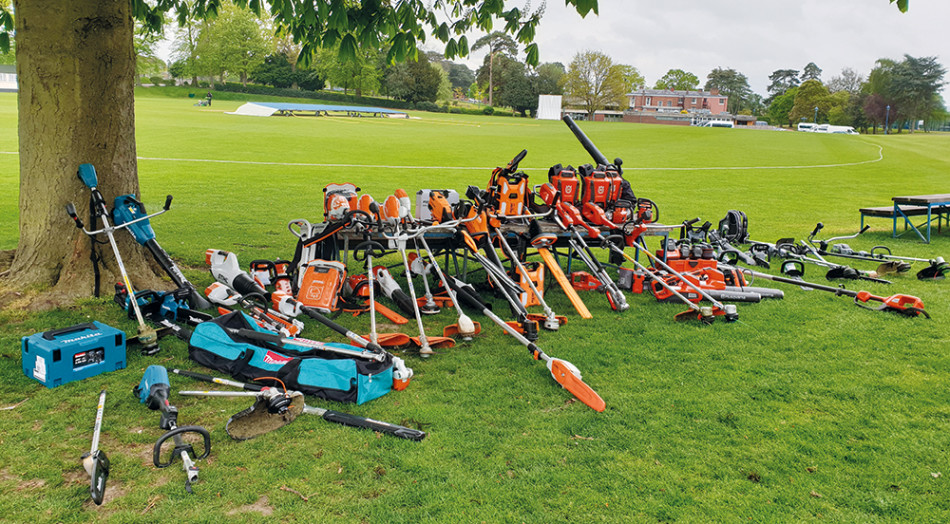 Historically, there has been a perception that battery powered grounds maintenance machinery is more suited to domestic than professional use, but many of the machines in our test were based on their professional petrol equivalents, and testers found them to be robust and durable. We used them in highly inclement conditions to trial water resistance and even took them for a ride in the back of the UTV as part of the process, which is a good test of any machine's strength!

When purchasing, manufacturers' advice is to look for machines specified as professional or commercial series as these are designed to meet the same durability standards as their petrol equivalents, and also have suitable batteries to offer the run times needed for commercial work.

Battery powered equipment could offer particular benefits for sensitive environments such as schools, hospitals and hotels, due to the quiet running of electric motors.

For example, Andy Richards explains: "It's quite difficult to schedule work close to school buildings at certain times of year, as noise has to be avoided at any time that an exam is in progress, which can wipe out entire days. We can't always start early either, as work is prohibited next to the dormitory blocks before 8am, so quiet running is certainly an advantage for us." 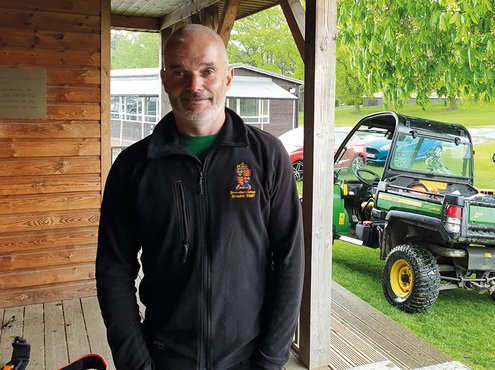 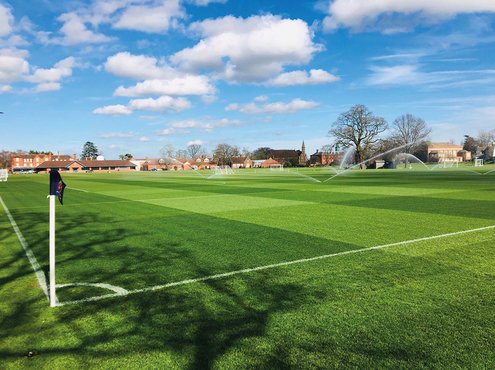 Husqvarna suggests that battery powered implements offer a distinct benefit even with traditionally noisy activities such as using a brushcutter or blower - with noise levels of up to 18db(A) lower than their petrol equivalents.

Battery performance is a topic of interest - whilst many operators need to be able to work for several hours away from base so need long life batteries or multiple battery packs, Andy points out: "Our operators will only perform one task for a couple of hours at a time, so batteries can easily be swapped in the workshop at the changeover, but need to charge up quickly."

"There is no tail-off in power and a flat battery will simply cut out rather than fade. They have a long lifespan and withstand multiple charges, yet if a battery is left to run down, over the winter for example, it will always retain 20% residual charge so the implement could still be used."

Pellenc points out that its in-house designed and built batteries use high-capacity lithium-ion cells tested in severe working conditions which can withstand over 1,300 charge cycles and give a service life longer than five years (one cycle corresponding to one full charge and one full discharge).

Design and technology can help get the best out of battery life. All battery powered machines have a feature such as LED lights to check the remaining run time and help plan charging periods.

Husqvarna also offers the Connect App which provides battery management tools including runtime statistics and charge status for its Bluetooth-connected machines. Its battery handheld products also come with a savE feature, an economy mode which can be selected to maximise operational time. 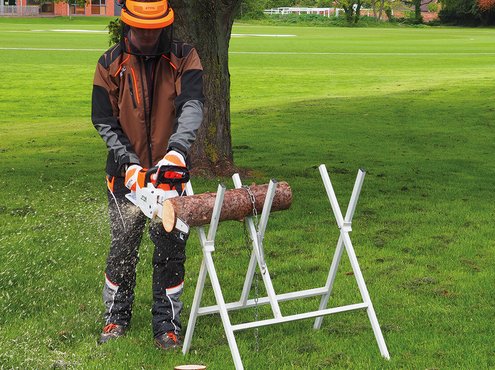 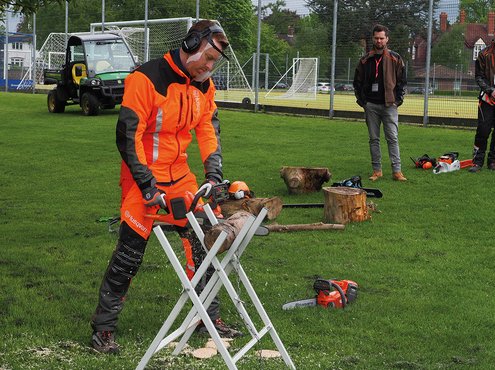 Brushless motors feature on many electric tools, designed to give high consistent torque from low revs, also saving power. With no petrol engine to fire up, starting and operation can be as simple as the click of a button.

Each manufacturer offers a range of batteries which are interchangeable between tools, so in theory one battery pack could power all the implements that an operator would use. However, choice of battery depends on the run time required and preferred overall weight - and be recommended by the manufacturer for a particular implement - rather than an integrated battery, so it's worth considering which tools will be used now and in the future when purchasing batteries.

Even backpack batteries are relatively light, and the well-padded, adjustable harnesses were picked out for praise in the test.

STIHL also demonstrated a hip belt which can be used for smaller batteries, with a cable running to the tool, and also offers a backpack to carry two smaller batteries - it's probably a matter of trialling all the options and then making a decision!

All manufacturers offer chargers for their batteries, with various options depending on whether rapid charging is required. Consideration should be given to where batteries will be charged, and how to cater for multiple batteries if used, without taking up too much space or having potentially dangerous trailing leads in the workshop. 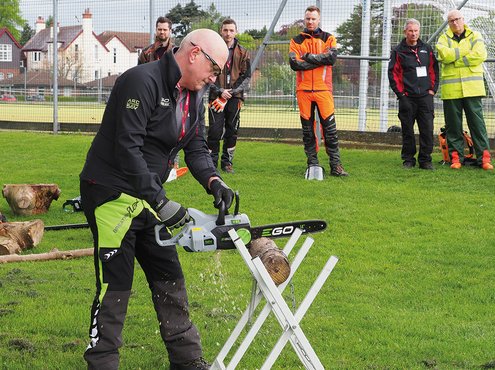 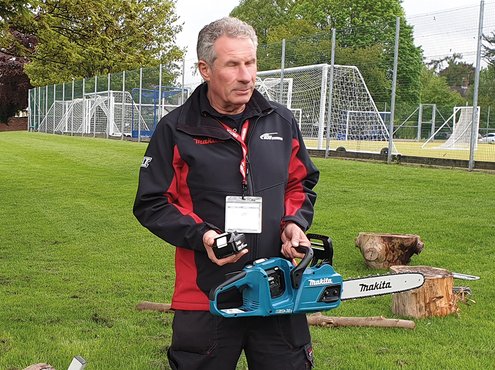 Pellenc offers a smart Battery Park Management (BMS) system, which will allow users to charge up to ten batteries simultaneously.

Les Malin, Managing Director of Pellenc's UK and Ireland distributor Etesia UK explains: "The BMS centralises battery management of all Pellenc batteries allowing a maximum of ten chargers, two of which can be rapid chargers, to be housed in one secure and safe metal cabinet with only one mains plug required."

On the front of the cabinet is a touch pad that allows the operator to individually control all of the batteries' charging input and enter petrol and electricity cost data. Standard pre-programmed or maintenance charges can be selected, and the system will calculate the savings made, both in fuel and electricity, whilst also showing the amount of C02 that has been offset - potentially useful information for local authorities and their contractors.

As the school's certificated operator was not available on the day of our test, manufacturers either demonstrated their saws or discussed them with the groundsmen.

Power and performance of the Makita, STIHL, Ego and Husqvarna models shown impressed our team - Husqvarna's 535iXP model operates at 20m/sec, comparable to a similar petrol model. The groundsmen also commented on the light weight and balanced handling of the saws.

Pellenc's Selion powered pruner also drew a lot of interest - originally designed for specialist pruning in orchards, it offers a powerful alternative to a lopper, but does not require a chainsaw certificate. Pellenc's range includes a top handled chainsaw, but as this design is aimed at professional arborists for tree climbing work rather than groundsmen, it was not presented on the day.

Andy envisaged one drawback of the compact, benign appearance of the electric chainsaw. "Petrol chainsaws look quite daunting so an unqualified operator is unlikely to pick one up and 'have a go' - these look a lot more 'friendly' so you'd need to secure them in the workshop or out on site so that staff or even a member of the public didn't get tempted." 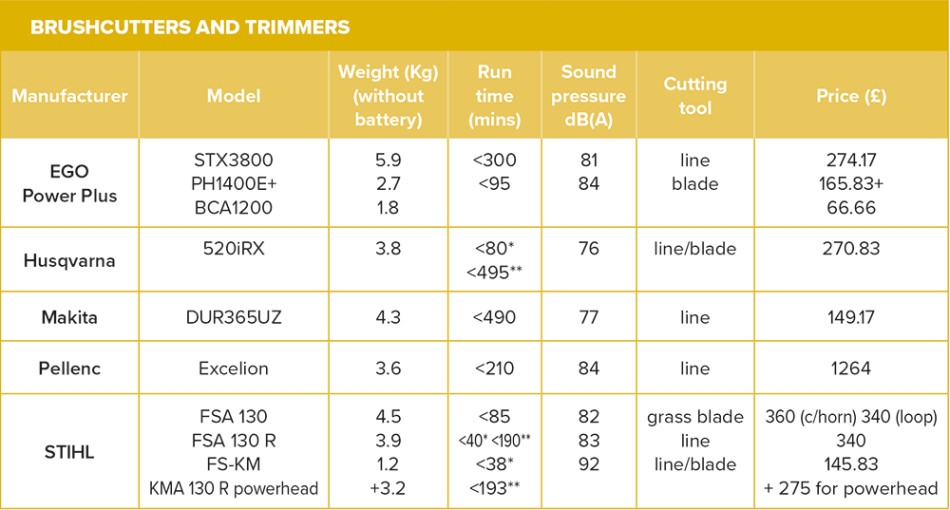 Makita's split shaft DUX60Z and DUR 365UZ twin 18v brush cutters were praised for their simple design and light weight; both have an integrated battery so are easy to put on and wear. The two different handle systems - loop and cowhorn - appealed to different operators, and handling was slightly different as the twin 18v has the motor in the base. Two-button control was said to be easy to use, and the powerful operation was also singled out.

Good balance and ease of use were also picked out as features of the EGO STX 3800 and BC3800 brushcutter, the former with loop handle and the latter with cowhorn and both with backpack battery. One operator chose these as his overall favourite for its power, and the light weight was universally praised. 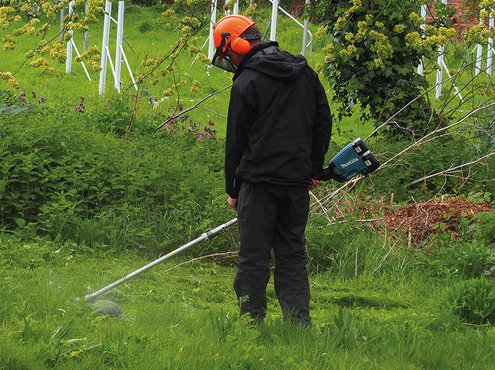 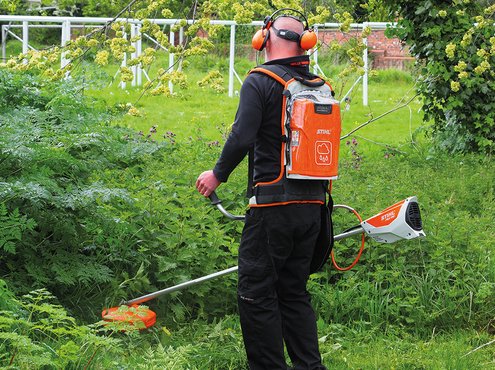 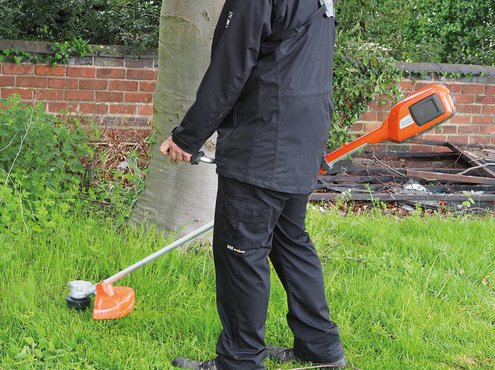 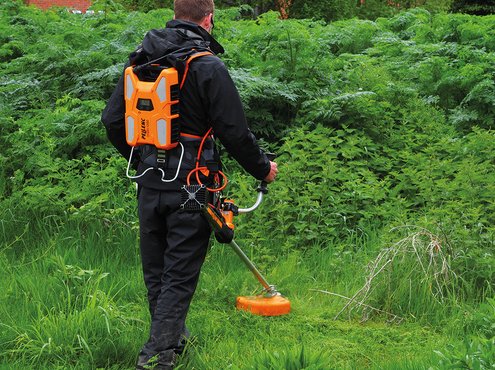 The complexity of the STIHL models when using them for small jobs was mentioned, but the well designed, comfortable harness made up for the extra weight. Some operators found that the blade got caught up in heavier material.

Powerful operation was one of the outstanding features of the Pellenc Excelion, although the 'double click' on-off was considered to be difficult for some operators. The large battery pack was supported by a generous harness and was generally considered to be very comfortable.

Husqvarna's 520iRX was universally liked especially for its light weight. Operators remarked on the easy reverse feature which can be engaged to cut in both directions with a trimmer head, meaning cuttings can be sent in either direction - making for tidier more efficient work. 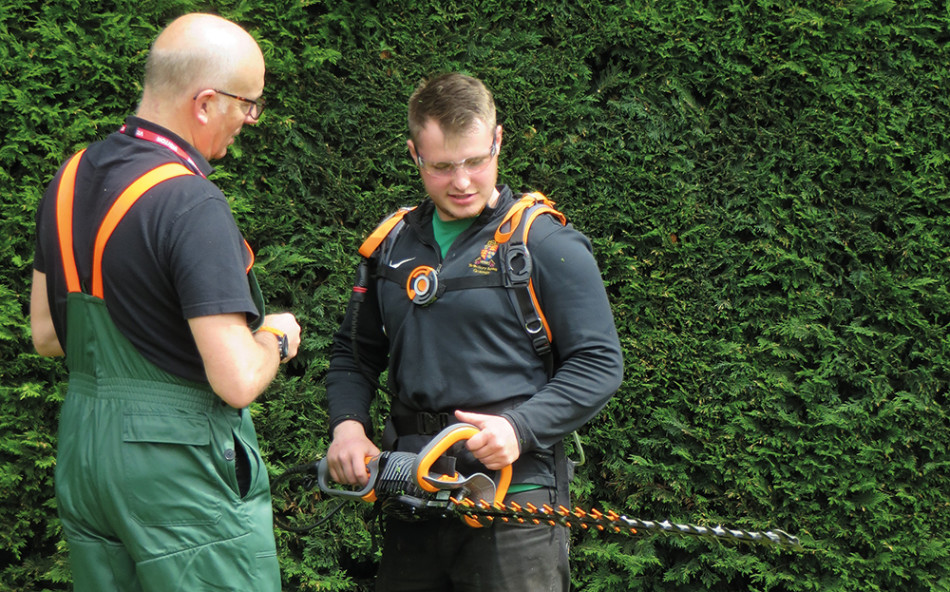 The quality and finish of the Husqvarna 520iHD70 and 520iHE3 long reach were picked out, along with their balance, although they were felt to be quite heavy. The battery performance was considered to be another plus.

Makita's split shaft multi-tool was also trialled with its hedgecutter attachment, along with the DUH601Z hedgetrimmer and again the simplicity of use and comfort was praised. The position of the split shaft was a comfort issue for one operator.

EGO showed its multi-tool plus HTX6500 and HT500 hedgetrimmers, the multi tool getting particular praise for its good balance as a long reach machine. 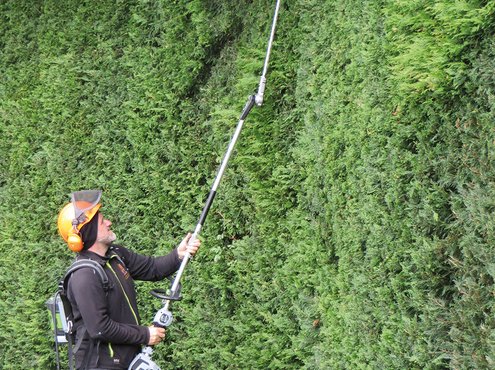 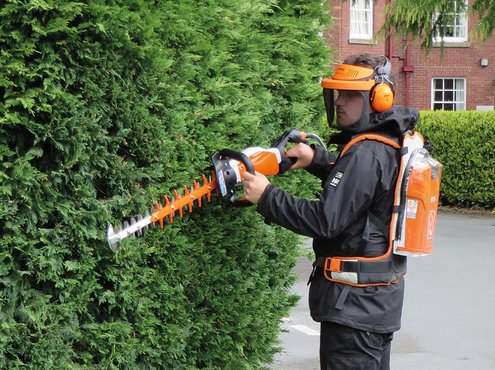 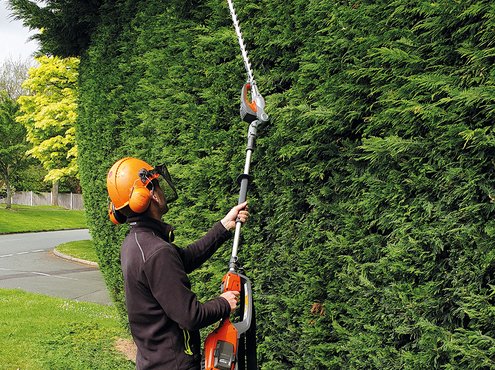 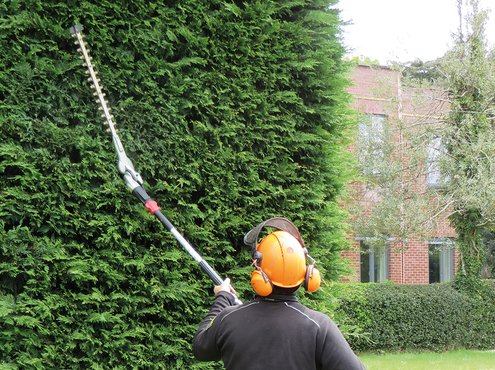 Whilst felt to be heavy, the build quality of the Pellenc Helion HEL 20 and Alpha HEL 20 long reach machines was praised, with testers suggesting that they would stand the test of time in a commercial environment. The well-made, comfortable harness made carrying the battery easy.

STIHL offered the widest choice of machines for the test, with the HSA 86, HSA 94 R, HLA 65, HLA 85 and multitool KMA 130 R all available to try. The simple twist grip operation and light weight were picked out as their best features. 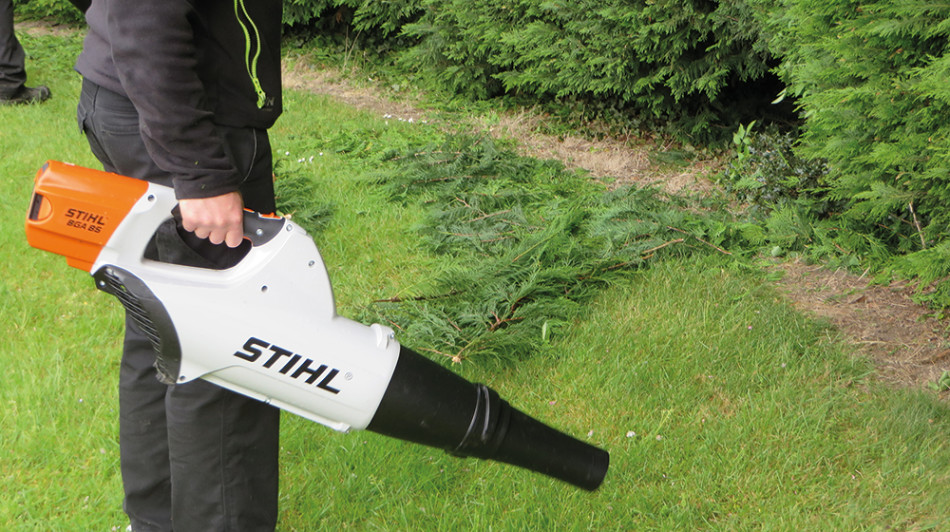 Of all the tools tested, the low noise levels were perhaps the most noticeable with the blowers, operators commenting on how much easier it would be to get the job done in sensitive areas.

Makita's DUB 362Z is a simple hand-held blower with integrated battery, considered to be light but with plenty of power and easy to handle.

STIHL's offering included the BGA 100, BGA 55 and the useful multi-tool KMA 130 R. A trigger switch for that power boost when blowing wet leaves or heavier debris was appreciated. 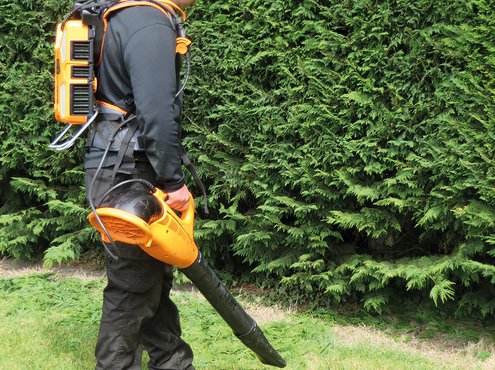 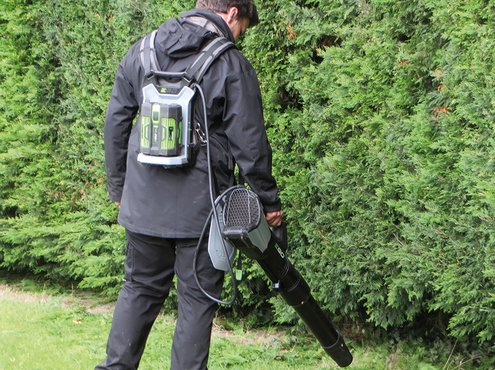 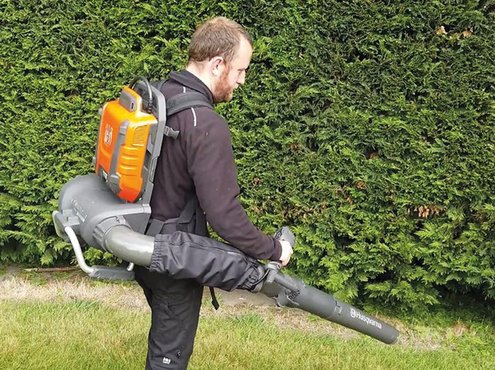 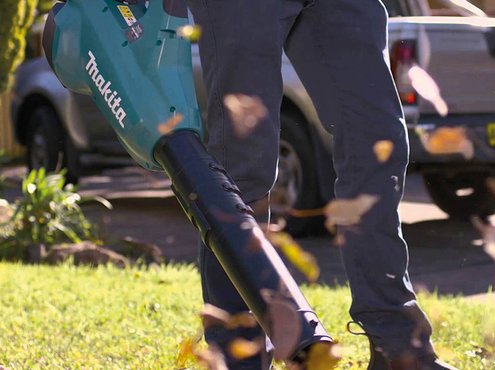 Husqvarna's 530iBX, 550iBX and back pack were considered to be good all round, easy to handle and control.

Design and appearance were picked out as good points of the EGO LB6000X and LB6000, along with their high power.

Power and performance were also praised on the Pellenc Airion.

Cost is a moot point - whilst the implements themselves are competitive with their petrol equivalents, the battery adds another chunk to the price.

If the battery and charger's cost can be spread between three or four implements it starts to stack up, especially when the savings on fuel and servicing are taken into account. EGO has produced a convincing calculation for a professional landscaper purchasing a hedge trimmer, line trimmer and blower which shows that even considering battery and charger purchase costs, savings of £4442 could be made over a five-year period compared with the equivalent petrol trio.

Another approach could be to use a multi-tool, where one shaft (and thus one battery pack) powers a range of working tools, from hedge trimmers to cultivators and even a blower in STIHL's case.

However, batteries are not interchangeable between brands, so that calculation does require brand loyalty for all of the electric kit being purchased.

On the plus side, a purchaser choosing three or four machines at once should be able to secure a favourable price at the dealership!

In the summer, one of Andy's major challenges is the packed cricket programme; there are fifty-five grass pitches which means up to thirty can be in preparation at any one time. Andy uses a diverse range of maintenance equipment, especially hand tools and multiple machines can be in use at once, preparing for a major fixture or school event such as Speech Day. He also has one battery powered implement in his fleet already, so has some experience with these tools.

The school has around 1200 trees and large ornamental and lawned areas which are all maintained by Andy's team of ten groundsmen and gardeners.