0 Bees’ Honey of a pitch

When Brentford FC won the play-off for a place in the Premier League in May it put them back in the top flight of English football where they hadn't been since the 1946/7 season. Neville Johnson went to the club's impressive new stadium to see how its Head Groundsman Steve Honey was set for the challenges ahead 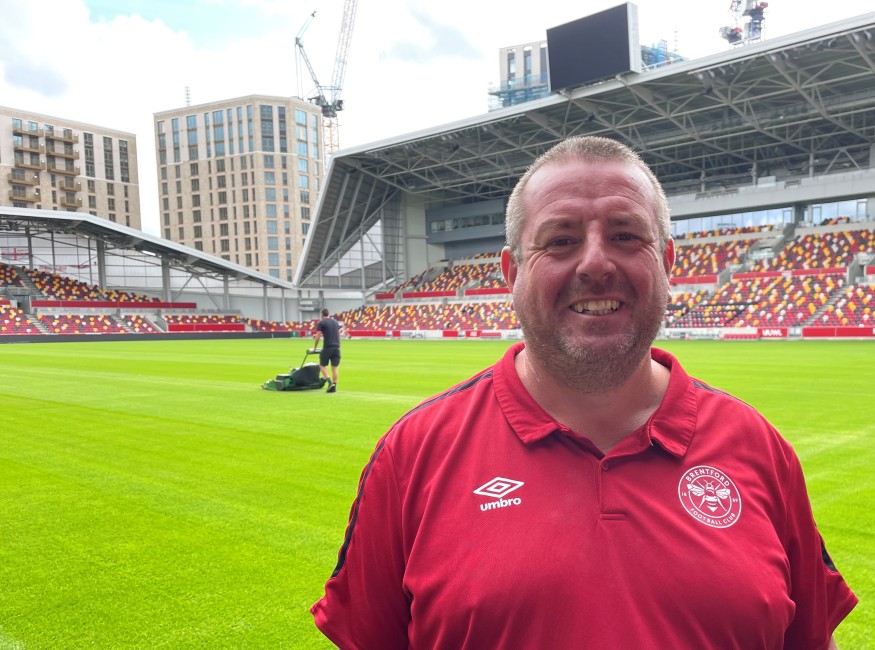 It may be an all too obvious a pun, but there was a real pre-season buzz at the Premier League's newest venue as everyone at one of London's oldest clubs anticipated the 2021/22 season. Curiously, the nickname Bees, beloved by its fans and known across football, doesn't actually stem from the arch pollinator. Back in the 1890s, not long after the club was formed in 1889, students watching a Brentford FC match chanted 'buck up Bs' which was misreported in local newspapers as 'buck up Bees'. It stuck, and has been the club's badge and affectionate ID ever since.

Steve Honey came to Brentford four years ago as head groundsman at Griffin Park, the club's home since 1904, after several years looking after a number of non-league grounds. He describes himself as a failed sportsman who's made a career out of the next best thing and being close to the action without having to play. He swears he didn't get the job because of his name.

Brentford Community Stadium, which cost £71m to construct, is one of the most significant and exciting developments in the history of Brentford Football Club. Owner Matthew Benham, himself a lifelong Brentford fan, describes it as the cornerstone of a long-term vision and will help ensure a sustainable future for the club.

Situated next to Kew Bridge station and in the middle of a triangle of railway lines less than a mile away from Griffin Park, the whole 31,000 square metre site is also central to a regeneration plan for the area, which includes more than 900 new homes, a new purpose-built location for Brentford FC Community Sports Trust, and a public square with shops and cafes. Development of the broader plan is ongoing with cranes breaking the skyline surrounding the new stadium.

There had been talk of a relocation for Brentford Football Club for the best part of twenty years and this gathered momentum when Brentford bought the site from Barrett Homes back in 2008 and stated its aim to build a much larger capacity stadium by the 2016/17 season. After approvals for the construction of the new stadium from Hounslow Council, The Mayor of London, and the Government, it was getting a Compulsory Purchase Order for the remainder of the site that slowed things until September 2016. This was just after London Irish announced that they were actively pursuing a move away from its rented home at Reading's Madejski Stadium to be back in London at Brentford's proposed new stadium. Agreement between the two clubs was reached and the stadium usage application amended and approved. Site clearance work began in March 2017 and construction of the stadium got under way twelve months later. 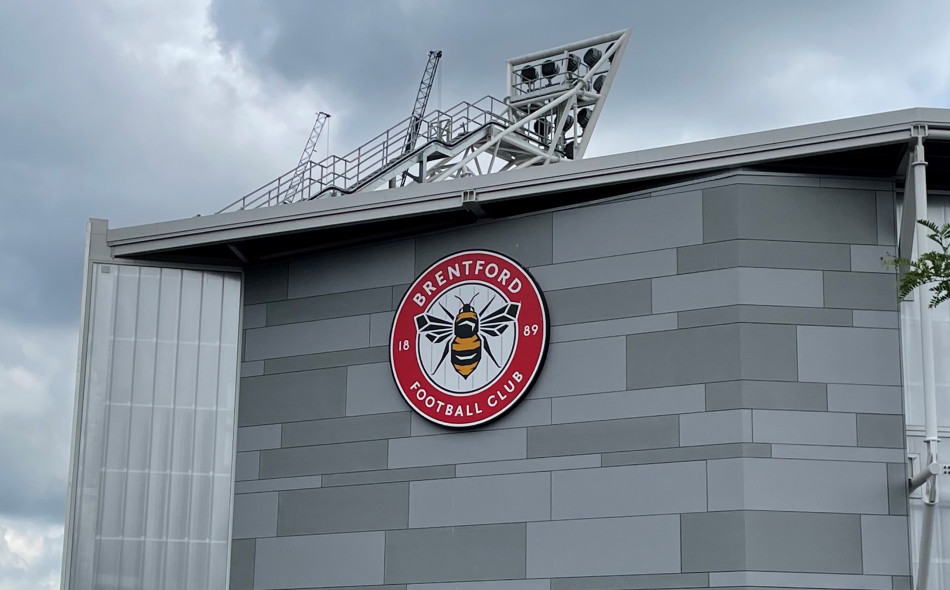 Flying high - the Bees on the west London skyline

On 30th August 2020, the club announced that the Brentford Community Stadium was 'open for business' and ready to host football and rugby.

The first football match at the stadium took place on 1st September 2020 when Brentford hosted Oxford United in a pre-season friendly. The first competitive match was just five days later when Brentford took on Wycombe Wanderers in the first round of the EFL Cup. London Irish played their inaugural match at the stadium on 29th November 2020 when Leicester Tigers were their Premiership opponents.

Only Covid marred the total joy of this watershed in Bees history. At the time Brentford Chairman Cliff Crown said: "It is a real shame that our fans cannot get inside yet, but that day is coming soon, and we are all looking forward to it."

Steve Honey admits he does miss Griffin Park, just like all the fans, but this is an exciting new way ahead for the club and he is relishing it. His set-up is entirely self-sufficient and all the equipment at his disposal is owned by the club. The club's Operations Director Alan Walsh is his boss for all pitch matters - football and rugby.

Steve's remit is straightforward - to look after not only the Community Stadium pitch, but Brentford's training ground at Osterley. for which demands have risen significantly now the club is in the Premier League. The introduction of hybrid surfaces and the need for a much higher degree of hand cutting is now a must there to give players a consistent feel of Premier League conditions. He has a seven strong team of full-time groundsmen at the moment and the plan is to increase this to nine for the coming season to cover work at both sites. 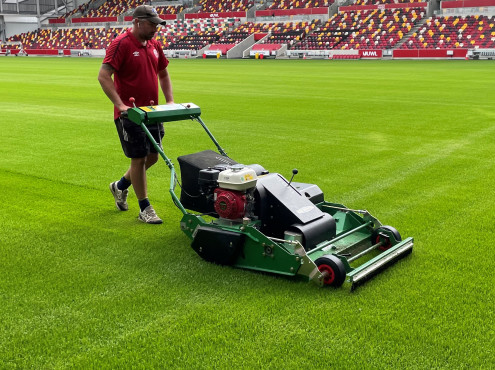 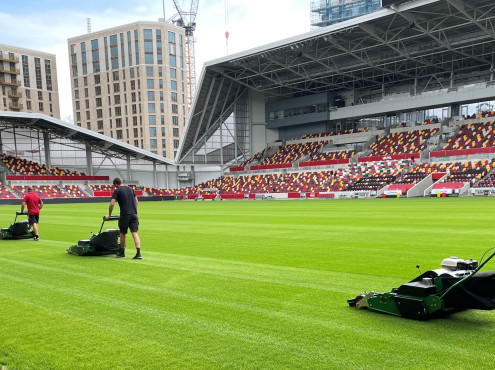 The stadium pitch is a Desso Grassmaster, the same as the one at Wembley. It was laid by Hewitt Sports Turf and completed its first full season this May for Brentford's successful Championship campaign and London Irish's home fixtures in the Rugby Premiership.

Steve had had experience of hybrid surface management at Griffin Park where a County Turf's Eclipse pitch had done excellent service for a number of years. The decision to install a Desso was as much as anything governed by the 'double whammy' of Premier League football and Premiership rugby with over thirty matches between August and next May scheduled.

Brentford and its tenant London Irish playing at the stadium would bring huge demands for pitch excellence week in week out. Steve and his team first started working on the new Desso surface, keeping it in trim, before the club moved into the stadium.

"Building site mud and the first period of Covid restrictions made life interesting," he recalls. "We had to do our watering by hand because computerised irrigation had yet to be installed. As for groundsmen with hard hats? I mean, it didn't seem right," he joked.

No football had then been played on it, but Hewitt's returned to do a mini refurbishment last summer ahead of the 2020/21 season.

As we look at the pitch in July this year, a full refurbishment and reseeding of the new surface after a full season of football and rugby action is just five weeks old and it is getting a routine daily trim to 30mm courtesy of a quartet of Dennis Pro34 rotaries.

"Hewitt's were on site for less than four days," said Steve. "From Koroing to reseeding, everything went smoothly and the result is a pitch raring to go again at football's - and rugby's - top table."

Sad as it was for all concerned to leave their home of nigh on 120 years, the move to the Community Stadium last August saw a swift turnover from disappointment to triumph for Brentford. The final season at Griffin Park had culminated in agonising play-off defeat at Wembley by, of all clubs, their West London neighbours Fulham. Twelve months later, Manager Thomas Frank's team defeated Swansea at Wembley 2-0 to clinch a place in tier one of English football, a place where the Bees hadn't been for seventy-four years. 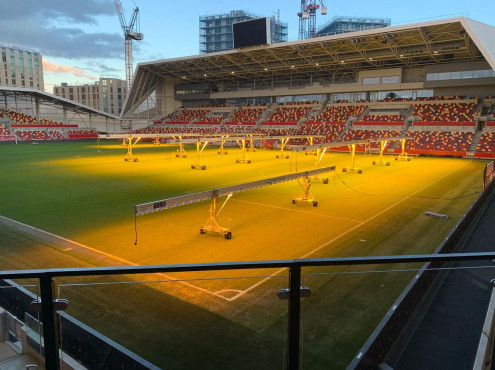 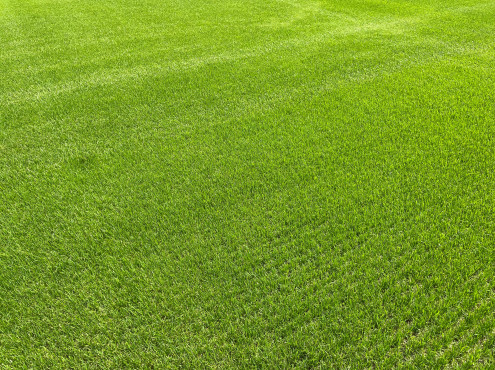 Parked up in the car park was a set of TLS 72 lighting rigs, just another reminder that Brentford FC is upwardly mobile.

"We did have smaller rigs at Griffin Park, but these larger, more flexible units make a world of difference to growing conditions at the new stadium," said Steve.

Steve regularly turns to PSD Agronomy's Dale Frith for advice and expects to be doing lots of 'tweaking' when it comes to the effects of shading, airflow and associated micro-climate issues as conditions change.

For irrigation, the stadium has eight in-pitch heads and sixteen pop-ups around the perimeter, all remotely controlled. "A far cry from our days of hosepipes, occasional soakings and tinkering with screwdrivers," quipped Steve.

The pitch itself is 105 x 68 metres, in line with most other Premier League venues. For rugby, the try line runs along the football 'six yard' box line. A BeamRider laser marker takes care of the weekly switching from football to rugby and back again, white efficiently turning to green as necessary.

Steve and his team were geared up for a big change in the timing of match day preparation to fit in with the big say Sky and BT have in fixture schedules. Everyone at the club was excited when the Premier League fixtures were announced and the Bees first game was at home to Arsenal, and it was the opening game of the season on a Friday evening in front of Sky cameras. This, Steve admitted, gave him an added tingle, because he is a lifelong Gunners fan. He would, a hundred percent, be more concerned about producing a top-notch pitch than the result, he said convincingly. 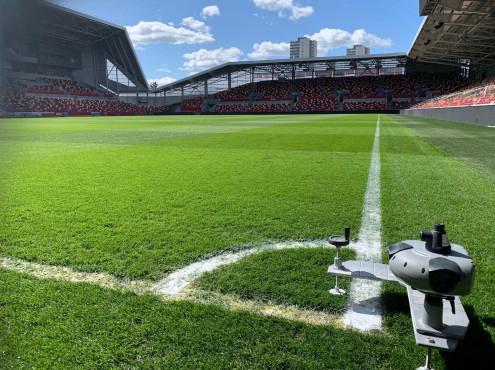 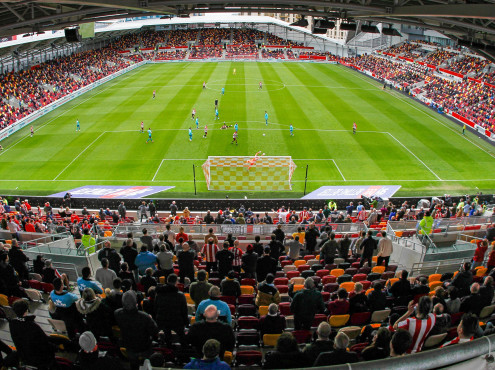 The Premiership rugby season kicks off a month after Premier League football, in September. Currently, Brentford is the only Premier League club where rugby is also played. Steve and his team will be preparing over thirty top flight football and rugby pitches in the coming season, not to mention any cup fixtures that come their way.

"The stadium already has one season of hosting both sports under its belt and it went well," said Steve.

"Normally, London Irish play a day or so after the Bees and, often as not, last season's respective games were on Saturday and then Sunday. People often wrongly believe that rugby players cause more disruption to a pitch than footballers. It is quite untrue. Surface disruption is actually about the same."

Steve was clearly relishing being under the spotlight. "It's what gets you up in the morning," he said.

"Nothing has really changed for any of us in terms of doing the best we can with the resources at hand. We are the same bunch of decent professionals that did our level best at Griffin Park, but we're now Premier League groundsmen and the stakes are higher, as is the satisfaction."

Brentford's best ever season at the top level was way back in the 1935/36 season when the Griffin Park faithful saw them secure 5th place in the then Football League Division One. There was excitement and optimism in equal measures ahead of this new venture for the Bees. They are obviously aiming to be in it for the long haul. Quite a thought as, if they won their first match, they'd be top of the Premier League! 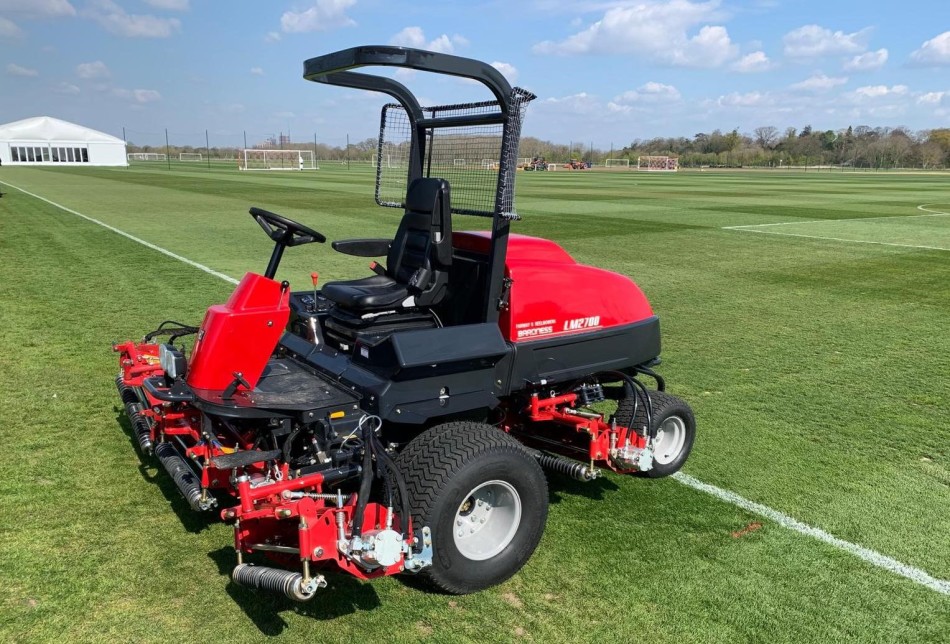 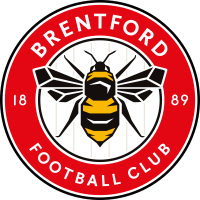