Bridgwater College (Cannington Centre) recently staged a grinding workshop for their Higher education Sports Turf students in association with Bernhard and Co. Grinders. The day was organised as an opportunity for students to observe first hand the applied benefits of zero contact grinding and how significant these are in terms of efficiency, quality of cut and effectiveness of the unit.

The day was organised by Programme Manager Will Bowden, with great support from Bernhard and Co. staff Ben Taylor and Steve Nixon who led the day.

The workshop bought up some very interesting results and with the help of Ben Taylor these are explained:

Four identical John Deere 260B mowers set at 12mm height of cut were set in different cylinder to bottom blade conditions. These were:

A - Mower set with no contact (approximately 2 thousands of an inch clearance) between cylinder and bottom blade. Neither cylinder nor bottom blade had not been ground for approximately 30 days. Mower was still set up to cut paper as best as possible.

B - Mower set with light contact between cylinder and bottom blade. Cylinder was still easily turned over by hand. Neither cylinder nor bottom blade had been ground for approximately 30 days. Mower was set up to cut paper as best as possible

C - Mower set with light contact between cylinder and bottom blade. Cylinder was easily turned over by hand. Bottom blade had been ground with a top face angle of -6 degrees and a front face angle of -5 degrees. The cylinder had been spun ground on an Express Dual 4000. Mower was set to cut paper as best as possible.

D - Mower set with no contact (approximately 2 thousands of an inch clearance) between cylinder and bottom blade. Bottom blade had been ground with a top face angle of -6 degrees and a front face angle of -5 degrees. The cylinder had been spun ground on an Express Dual 4000.
Mower was set to cut paper as best as possible.

The mowers were all fuelled to the bottom of the filler neck on the fuel tank to the same mark.

The mowers were all used at high idle throttle (3200 RPM)

The mowers all cut an area of grass (Species composition: Lolium perenne, Festuca rubra, Poa annua) on the practice range at Cannington. The areas were identical in size (10m x 10m).

The table below shows the results achieved from each mower. Areas that were recorded were:

1st Cut Weight - The amount of grass collected in the grass box was weighed to give a result of how much grass had been cut off from the area mown. It should be noted that there is an error factor of approx 5% to account for any grass which was not collected from the area or spilt from the box.

Fuel Used - The amount of fuel used by the mowers during the cut. This was measured by measuring how much fuel was required to fill the tank back up to the original starting level. This has an error factor of 10% due to differences in transportation route or engine cut off time.

Visual Appearance - The whole group voted on the visual appearance of the after cut appearance. An average was taken from the votes. Marks were won or lost depending on definition of striping, amount of grass uncut, length of grass cut, consistency of cut and quality of cut grass blades. The ratings were as follows:

Clipping Quality - A handful of clippings from each weighed box of clipping were taken and viewed under a macro scope. This was at 25x magnification. Again, the whole group voted on quality of the cut to the clippings on a scale of 1 to 5. An average of the results was taken. Marks were won for cleanliness of cut, consistency of cut and lack of damage to grass tips. The same ratings were used as for the visual appearance test.

After this first test had been carried out, the mowers were all taken back to the workshop and re-set. The two mowers which had previously been ground were set to a no-contact cut with a 2 thousands of an inch clearance and set to cut paper as best as possible. The height was also re-set to 12mm.

The two mowers which were not previously ground were reground. The bottom blades were ground with a top face angle of -6 degrees and a front face angle of -5 degrees. Both were spun ground on an Express Dual 4000 and both had the heights set to 12mm.

This means we had four identical mowers, set with the identical cut. The mowers then went out and cut the SAME area as they had done previously. The results were then recorded as before. 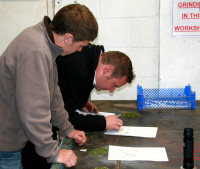 As anticipated the results showed a clear correlation between zero contact and a well set cutting unit, and the quality, frequency and efficiency of cut. What was most startling was the variation in fuel efficiency between the different mowers and settings. *The first set of results showed a significant difference between mower B (no contact dull cut) using 90ml of fuel and Mower D (No contact reground cylinder and bottom blade) using 40ml of fuel.

This result was far greater than anticipated by either staff or students, with the dull cutting unit using in excess of double the volume of fuel, for the mowing of an area 10m/sq.

Overall the results from the second round of tests evened out as expected after the mowers were ground, although it was surprising that Mower B (originally set as contact and dull cut) took off the largest percentage of clippings 2.51kgs.