0 Beware of death by flower! 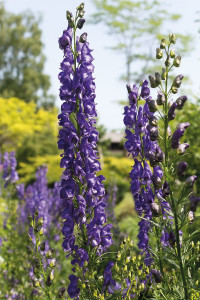 Monkshood, Aconitum napellus L., also known as Wolfsbane, is an attractive plant that is commonly grown by gardeners throughout Britain. It attracted public attention at the end of last year when a 33 year old gardener died from multiple organ failure after handling Monkshood.

This isn't the only death attributed to Monkshood; Victorian medical books give lurid details of the symptoms and deaths of gardeners who have inadvertently eaten Aconitum tubers, having confused them with Jerusalem Artichokes.

Monkshood is highly poisonous owing to the presence of the powerful and deadly alkaloid aconitin and of other associated alkaloids. A. napellus L. has long been used as a narcotic and analgesic. Its generic name Aconitum may come from the same root as our poisonous umbellifer Hemlock Conium - which killed Socrates (469-399 B.C.).

Aconitum first appeared in lists of English plants from the 10th century onwards under the Anglo-Saxon name of Thung. Thung or þung can refer to any of several poisonous plants (or vegetable poisons) including aconitum, eleborus, Hellebores, mandragina, Nightshade. Richard Mabey (1996) cites that the Cistercian monks probably introduced Monkshood to Roche Abbey in Yorkshire in the 12th century. In the 13th century Welsh manuscript 'Physicians of Myddvai', it urges that Aconitum is 'one of the plants that every physician is to grow'. 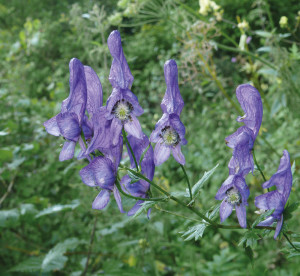 Monkshood are herbaceous perennials arising from tuberous roots, with spirally arranged, palmate or deeply palmately lobed leaves. Zygomorphic flowers (possessing one plane of symmetry), which differentiates them from the actinomorphic flowers (radially symmetric) of Delphiniums for which they are occasionally mistaken for, are borne in terminal racemes. The flower is of two whorls with five sepals that look like petals, the upper sepal forming a hood or helmet. Petals (2-10) are reduced to nectaries (or honey-leaves) with the upper 2 hidden in the hood; the remaining petals are either absent or very small. Stamens are numerous and the fruit forms a follicle. The Genus Aconitum was created by Linné in 1753 and originally comprised five species including A. napellus (Stace 1997).

In its natural habitat, Monkshood is an axiophyte of semi-natural floodplain forests, and pollen records show that it was present in Britain before human occupation. If one discounts critical genera, it is doubtful if more than 15 to 20 endemic species can be accepted in the British flora, and Monkshood is amongst this short list (Turrill, 1989), providing it with a special status amongst our native flora. It isn't a common plant in the wild, with a limited distribution: the range of Monkshood extends across Europe to the British Isles. Aconitum napellus L. is present in the UK as two subspecies A. napellus ssp. napellus L. and A. napellus ssp. vulgare (DC.). Of the several subspecies, only A. napellus ssp. napellus is considered native to the UK; the other species and subspecies occurring being introductions.

Also present in the UK is the garden hybrid Aconitum x cammarum L. a hybrid between A. napellus and the European A. variegatum L. This is the Aconitum that the majority of gardeners and public encounter. Garden Monkshood is generally a planted species that typically does not spread or set seed.

Monkshood is amongst a large number of plants that should be treated with respect and caution. The Royal Horticultural society web pages list over 200 individual species that range in their toxicity: https://www.rhs.org.uk/advice/profile?pid=524 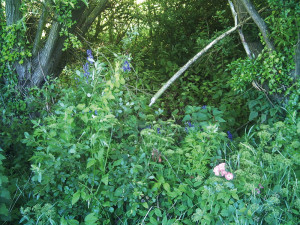 Poisoning from plants is exceptionally rare and as long as some basic hygiene rules are adhered to:

Be aware that small children and elderly people are most vulnerable. Contact with leaves, sap and flowers may cause blisters or burns, a small number of species renders the skin excessively sensitive to strong sunlight. Contact with the plant followed by exposure to sunlight results in very severe, localised sunburn with blistering and long-lasting skin discoloration.