Congratulations to Iain Macleod, Course Manager at Tain Golf Club, who has accepted the role of BIGGA President Elect ahead of officially becoming President next January 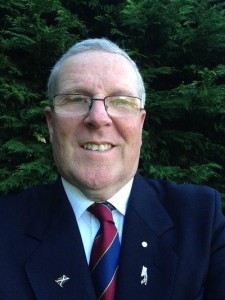 The Association's new Governance structure, which was unanimously voted through earlier this year, has led to the creation of the role of President Elect before Iain takes on the updated role of President.

This move means Sir Michael Bonallack OBE, who has served as BIGGA President with great distinction, will become BIGGA Patron in January. Iain also joins the BIGGA Board of Management with immediate effect.

Iain has been a greenkeeper since he left school in 1972, beginning as an apprentice at Nairn Golf Club then moving to a nine-hole course in Coventry formerly known as The Grange Golf Club. He returned to his native Highlands in 1976 at Tain initially as Deputy before becoming Course Manager two years later.

Tain, which is a traditional links course designed by Old Tom Morris, has hosted many prestigious tournaments and events during Iain's time at the helm including the County Championship, North of Scotland Strokeplay, Scottish Ladies and Scottish Girls events plus many more. The course is cared for by three full-time greenkeepers including Iain plus two part-time greenkeepers who join the team in the summer.

He has served on BIGGA committees for decades, firstly on the Scotland North Section, including time as Chairman and Secretary/Treasurer. He also served on the Scottish Board notably as Education Officer, and was on the main Board of Management from 2002 to 2007.

He said: "It's a great honour and quite unexpected. I've been involved in BIGGA since the very start, and moving forward it's become a more professional and well-organised Association, and I want to help us continue along that road.

"I'm looking forward to working alongside the Chairman and Chief Executive and also being part of the Board of Management. I also have the 100% backing of the committee at Tain and I would like to thank them and everyone at the club for their continuing support."

He has always been particularly committed to greenkeeper education, is part of the current Scottish Region Education Committee and has travelled regularly to America for the GCSAA Conference.

A talented golfer with a current handicap of seven, he is a dedicated family man with two sons involved in golf, is a grandfather and also a Leeds United fan.

BIGGA Chairman Les Howkins MG, Course Manager at The Richmond Golf Club, said: "The position of BIGGA President is a key role awarded by the Board of Management to a member for their service to the Association, their high standing and experience in the greenkeeping industry and the huge respect they are held in.

"No-one embodies this more than Iain Macleod, who has epitomised what the Association is all about during his long and distinguished service at a stunning golf course in the Highlands.

"He is an extremely familiar face not just in Scotland, but across the UK and beyond through his enormous contributions to BIGGA since its inception. I'm very much looking forward to attending various events alongside him, and also know his vast experience and ideas will be a vital addition to the Board of Management.

"I would also like to warmly thank Sir Michael for his superb contribution to the Association during his time as President and I know he is looking forward to continuing as Patron.

"The new Governance structure safeguards the future of the Association while ensuring it takes a more modern, consistent and transparent approach at all levels."

As President Elect, Iain will represent BIGGA at various events, industry gatherings and will promote the Association within golf and greenkeeping.

For the original article, visit www.golfbusinessnews.com.