Once per year, a group of really talented ecologists from the STRI hold a competition called the Golf Environment Awards. The competition is aimed at greenkeepers who want to showcase their green credentials. This year I was invited to witness how the judges assess a golf course, and what a course it was too. 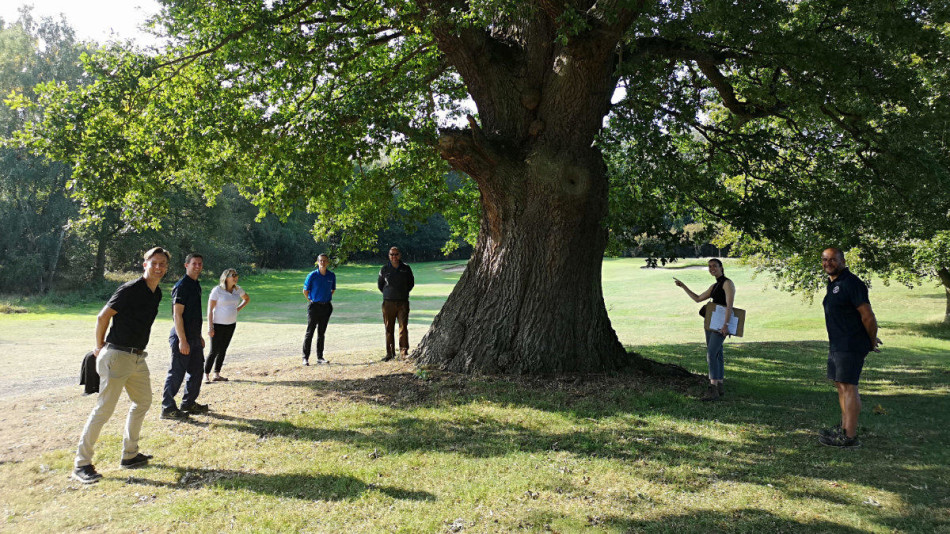 The judges and sponsors checking out Northamptonshire's majestic oak

Having had some success in the past with the awards, I was keen to see how they operate nowadays and if the bar has been raised any higher. Sophie Olejnik, senior ecology consultant with the STRI, was to be the judge at a finalist golf course called Northamptonshire County in the Midlands of England.

I asked Sophie about the awards, numbers of entries and what's going to happen now that BTME isn't taking place next year.

She replied: "The Golf Environment Awards are so important as they give a platform for golf clubs and greenkeepers to shout about, and be rewarded for the incredible work they are doing to safeguard and enhance the environment."

"The Golf Environment Awards really are more than just some industry awards. When you enter, you immediately become part of the GEA family, where experts and novices come together as one to support and share ideas about all things environmental."

"We were surprised with the quantity and high quality of applications submitted this year, given the challenges that the golfing industry is facing right now. The number of entries was slightly down this year, but we still received more than we could visit and take to the next stage of judging. A huge thank you to all those who did enter, or who contacted us to let us know that they were holding off for a year - we totally understand and appreciate this decision!"

Despite restrictions, the STRI team has been able to get out and about, visiting courses from the Highlands of Scotland to Surrey.

"Where COVID‑19 will have the biggest challenge will be the awards evening, which for the first time ever will be hosted virtually," said Sophie, who will be joined in presenting the awards by the STRI's Bob Taylor and Rowan Rumball. "We usually present the awards during BTME in January, but sadly that isn't possible this year. It is our hope that we can make the online awards evening just as special as ever, Bob being the face of the awards as always!"

With the sun cracking the flags, we set off across the course to see some of Northampton's ecology projects. The first is one I have seen increasing in popularity on golf courses, and that is bare sand scrapes with a smattering of heather brashings. This is a hugely important habitat for mining bees, cold‑blooded critters and any other vertebrates or invertebrates that want to use it. When the heather eventually takes a foothold, its flowers will be a source of food for pollinators.

Everyone's a winner and the aesthetics bar is also raised, so it's great stuff. 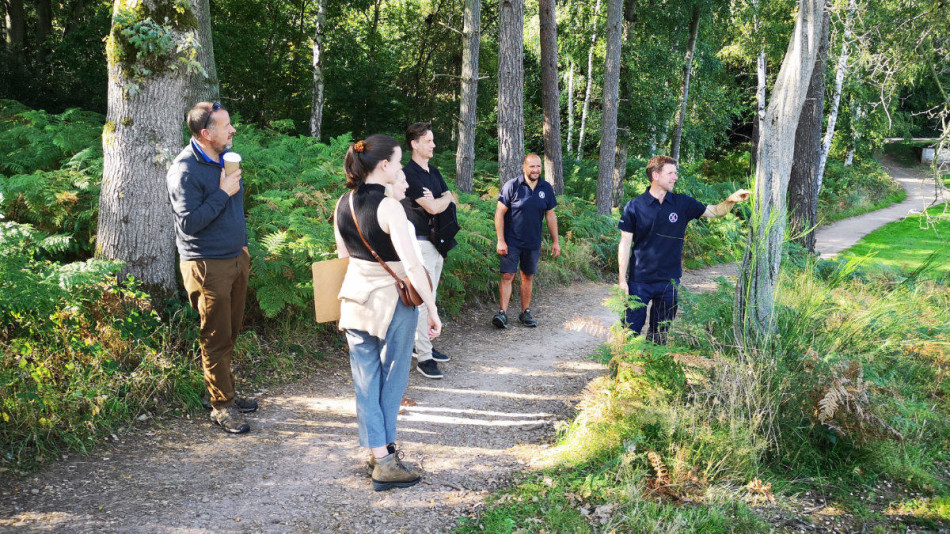 Rough management is an obscenely important task on a course and one which should be carried out to the highest possible level - Northampton have it down to a T by cutting and collecting the arisings, and, as a consequence, create usable compost which can be returned to the course - sustainable course management right there that creates fine, wispy grasses given enough time and continued collecting.

And it continues with owl boxes that can be found onsite in the veteran trees. Don't get me started on old trees, but there's one of the most majestic oaks you are likely to find on any golfing venue. In terms of age, it's only about 450 - 500 years old, but Sophie mentioned there's likely to be bats in the fissures and decaying limbs, so everyone's a winner.

But what of the team leader who is steering the activities at this course? The majority of greenkeepers I visit are happy to offer advice, direction and so on (I know, it should be me giving the advice!) Occasionally, you meet someone who offers their help with little regard for self‑gain, they are simply pleased to see another human become a better, more rounded individual, and Rob Hay is one such fellow.

Rob is the course manager at Northamptonshire County and he said: "When I started greenkeeping in the early '90s, golf would often get bad press, being wrongly accused of over‑watering and over‑fertilising to create artificial environments to the detriment of nature. While in a few isolated cases this may be the case, the majority of golf courses were managed sympathetically and this was often overlooked by both the membership and the public.

"My philosophy has always been to manage the environment and have a golf course running seamlessly through it. I want to provide equal opportunity for golfers and wildlife to enjoy and share the same space."

Northamptonshire isn't well known for its heathlands, but Rob said he is thrilled to be part of a club that recognises its role as custodian to enhance and preserve this rare environment for future generations.

He added: "While we have just started on this journey in heathland restoration, the progress and benefits made so far outweigh the challenges and hard work involved with such a task. The Golf Environment Awards are a fantastic platform to showcase the environmentally sound practices of all golf courses and highlight the resourcefulness of the greenkeepers that work on them, hopefully reducing the stigma that we are a group of grass cutters and chemical sprayers. With every year that passes, the awards grow bigger and better and go a long way to changing the old perceptions of golf courses and highlighting the positive, ecological benefits of golf."

"Being part of the awards and the support they provide goes a long way to reassuring my membership that the change in management practices here does have a wider, positive benefit to the local wildlife and environment." 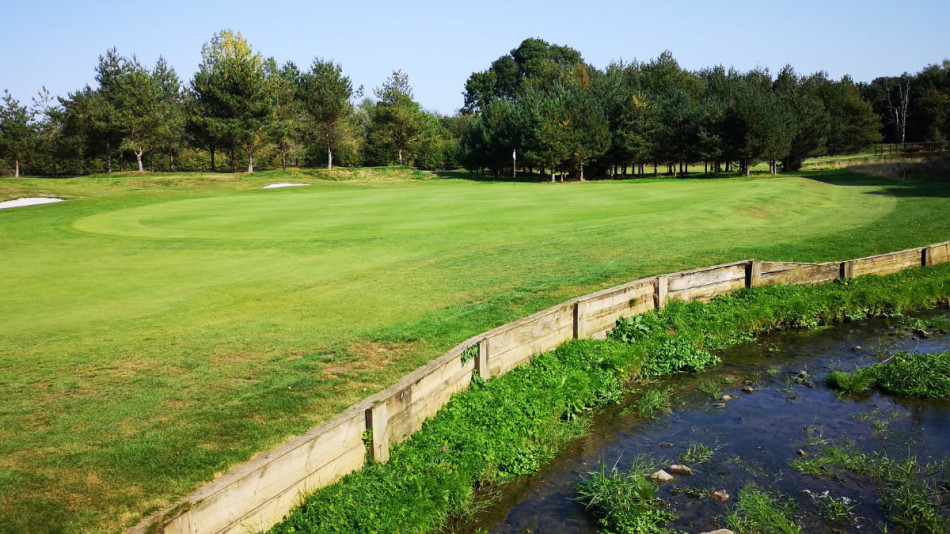 It should be said that without the award sponsors, the awards would not be as successful as they are. Richard Owens of Tillers Turf - a former winner in his own right - joined us at Northampton along with members of the Aquatrols team, who also support the awards.

Richard said: "As a long‑established supplier of golf, wildflower and heather turf products to the industry, Tillers Turf is immensely proud to have supported the Golf Environment Awards for the past six years. It's been a real privilege to join the STRI in visiting a few of the finalists this year and it is fantastic to see so many golf clubs and enthusiastic industry professionals embracing ecological opportunity and practising sound environmental management on these vitally important pieces of land. Well done to all involved."

Rob's deputy, Phil Hales, gave us an insight into many of the species on the site.

There are some, like fire ants and wasps, who have a place within the course's ecology but who you perhaps shouldn't poke with a stick.

The team at Northampton appears to have created a beautifully maintained golf course that moulds perfectly well into its surrounding environs. An example of this is the natural stream running through the course. The team is managing it to a point where there are still good amounts of vegetation showing, however, sections of the waterway are managed to allow free movement of water off the course. I completely understand if your water courses are completely cleaned of vegetation, but perhaps you should consider leaving some for aquatic and semi‑aquatic wildlife to find a habitat to live in?

Looking further ahead, what is stopping you entering next year's awards? Every course I visit has some sort of wildlife project, like bat boxes, ecopiles, rough management and so on. Give it a try - what do you have to lose?

The Golf Environment Awards Finalists 2020 are:

Environmental Golf Course of the Year

Conservation Greenkeeper of the Year

Outstanding Environmental Project of the Year