For the upcoming 2008 Beijing Olympic Games there will be about thirty-seven venues in all, as well as 58 training sites with an estimated construction cost of $1.65 billion. The jewel in the crown is The Beijing National Stadium. It is located at the Olympic Green, has a seating capacity of over 90,000 and will be used for the opening and closing ceremonies of the Olympics as well as for soccer and athletic competitions.

The Beijing National Stadium is commonly known as the 'Bird's Nest' because of the curved steel structure that encloses the stadium frame which, from a distance, looks like a framework of branches and twigs commonly found in a birds nest. The spacings between the framework of steel allows for good natural air movement and ventilation. There is also a cushion system designed within the structure which fills the spaces within the building to regulate the weather.

Thirteen stadium designs were showcased to the general public who voted on their favourite which was won by the Bird's Nest. Swiss-based firm Herzog & de Meuron, in collaboration with China's Institute of Architecture Design and Research were the winning architects. It is believed that the total cost for the stadium will be around $500 million. Construction of the Olympic village, which is located within walking distance of the stadium, is well underway with many thousands of apartments already completed. Coupled with this, the sod has been turned on a vast Olympic park which is located almost across the road from the Olympic stadium. 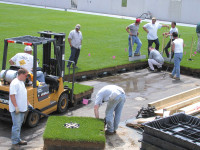 At present, the stadium construction is well underway and the vast majority of work has been completed. The birds nest and inner frame are clearly visible when one travels near the Olympic village in Beijing, although a vale of secrecy surrounds the interior of the stadium for the opening ceremony.

A modular pitch is being utilised in the Olympic stadium, with Michigan State University appointed as the consultants for the project. MSU were also the consultants for the modular field at the Athens Olympic stadium in 2004, with Professors Trey Rogers and Jim Crum acting as chief consultants. At present, the modules have been filled with a suitable rootzone and the field sown. The construction has taken place on a site in the outskirts of Beijing.

Numerous other stadiums for various sporting events have been constructed or upgraded. During an International Sportsturf Conference held in Beijing, I had the privilege of seeing some of the work that is being carried out on the facilities including the Tianjin Olympic Centre Stadium and the Fengtai Softball Stadium.

The Tianjin Olympic Stadium construction commenced in 2003 and the running track was being installed when we arrived. The stadium can hold about 60,000 people and uses natural tall fescue grass on a sand based rootzone. Much work is being carried out to ensure that the playing surface is to a very high standard, which is quite difficult with the reduced light and humidity in the stadium. The stadium is located about 2.5 hours from Beijing and will host various track and field events throughout the Olympic Games.

The Fengai Softball Field is located within the city of Beijing and will likely be the main softball stadium for the Olympic Games. The stadium holds about 13,000 people and is a very modern facility. Zoysia grass is used on the field with a sand based rootzone. The playing surface is in pristine condition with the zoysia grass, a warm season grass, performing very well for this particular situation. 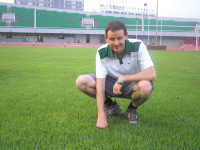 Without doubt the shear magnitude of construction projects being undertaken at present is amazing and hopes are high that the 2008 Beijing Olympics will be a huge success.

About the author: Dr. Tim Butler is a Sportsturf Science Agronomist. He has lectured on Sportsturf Science in both America and Ireland and consults on all aspects of Sports Pitch, Golf Course and Race Track surfaces including construction, renovation, drainage, agronomy and environmental enhancement.