by Jake Barrow
in Hockey, Schools & Colleges, and Synthetics
on 12 Jan 2018

With Birmingham's 2022 Commonwealth Games bid successful, the city's university has invested heavily in new synthetic surfaces to allow it to host the games' hockey tournament. Head Groundsman Mark Roche details the work that has been undertaken in recent times. 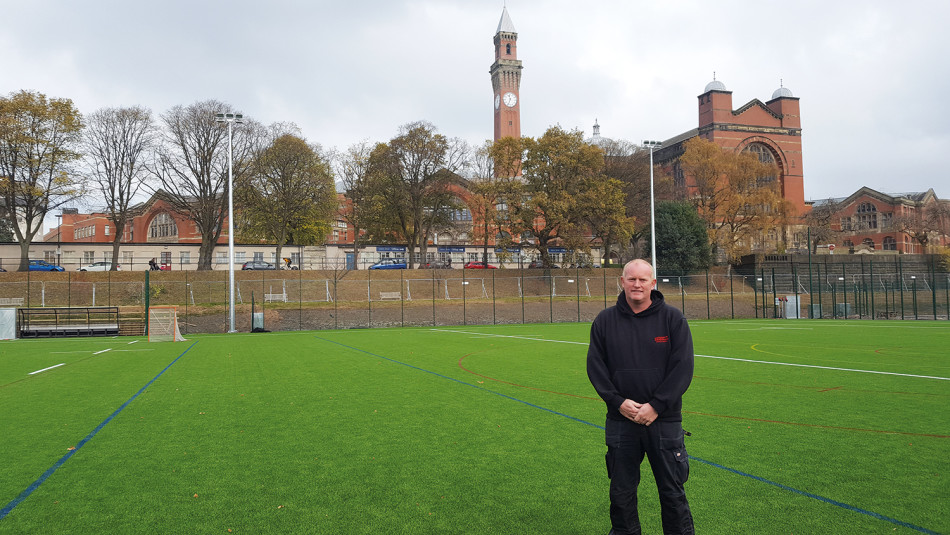 The University of Birmingham has recently had Olympic-standard synthetic surfaces installed, as its parent city successfully bid to host the 2022 Commonwealth Games, with the university set to take the reins of hockey events.

The pitches, like two full-sized 3G surfaces also recently installed on the site, are made from Tiger Turf's WetPro water-based synthetics, and are being installed by McCardle Sport.

The construction is like a road. The stone acts as an attenuation, then porous Tarmac is laid on top of that, and a shock pad above that, finally with a layer of artificial grass carpeting on top. The pile is extremely short, as demonstrated in some of the images.

The new pitches were also used soon after my interview with the university, for perhaps their biggest event of the year, 'xpLosION '.

xpLosION is both the university American football team's season-opening game and a huge fireworks display, which can cost around £2,000. Every year, roughly 4,000 people stay to watch and have a drink on an embankment above what is now the main 3G pitch.

These will be joined soon by ten adjacent tennis courts, as part of a larger programme to reinvigorate the university's sports facilities.

Mark Roche, 41, is the uni's Head Groundsman. His sports maintenance team consists of six members over four sites, including four grass rugby pitches and seven football/lacrosse pitches, as well as the two recent 3Gs, a newly built athletics track and the new hockey areas, all maintained by the team. 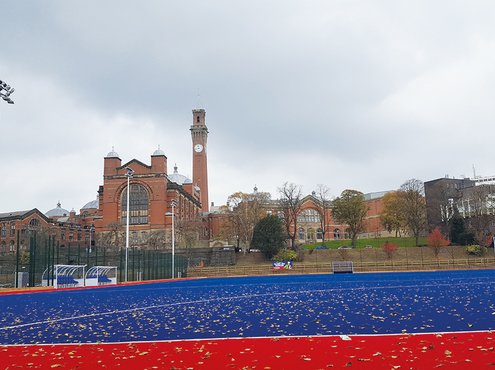 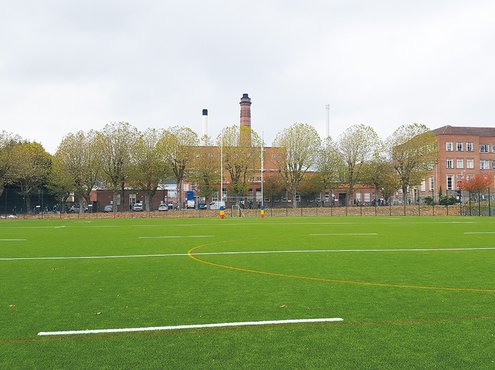 Since the main pitch below the university's clocktower, the pitch used for xpLosION, was transformed from natural turf to artificial, Mark said he has felt some reduction in pressure on pitch presentation:

"I hadn't really thought about that, because I've only had the new pitch for three weeks, but I'm not looking out of the window all the time."

"And I'm not constantly having to mow the pitch, aerate, protect the areas that are under heavy wear. The pressure has been released. Having the artificial is quite nice in that respect."

On the quality of the WetPro surface, Mark said: "It's all about the ball roll for hockey. The reason they're water-based is that it retains the water from the surface, like excellent drainage. So, it speeds the ball up lots. It's not quite as useful for football, because the ball bounces a little more than you'd like, but hockey is all about speed."

"Our previous carpet on the equivalent surfaces was by AstroTurf, which was quite an old-fashioned product in the context of modern synthetics and how much water they can retain."

"The original thinking behind these newer constructions is to conserve water in countries like India, where hockey is absolutely massive in terms of its scope and coverage, and water is at a premium due to the heat and large population." 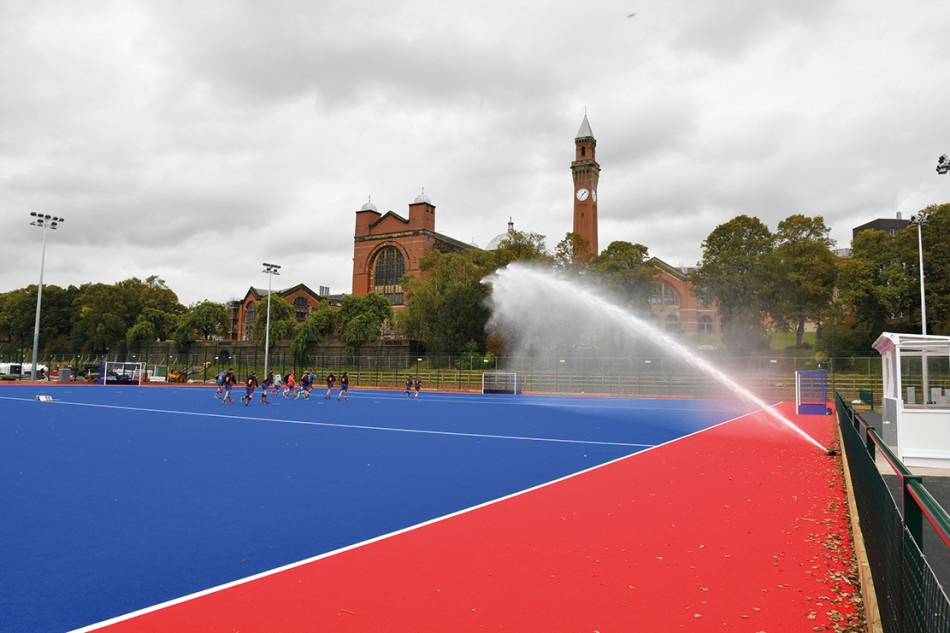 "So, although it sounds bizarre, our artificial pitches get watered. That creates that slick effect. They are watered for about ten minutes prior to every game, weather conditions permitting. Midsummer, they may even be popped on at half-time. During winter, they might not need to at all."

"These pitches are used for over fifty hours per week, so we do that watering quite often."

To stay within warranty on such pitches requires a level of work approaching that of a natural pitch, and significantly more than the previous equivalent surface required when installed around eight years ago.

Due to this extra workload, the university requested that some maintenance equipment be included as part of the package, which Tiger Turf supplied.

"The technology has moved on a lot too," he said. "We went to Charterhouse, and they both sold us some equipment and modified ours. We got some useful kit."

Before getting into groundsmanship, Mark was a greenkeeper, starting as a casual worker at the iconic Belfry during the construction of its PGA National Course.

Looking back on his time at the famous club, he said it set him up with his standards and insistence on quality, and that his staff would attest to his determination to, for example, maintain all equipment at the same cutting heights.

When preparing for even minor tournaments, the Belfry's staff were required to perfect their consistency in such areas, and to replicate each action exactly across the course. This was all under the supervision of then-Course Manager Derek Ganning and Head Greenkeeper Bevan Tattersall. 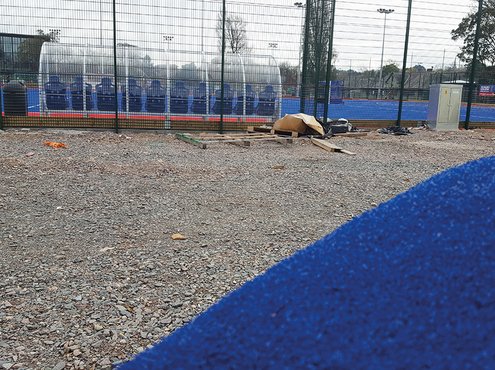 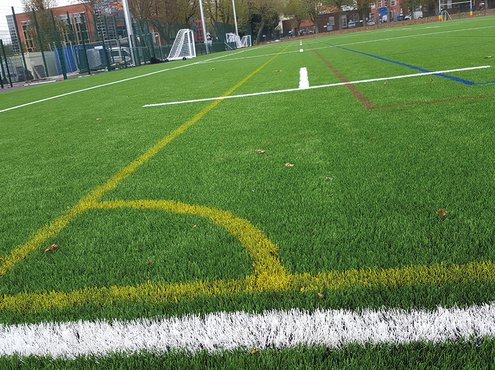 Mark had been working in an office as an insurance clerk, hating every day of it, and had a friend who worked at the club already, who told him that "it's lovely outside".

With no responsibilities, at just nineteen years old and still living with his parents, he could simply drop the office job and move on. "I've never looked back," he said.

He studied an NVQ Level 2 while working there (and eventually went onto Level 3 and gained a foundation degree), before moving to a small golf club local to his home in the suburbs of Birmingham.

"So that was going from a massive entity like The Belfry to a small, local golf club. I saw both sides of the greenkeeping spectrum."

"I basically left there because I wanted more money. I went to work at the local authority as a supervisor, which was another one I hated. I stuck that for six months."

"I was just travelling around with no emphasis on quality, smashing jobs out as quickly as possible for as little money as possible, then on to the next."
In 2002, he applied directly from there to the head groundsman post he currently occupies, with his experience in that supervisorial role providing the university with enough evidence of his competence to take him on.

In one sense, it was a step down in responsibility. He had been managing nearly twenty staff members, some of them working at Witton Cemetery, which is Europe's largest.

I asked him how he found these changes in his responsibilities: "It was fairly easy, to be honest. The grounds element of the university's hierarchy is quite isolated from some of the other departments in this huge organisation." 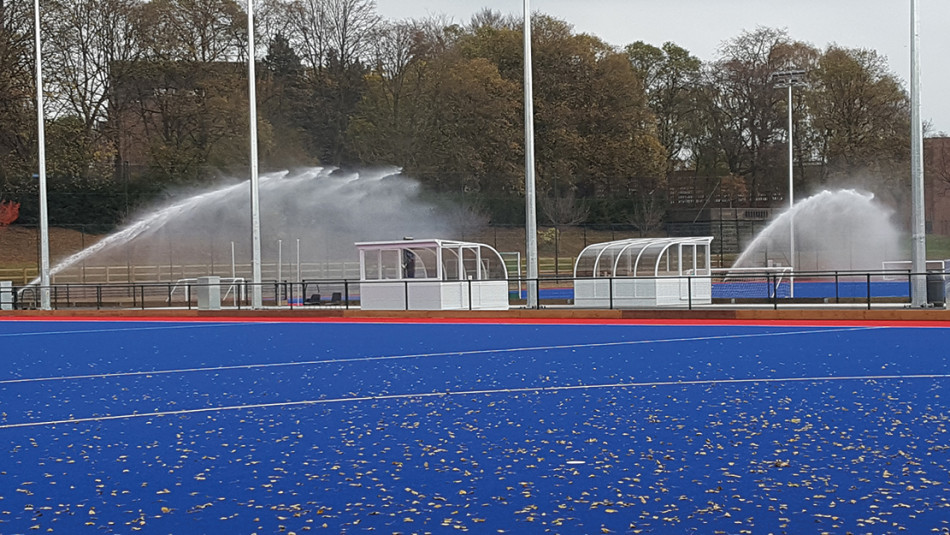 "Our staff account for less than 1% of the overall workforce. When you work on a golf course, you represent more like 90% of the business."

"What that means is; if you're not performing on a golf course, the whole thing falls apart. Here, they don't have to worry as much. When we have problems, they don't have an immediate impact on the business."

"I'd argue that you're not under the same immediate pressures in a job like this as you are when you're out on the course."

"And it took me a while to get my head around that when moving into this subsector. At first, when equipment failed, I'd be shouting "we need to get this replaced", and it became apparent over time that this wasn't urgently the case."

In theory, the team are employees of the University of Birmingham Centre for Sport, rather than the university, because departments within such establishments tend to act as subsidiaries.

This means Mark is further detached from his department's financial management than most groundsmen, because the interaction tends to be between the university and the department.

They try to replace one piece of equipment per year on outright purchase, which gives an indication of their decent funding levels for a six-man team. Sometimes, larger outlays like tractors can be spread over two years instead. 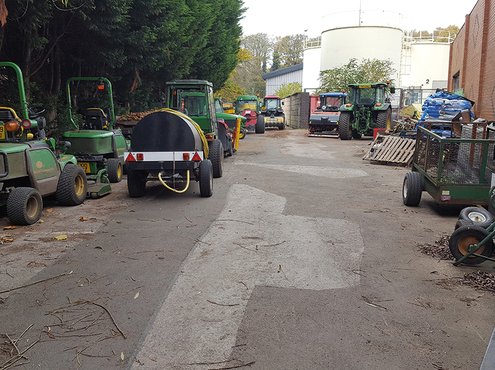 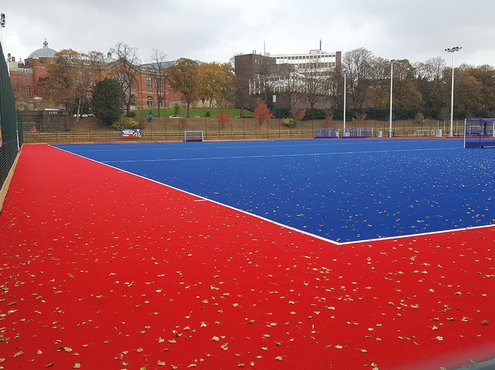 Unlike many organisations, anything to do with construction or use of heavier plant machinery is contracted out by an entirely different department, which frees the grounds team up to focus on their core tasks.

They have no loyalties to manufacturers or sales people. Mark enjoys the flexibility and purchasing power that comes with companies needing to bid for customers and vice versa.

Just days before my visit to the university, Mark had a new John Deere Gator on demonstration. A new version of the Gator will be debuted at BTME 2018 in Harrogate; the company having just unveiled another in Birmingham during November 2017.

A "godsend" to him has been the Weidenmann Terra Spike, which they've had for about six years. He said that having it onsite has completely transformed the profile for the better, as the previous one was very old.

At one point, the university used help on its agronomy, but now Mark has the underlying knowledge to interpret soil sample analysis and plan fertilisation programmes accordingly.

This is useful, because the type of land across the university's four sites "varies massively", according to Mark.

The Metchley Pitches, which is the uni's main site, he described as "historic parkland", and hosts many of the university's 15,000+ trees. This has been rented from the council for the last twenty years, and is only about a mile away from the others. 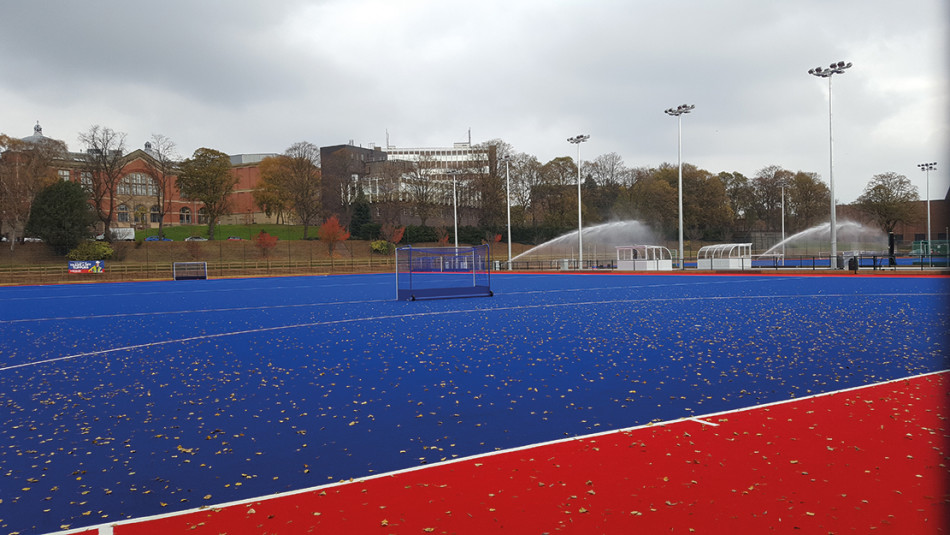 "I'm led to believe," Mark said, "that the day the university took over the site, the grass was about three feet long. And there is no drainage in there at all, through what is eight inches of a reasonable-quality topsoil, on top of a clay base."

"We do well on that pitch now, although that's down to many years of aeration, renovation and adding sand to the top of the profile."
Just down the road, in the student-heavy Selly Oak, the second site is clay-based and would require even more work, although it thankfully commands a simple drainage system.

The Selly Oak site is also used heavily, mostly by the University of Birmingham School (state school), and this is another reason for the transition to synthetics.

Central pitches are hired out frequently to the community to maximise both publicity and revenue and, as an artificial surface can handle more hours of footfall per week, the new surface allows for a healthier revenue stream.

Aesthetically, the team are torn, as we often hear from groundsmen whose natural surfaces have been replaced. Mark explained this via anecdote:
"We had letters from a pilot once, who flew into Birmingham Airport. At the time, with it being the focal point of the campus, we used to mow patterns into the main pitch, and generally make it look very attractive."

That is surely the balance to be struck when choosing the surface upon which to play in such a prominent location: 3G is durable, potentially profitable, and enjoyed by sportspeople; meanwhile, fine turf can prove a point of pride for both its maintainers and its spectators.

As Mark said: "It was a lush image against its city location. Now, it's basically another big bit of plastic."