Whilst hordes of eager shoppers excitedly jostle for a position at the shops, or alternatively sit in their pyjamas at home accompanied by a cup of tea and an eager laptop, ready to surf the waves of this year's Black Friday pre-Christmas shopping sale- the colour black is rarely an adjective which elicits much excitement in turf managers, unless perhaps it is preceded by the words "pint of the" and succeeded by the word "stuff".

The colour black in natural environments tends to point towards death, decay or general poor health i.e. something's not as it could or should be.

It is often said that a picture says a thousand words, well if that is the case then which words could be employed to accompany the picture on the right? 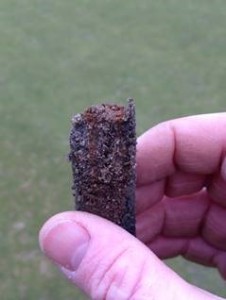 The eponymous picture shows a core I took from a USGA specification golf green in the early part of 2015. The resolution is fairly high so if you click to maximise it you will get good close detail.

One thing it nicely illustrates is excess iron which has oxidised (rusted) in the soil profile.

A few things are worth observing;

• The roots down the centre are growing in the space left by a solid tine following aeration.

• The soil next to these roots is a nice healthy sandy colour, this is because the air from the hole is creating a nice environment for aerobic bacteria. This is good.

• The two vertical orange lines are the oxidized iron in the rootzone which rusted once it came into contact with the oxygen in the air, hence the original size of the hole is nicely marked by this rust.

• The soil outside of the rusty lines is the indicator that more than simply excessive iron is not in balance here, you will observe that this soil is black, this is black layer.

• Rather than heralding a stellar deal on a new 60" flat screen television one might associate with Black Friday black layer here's indicates a lack of soil based oxygen and an excess of water, thus an anaerobic bacterial population, as a turf manager this is not a "stellar" situation to find oneself in.

• For those of you lacking smelly vision this core smelt like the bottom of a pond or stagnant puddle. That is because the anaerobic bacteria process sulphur and release hydrogen sulphide gas.

This is a really, really horrible environment for grass to grown in, frankly its poisonous.

This situation occurs because of an unsavoury cocktail which occurs when sulphur which is often bound with other elements or compounds in fertilisers - iron and ammonium being prime examples - occurs to excess with iron in the soil profile.

Iron is often applied as a simple cost effective way of controlling moss, creating dark colour and helping turf to resist disease but; for every action there is a reaction and every turf manager, whether at a world class venue or the local bowling green should aim to make considered decisions about what it is they are applying to their turf and what the effects may be simply over and above making it look more attractive in the short term.

A few points in regards to iron worth considering;


It is important to keep this knowledge in perspective; Some iron is ok, the plant requires it to function and it can be a very useful tool for hardening cell walls against disease pressure and harsh winter weather but an excess of the wrong type of iron, especially when combined with too much sulphur and combined with water is a very bad thing if you are an aerobic bacteria or a grass plant.

In terms of overcoming black layer then three main objectives should be the cornerstone of any programme.

1. Increase soil oxygen, either through new or improved drainage, physical aeration, or oxygen additive products which can be sprayed onto the surface when conditions do not favour physical aeration.
2. Flush excessive oxidised iron through the profile with wetting agents
3. Select fertilisers with lower sulphur values and use chelated forms of iron.

A word for ferrous sulphate.

Ferrous sulphate - or sulphate of iron as it is commonly referred to - by its very nature contains a lot of iron and sulphur and when used without due consideration can contribute to the problems outlined above however, it should not be discounted completely. As we have seen iron plays a role in plant resilience and sulphur is a macro nutrient required in the synthesis of enzymes, vitamins and root development, indeed sulphur is the fourth major nutrient after nitrogen, phosphorus and potassium in terms of plant requirement. As a result ferrous sulphate can be a valuable tool for eliciting early season plant function whilst helping to toughen up and repair from winter damage. I have witnessed first-hand on the sports pitches I used to manage how well they responded to a late February or early march application of soluble ferrous sulphate, the important thing is to not become overly reliant on one tool in the armoury.

As with many aspects of life perspective and balance should be favoured over excess, hopefully those looking for a Black Friday bargain will not fall foul of this principle.