Blackpool have been forced to re-turf a section of their Bloomfield Road pitch, just 11 days before they host their first league game against Rochdale 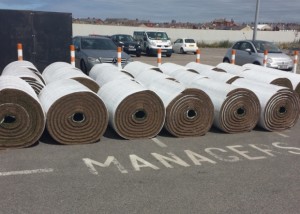 Last week the club confirmed there had been 'slight damage' to the playing surface following the Neil Diamond concert staged at the end of last month.

After initial work from groundsman Stan Raby, it was decided a full re-lay of the area in front of the North Stand would be necessary - the section of the ground on which the stage was built.

Raby and his team now face a race against the clock ahead of the coming season - which kicks off on Saturday.

The Gazette understand a specialist contractor has been brought in to provide one thousand rolls of turf - delivered to Bloomfield Road and laid on Monday afternoon.

While ground staff are believed to be confident the playing surface will be ready for the opening game, the situation is far from ideal, particularly after the problems Blackpool faced last season.

A number of managers and players complained about the state of the pitch which Middlesbrough boss Aitor Karanka described as 'impossible to play on' accusing Pool of a lack of respect for paying fans.

Following such remarks the Football League stepped in to ask for an explanation.

Manager Neil McDonald revealed 'overuse' was the reason behind the condition of the surface, with ground staff blaming excessive training on the pitch.

Pool open their League One campaign away from home against Colchester United this weekend and were breathing a sigh of relief when last month's League Cup draw saw them playing away from home on the following Tuesday. The pitch has to be ready for the visit of Rochdale to Bloomfield Road on August 15.

For the original article, visit www.blackpoolgazette.co.uk.