The small town of St Blazey lies on the south coast of Cornwall, just a mile or so inland from the popular Par Sands. This is grockle country 'par' excellence. The town's football club competes in the South West Peninsula League Premier Division West and is considered to be among the most successful clubs in Cornwall. Lee Williams met with Paul Bowden, the club's volunteer groundsman, amongst other things! 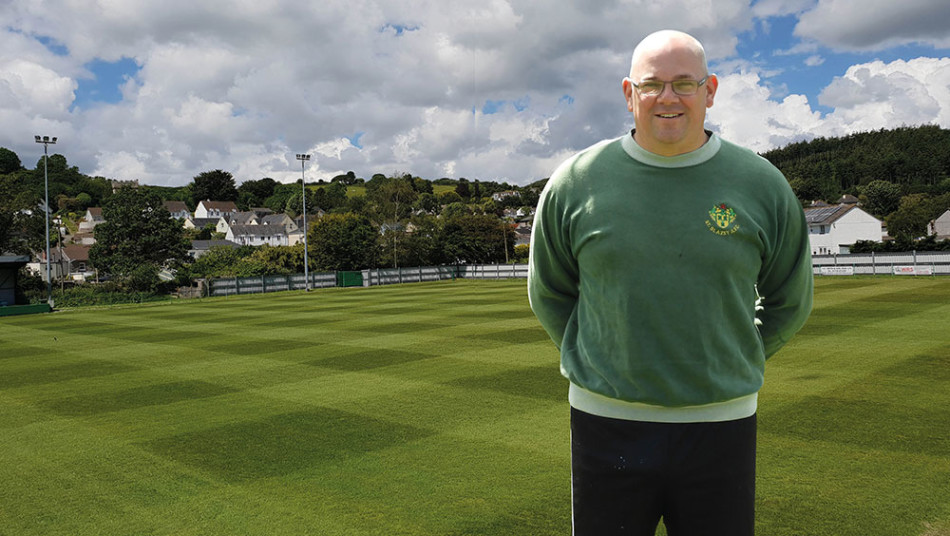 St Blazey AFC was formed in 1896 as a junior side, attaining senior status in 1910. Their home ground is Blaise Park, a 3,500-capacity stadium which opened in 1906. The ground was built on reclaimed land from the nearby estuary in the town. During the First World War, the pitch was dug up and the underlying sand used to fill sandbags.

Paul Bowden is not only the club's groundsman but also Vice Chairman. He dedicates as many hours as he can to the pitch around his full-time job as the manager at the local Co-op. He has been attending first-team football matches at St Blazey since 1996 but is also a keen supporter of Plymouth Argyle FC where he is a season ticket holder.

Three years ago, the areas around Blaise Park required a little TLC, so he decided to give the club a hand. "I started off by helping out with general tasks like weeding, strimming and cutting the grass banks. The club, unfortunately, found itself having to make the groundsman redundant due to a lack of income, so I found myself starting to do bits on the pitch and, you know what it is like, once you have made one part of the pitch look good, it leads you to want all of the pitch to look great. It has moved on from there really and I'm now the groundsman on a volunteer basis."

When I visited Paul, he was on annual leave for a week and he was using all that time to get the pitch ready for friendlies which were scheduled to kick off in a few weeks. Assisting him was his dad Stuart Bowden. 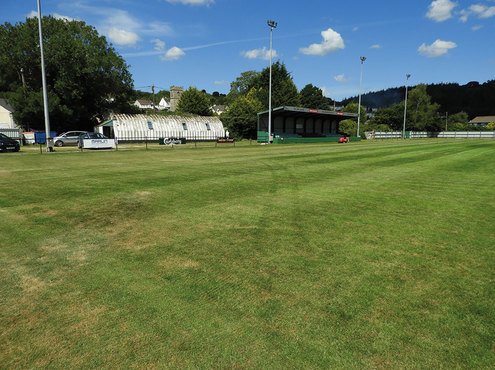 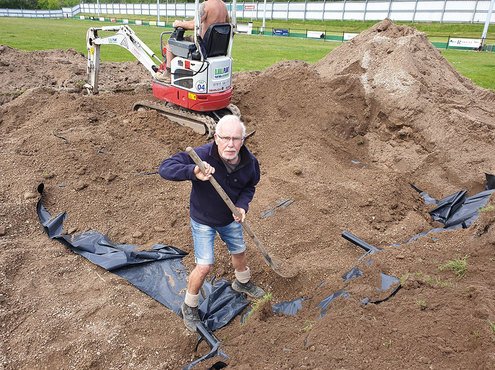 How do you split your time between work and volunteering at the club? "It is basically a matter of fitting it in whenever possible. This time of year, with the light evenings, it's ideal as I can get down for around 6.30pm and still have a few hours light to work with. I generally have a Thursday or a Saturday off, so it can be a Thursday morning down here and then a Saturday morning preparing the pitch for a game. I intend to spend the rest of this week getting the grass cut down and marked up ready for the friendlies at the beginning of August. I have another week off in a couple of weeks' time. I am fortunate to get a decent number of holidays working for the Co-op, so I can use a bit of that time to prepare the pitch."

The club has a committee, so no one individual has complete control of the club's finances. "If we have something big that needs doing, such as machinery repairs, we will ask the committee if can we afford it? General day to day stuff, like fuel for machines and linemarking paint we can just go ahead and purchase. We rely on sponsors and the clubhouse to help bring in the much-needed cash flow."

I was interested to learn how the Covid-19 crisis has affected the club. "The clubhouse has been completely shut since the end of March. We were lucky enough to receive £1500 grant money from the pitch fund initiative, which has allowed us to carry out some renovations. We also took the opportunity to spruce up the clubhouse with a lick of paint, and had a big tidy up, something we just never got around to doing. The bar is back open now and, with football restarting soon, I'm confident we will get back on the right track."

Paul is grateful for the help he receives from the other members and supporters of the club. "I want to give a special mention to Chris Lydon, who helps me out with the stringing out of the lines at the end of the week while I'm up and down doing the marking. Amos Putt will go around doing a bit of strimming and hand mowing here and there. Finally, there is Derek Isbell, who does the general maintenance around the ground."

The pitch is constructed on what used to be the seabed back in the 1800s. Paul tells me the church wall by the traffic lights, which is about 500m from the pitch, used to be the harbour wall. "The sea would come in and go straight up the river so, if you dig down, there is a lot of sand underneath which helps with our drainage. When the pitch is flooded, it is not because of the rain that has come down, it is because the water has come up through the water table. But, literally overnight, the water will disappear and the next day it is bone dry. We do have drains in the pitch which run pretty much three-quarters of the pitch, with the outlet at the back of the goal. They do work well, but with some of the levels of rain we have experienced in the last year we did lose two fixtures, but there's nothing we can do about it; we just have to let nature take its course."

On average, the pitch hosts sixty plus games a season, accommodating first team fixtures, cup games, the second team and the local schools' finals. The club are also looking to set up a youth team which will add more pressure on the pitch and Paul. "It is very rare in the football season that we don't have a game on every Saturday, plus training through the week."

Paul would like to be able to carry out various other maintenance tasks on the pitch to help improve the surface, but he is limited in what he can achieve. "Our Jacobsen Tri King ride-on cylinder mower is our main piece of equipment, which has just come back from being fixed again this summer and the blades sharpened. We will cut at a height 25mm in the summer and lift the height of cut to 28mm in the winter. I would like to scarify the pitch at the start and during the season, and it is something we are looking to hire in. We are also looking to get some new machinery in as the machines we have are quite old, and we do not have anything that can do the scarifying. We don't even have a brush for the pitch at the moment; this is where we need to be investing some money going forward." 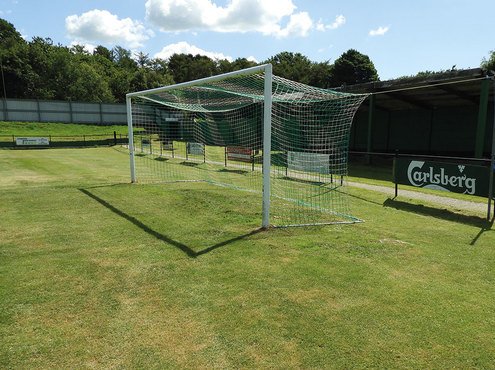 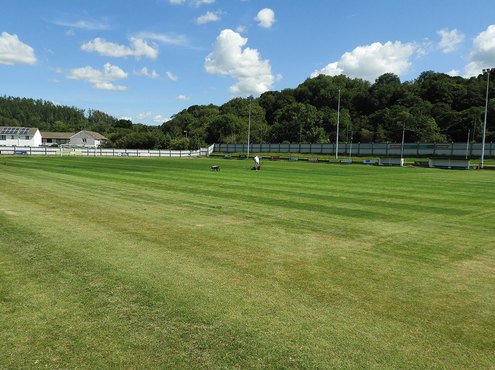 At the beginning of summer, they managed to take out a mini renovation on the pitch. "We had a contractor come in to verti-drain, overseed with the disc seeder, using MM seed, and fertilised with Evolution. With the recent weather, the pitch has really taken off and we have struggled to keep it under control!"

The club recently had a visit from Simon Johnson, Regional Pitch Advisor (Southwest) for the Grounds Management Association. "He came and took soil samples, then provided us with an advisory report on the pitch and one on machinery as well. One of the advisories we had, which came as no surprise, was that our machinery is old, and it would be wise to invest in some new equipment. There is a grant available where we can apply for seventy percent of the total cost of the machine, but we must find the other thirty percent. Obviously, at the moment with everything that has gone on, there is not much money in the pot."

Paul is also grateful for the support and advice he gets from David Bevan, Technical Sales Representative for Agrovista Amenity. "I like to pick Dave's brain every time he visits us. He helps improve my knowledge which, in turn, can only benefit the pitch. It would be great if we had the budget to have a fertiliser programme put together. Still, for now, we apply two slow-release applications of fertiliser a season which seems to keep us going."

In the past, the club has been able to invest in new/second-hand machinery. With every passing season, it is becoming more costly to repair and service their existing equipment. "The main mower we have was bought new sixteen years ago, and some of the other little ride-on mowers we have are second-hand. We have them done up, service them every season and just try to get the best out of them. If we need a small rotary, we will look at Facebook and eBay. Just recently, we picked up two for £25 each. If we can get two years out of them that's great, especially when we are using them on big areas of grass, so when they do eventually burn out, it has not been a big loss."

In the long term, Paul would like to invest in a tractor with attachments so he can carry out his own maintenance programmes and renovation works. "This would save us money as we currently rely on outside contractors to carry out the work. The other advantage would be the money we would save on repairs. We had to spend £1800 on the main mower this year. This meant we had to do a bit of crowdfunding, plus the players and supporters generously added to the pot. We managed to raise £800 to go towards the repairs, which was fantastic."

In the summer, with the pandemic shutting the clubhouse down and no football taking place for the foreseeable future, Paul took the opportunity to address a drainage problem they had in one of the goalmouths. "We took some samples and found the top twelve inches were really hard, and underneath was pure sand. So, the top layer was just stopping any water running through, and we also found the drains had collapsed. We decided to hire a digger and dug right down to the water table, and then installed new drains and backfilled with new sand and topsoil. Since the goalmouth has re-established, we have had some heavy rain and, touch wood, so far we have no issues with standing water." 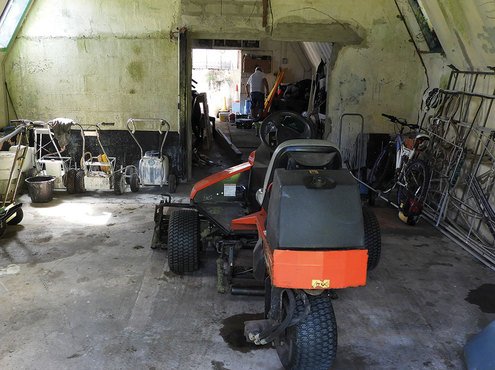 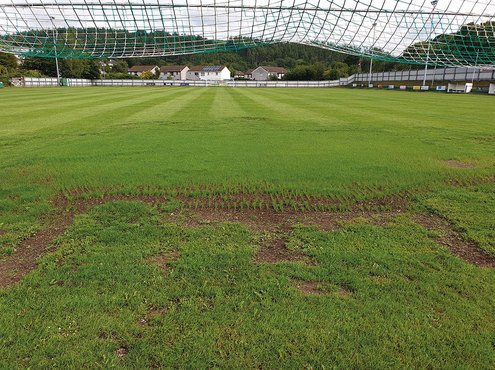 Geese from the pond near the club are regular early morning visitors to the pitch. "We often find three or four of them nipping away at the grass, so we have to shoo them off, and they are quite big. But, apart from that, we do not really suffer from pests such as rabbits or foxes."