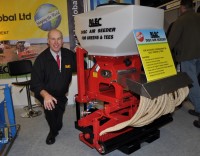 As well as selling a new two-leg gravel bander, launched at the show, the BLEC team also sold a Blecavator, Multiseeder and GKB Sandfiller. They are now dealing with enquiries for their new close-space disc air seeder for greens and tees.

"It was a highly successful show for us," says BLEC managing director Gary Mumby. "We took a great many enquiries to follow-up after the show and were delighted to sign some significant sales deals at Harrogate."

The three new products on the stand were the BLEC Two-leg Gravel Bander designed for compact tractors. Bands are produced at 60cm centres.

The second was the new BLEC Close-space Disc Air Seeder with 3cm spacing for work on fine turf, particularly golf greens and tees. The air-seeding system gives maximum sowing efficiency and is suitable for compact tractors from 25-45hp.

The third launch was the new BLEC Ezy-drain which will drive a 50mm diameter hole up to three metres deep into badly drained areas - pushing through to the sub-strata. The resulting hole can be filled with drainage material. 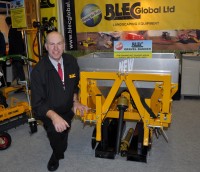 The Ezy-drain is suitable for tractors from 30-60hp and works on the principal of a small pile driver.

Also on the stand was the tried and trusted GKB Sandfiller which has been specifically designed for aerating and draining sports turf. This tractor-mounted scarifier and sandslitter removes and collects spoil and fills grooves with sand in one pass.

Says Gary Mumby: "Harrogate is a very important show for us and it kicks off the year well with a discerning audience of sportsturf and landscaping professionals."