A NEW tractor-mounted scarifier and sandslitter which removes and collects spoil and fills grooves with sand in one pass has been on a demonstration tour with BLEC managing director Gary Mumby.

The Sandfiller, manufactured by GKB Machines, has been specifically designed for aerating and draining sports turf.

It has received wide praise in trials on golf courses and football pitches.

The Sandfiller is unique in that it can cut grooves at 40mm centres with carbon-tipped blades that go as deep as up to 4cm. The spoil is removed to a hopper which can be side-tipped. 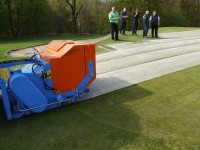 Within the same machine is another hopper which contains kiln-dried sand which is deposited in the grooves - thus completing the slitting and sanding operation in one pass.

With a three-point linkage and 1.2metre working width, the Sandfiller is ideal for tractors from 40hp upwards.

"This is an ideal machine for sports areas that previously had to be treated twice by using at least two machines," says Gary. "One would cut the grooves and another would apply the sand. Now this operation can be carried out by the Sandfiller in one pass on the back of a tractor."

Gary Mumby launched BLEC (now BLEC GLOBAL) in 1986 with wife Sue, and was previously a landscaper who realised he could design and manufacture specialist machines for the grounds care industry.

Their factory near Peterborough employs around 25 people and most of their machinery is British manufactured. Blec also imports other specialised equipment such as the range of quality machines from GKB in Holland. BLEC have also launched the MULTIVATOR, a multi-use machine carrying out a wide range of tasks achieved with only one drive unit.