Bootle Football Club in Merseyside recently installed a new state of the art hybrid pitch at their home ground. It is part of a pilot scheme supported by Sport England, The Football Foundation, The Football Association and with support from the Liverpool County FA. Lee Williams met up with Head Groundsman Dave Jones to discuss the challenges he faces. 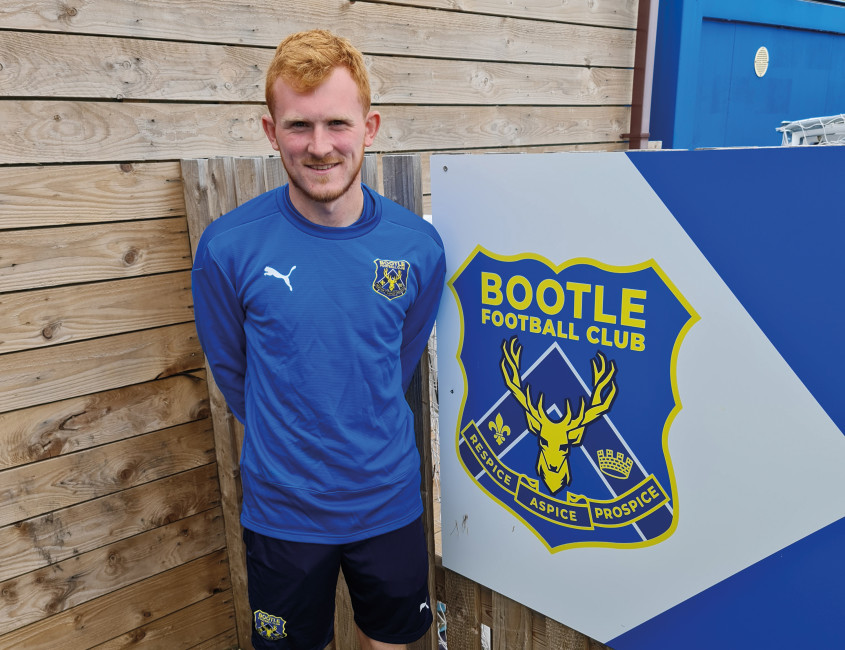 Since the installation of Bootle Football Club's new hybrid pitch, it has been in constant use with various teams and the community having access to the facility. Dave Jones, the club's twenty-one-year-old Head Groundsman, has the task of managing the maintenance of the surface.

The Horizon Flex grass carpet system was installed by J Mallinson (Ormskirk) Ltd in the summer of 2020. Dave explains the construction of the pitch. "A new drainage system was first installed with primary and secondary drains put in. This was followed by a new automatic Rainbird irrigation system with twelve sprinklers installed down the middle. No sprinklers were installed down the side of the pitch due to the budget available, so we have to use travelling sprinklers to cover the wings, which is not ideal. The system is fed through the mains water via two 20,000 litre tanks. Once this work was completed, the pitch was re-levelled and the Horizon carpet was installed, sand was then spread over the surface, brushed in then overseeded."

"PSD were involved from the construction phase up until the first ball was kicked this season. They took all the soil samples and also carried out the QS tests last year and gave us the results. It was good to have them involved as there were times when I just needed to pick up the phone and get some reassurance."

In the height of the season in 2020, the pitch had on average twenty-eight hours of use a week. With the majority of the cost of installation being funded by the Football Foundation, the club, in return, must give twenty-five hours to the community so local kids teams can go in and train. The pitch also accommodates Bootle's first team, under 21s, under 18s, reserves and some Sunday League teams. 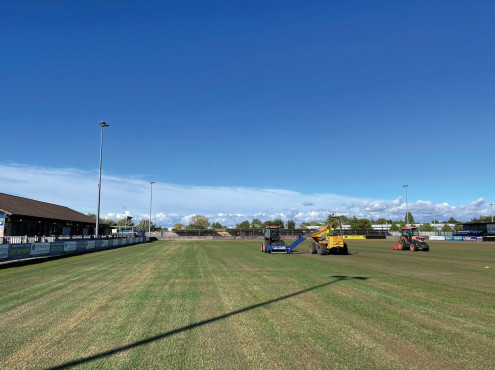 "This year, after renovation and the pitch has grown, we have steadily ramped up its use. Through July, it was just the first team games, and then in August, they also started to train here. Now the under 21s and 18s have started to come back, so it will be a full hit again by the time we get to September."

I asked Dave how he has learned to cope with an excessive amount of use on the pitch. "It has not been too bad. It's different from what I have been used to in the past, but I found last season that the main goal was to keep the surface as clean as possible. We do not want the carpet to get clogged up and the water filtration rate to start slowing down, bringing us problems we could do without in winter. Being a pilot study, everyone involved with the pitch is constantly learning; myself, the club and the contractors who come into work on it."

I was interested in knowing why the Horizon carpet was installed from FlexGrass based in Italy, rather than some of the more tried and tested hybrid carpets around the country.

"Runcorn Linnets FC is running on the same Football Foundation programme like us, but they are on a Hero system like the one installed at Man City's CFA training ground. As far as I'm aware, we are the only club in the country using the Horizon Hybrid system. In all honesty, I do not know why the decision was made to use the FlexGrass carpet, but it has been great for us so far."

"In my time as a groundsman, I have worked with Desso and Fibresand pitches but not a hybrid carpet." 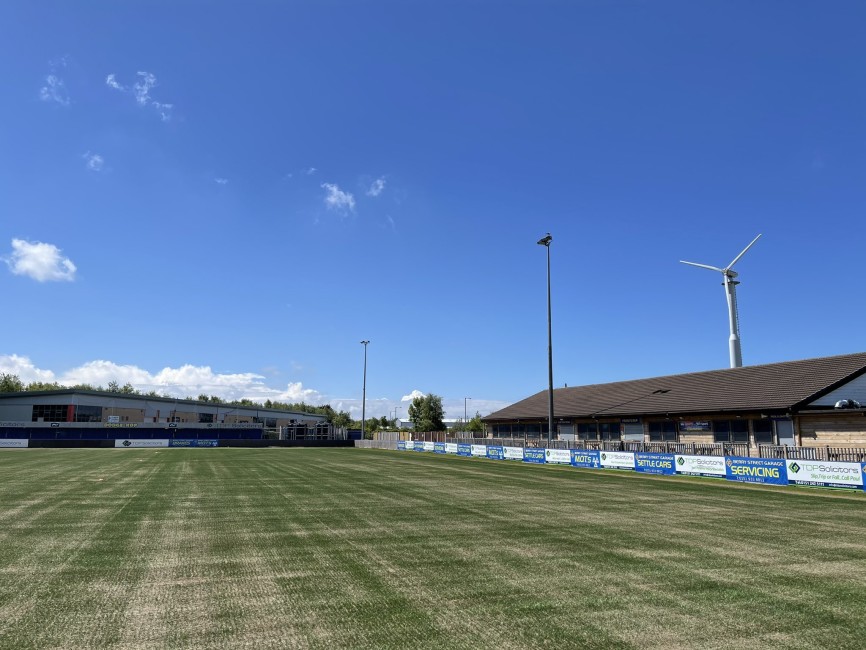 I asked Dave if there are any special techniques or considerations to keep in mind when working on the surface? "When we aerate the pitch using the ProCore and Verti-Drain, we have to use pencil tines. What I found different from working on a Fibresand or soil-based pitches is that I can't emphasise enough how crucial it is to keep the surface as clean as possible. Another thing I have done differently is that we now have grooming cassettes, and we also invested in a rotary mower last year to help with the clean-ups after the games and training sessions."

Dave takes a keen interest in how other clubs look after their various hybrid surfaces and is not afraid to ask his fellow groundsmen for advice. "I found it helpful working at Man City on matchdays, and the great thing about working there is that there are so many people around you from all different parts of the industry. So, even when you are divoting after games, you get the opportunity to speak to like-minded people about different things and you are constantly learning. Being young and in this position, it is good to surround yourself with good people you can talk to and pick up the phone, which has helped me out massively."

"I'm also grateful for the help and advice I get from Phil Collinson at ICL. He has provided our nutrition programme for the last two seasons. Since renovations, he has called in a few times to offer me advice and I constantly keep in touch. As we all know, it's good to have a plan in place, but things are continually changing, like the weather and how the pitch is reacting. He's always there to speak to and it is good to have that relationship." 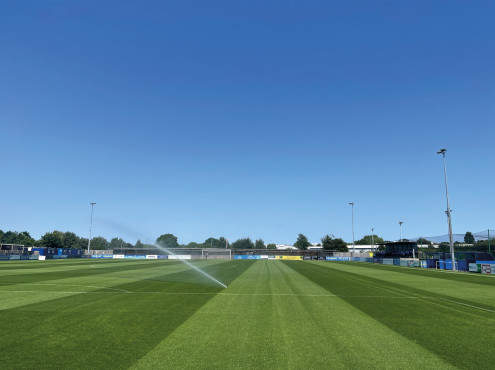 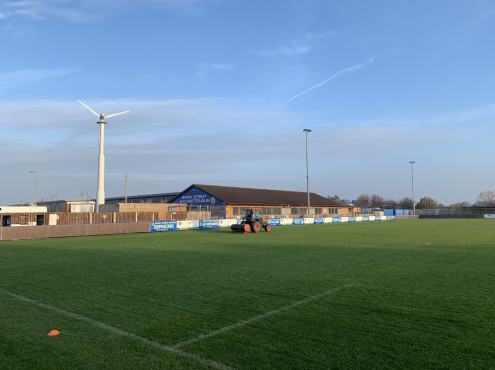 The club has wisely invested in frost covers and germination sheets, but it's a struggle for Dave to take advantage of them. "When your pitch is used the amount it is. trying to get grass seed to germinate is challenging anyway, so trying to get the time to get a sheet down for a few days is virtually impossible. Last year, I took full opportunity to use the germination sheets when the club was forced to close due to people having to self-isolate, but we just won't get a break this year. The frost covers only cover a quarter of the pitch, which we use to protect a small, shaded area at the bottom of one of our goals and then we hope for the best overnight. We are not too far from the coast; we tend not to get many deep penetrating frosts."

Dave talks me through what maintenance he is able to carry out throughout the week, whilst being mindful of training and fixtures. "On a weekend, we could have two games on a Saturday and three games on a Sunday. So, on a Monday, I come in, do as much divoting as possible, then rotary mow the pitch to try and pick up any loose debris that has been left over the weekend. Through the week, it is a matter of trying to keep on top of the cutting. On average, I will cut with the Dennis G860 at a height of 32mm to help keep as much grass cover as possible. As well as this, I will have to prep the pitch for any games that are scheduled throughout the week. I'm constantly swapping the verti-cut, brush and cylinder cassettes around in the G860 to mix things up and do things differently." "Another thing I have found is that, after September, the pitch starts to lie flat and we do not get as much bounce back because of the weather and so many people playing on it. Sometimes, you have to make the decision that it is best to stay off it rather than go on for the sake of it, as it's not actually helping the pitch at all."

With grass being left so long, especially in the growing season, I asked Dave does the first team understand why you have to keep the pitch long? "The first team are alright with it and are well aware that there is a business model in place as a club. It is not just about one team and we have to do our best to protect the pitch to give everybody who uses it the best experience possible. Having the irrigation system helps as we can put the sprinklers on before the game which quickens up the surface for the first team a little bit."

"Last year, we had the pitch verti-drained seven times because what we found, working with PSD, was the clegg hammer results do shoot up pretty quickly. There were times when we hit the one twenties, so we had to bring those readings down. It worked out we had to get it verti-drained every six weeks. This was carried out by Mallinsons and was covered in the funding. This year, we are on our own, but we plan to stick to those guidelines as it is essential to the maintenance of the pitch."

Whilst talking with Dave, I can't help feel that I would get quite frustrated not carrying out specific maintenance tasks when I thought it was required, if I were in his shoes.

"There is frustration because, as a groundsman, you always want to achieve the best results. But I enjoy the challenge and I like working here at the club as they are supportive and fantastic. At the same time, you have got to kind of accept the business model of the pitch and why it is here in the first place, and I have to do my best to adapt the way that I work to achieve the best results. I believe it is helping me to become a better and more rounded groundsman as it is intense and you are always having to think outside the box." 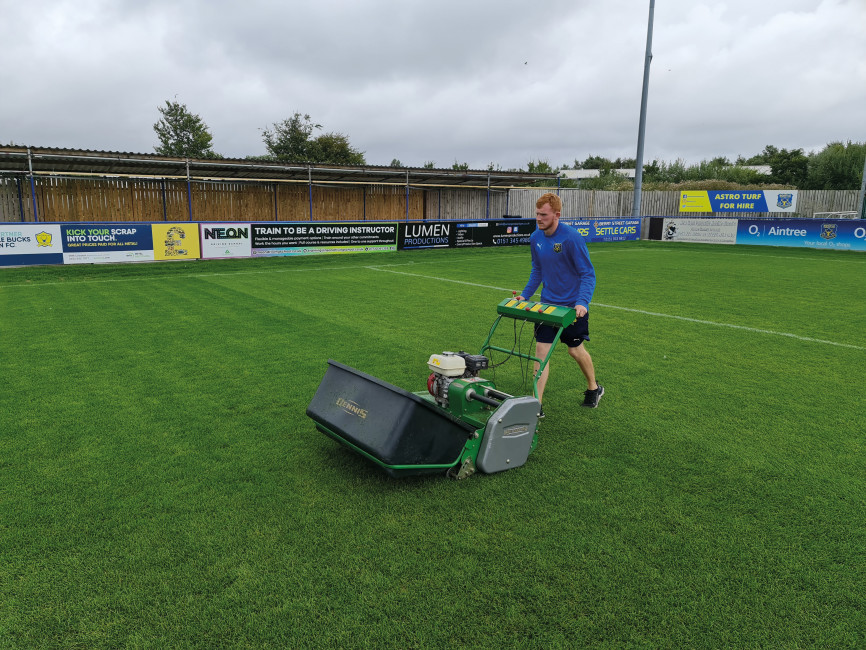 After leaving school, Dave went to college to study football coaching before turning his attention to the sports turf industry. "I have always had an interest in groundsmanship after watching TV or going to the games. I found it fascinating how well-presented football pitches were. This led me to start looking online and taking more interest in what went on, and I began to follow groundsmen on social media platforms. I then saw a job come at AFC Fylde for a part-time assistant groundsman working with Dan Bunce, the head groundsman at the time. I went there for eighteen months for three days a week and mainly looked after the training ground, but also helped Dan at the stadium. I was literally just cutting every day, but it was an excellent way to get into the industry."

"This whet my appetite for more and I joined Blackpool FC as an assistant groundsman working at the training ground and the stadium before I was made redundant after two years of service last summer. This left me in a problematic situation as we were in the midst of a pandemic. I knew this pitch was getting put in here and I spoke to the manager who I knew through football stuff to pick his brain. I then applied for the Head Groundsman job here in early August and started in September last year - and I'm still here now!"