0 Bradford City - Bantams wait is over!

"It's a great job when you are part of a winning team and you can see the rewards for all the hard work, both on and off the field"

Bradford City Football Club had a cracking 2012-13 season. The Division Two side reached the final of the League Cup and also won promotion, via the play-offs, to Division One, giving their loyal supporters two trips to Wembley. Sadly, for them, the League Cup headed off to Swansea, courtesy of a 5-0 defeat, but the club's achievement in reaching the final was the stuff of dreams, seeing off Premier League outfits Wigan Athletic, Arsenal and Aston Villa on the way.

Like their Yorkshire neighbours, Leeds United, Sheffield Wednesday and Sheffield United, they have experienced life in the Premiership, but have tumbled down the divisions in recent years and, for this footballing stronghold, it's been a bitter pill to swallow. So, Bradford's recent promotion, along with that of Hull City to the Premiership, may at least have cheered a section of the county's football community.

The club's 110 year history has been littered with highs and lows, from FA Cup winners in 1911 and playing in the Premiership in 2000-01, to various administrations and the tragedy of the fire disaster of 1985 which claimed the lives of fifty-six people and injured 265. There are poignant memorials around the ground and in the city centre and, to this day, the Bradford City strip is edged in black to act as a permanent reminder.

Mick Doyle is the club's Head Groundsman, a position he has held for the past six years, and one he says he couldn't turn down, being a lifelong supporter of the 'Bantams'.

He began his career as a parks apprentice on the city council in the 1980s, gaining his City & Guilds and going on to work for the parks department for fifteen years as a groundsman/gardener, before having to transfer as part of Compulsory Competitive Tendering (CCT) when he joined the council's appointed external contractor, Glendales, for a further fifteen years.

Meeting Mick, you instantly get a sense of pride for the job he does, and he took me on a quick tour of the Valley Parade stadium before we discussed the day to day maintenance of his pitch.

First stop, quite rightly, was to see the two memorials to those who died in the fire, before heading off to see the corporate suites, boardroom and The 1911 Club, a restaurant celebrating their FA Cup victory. We then went on to the Kop where we got a birds eye view of the ground.

Mick explained that, with no other full-time groundstaff to help him, it's mainly down to him to look after the pitch, although he can call on the stadium's general maintenance man when needed. He also has a couple of volunteers on match days to help put the portable goals out and erect the safety ball stop netting.

Whilst making our way down on to the pitch, Mick went on to explain that, like many lower league groundsmen, he has to work with limited resources combined with having to manage an old soil based pitch. It was originally laid on an ash base and has a large camber to help water run off the playing surface.

During the 1990s, as was the thinking at the time, it went through a phase of heavy sand dressings and amelioration of the top 100mm to improve drainage, resulting in a heavy and stodgy surface. Combined with the camber and normal wear an tear it meant that, come December, most of the centre of the pitch became devoid of grass cover.

With some reasoned arguments, Mick managed to convince the club to invest in Fibresand to help stabilise the pitch. Such were the club's finances at the time, work to the centre of the pitch only was undertaken and, although this worked very well, the following season it was the wing areas that were suffering from lack of grass cover!

It also made the pitch difficult to manage in terms of not having a consistent profile. Watering requirements were especially difficult, with the centre of the pitch requiring more water than the wings.

The club installed a pop up irrigation system on the perimeter of the pitch, but Mick still has to drag hoses and oscillating sprinklers onto the centre of the pitch which, he says, is not very practical for getting water on prior to games and at half time.

At some point he hopes the club will invest in more pop ups, but knows it is not worth doing anything until a decision has been made about any reconstruction of the pitch.

Working alone means that Mick can often be found at the ground at 6.30am, so that he can complete the day's tasks. On match days, he may start even earlier.

He generally mows the pitch every other day, but always on match days. During the summer months, he likes to try out new mowing patterns as it helps prevent a nap forming. It takes four hours to complete.

Height of cut is kept at 25mm during the summer, reverting back to 28-30mm during the playing season. A new Ransomes Mastiff nine bladed cylinder mower, supplied by Golf & Turf based in Wakefield, is supplemented by a rather old, but tried and trusted Dennis cassette mower for brushing and verticutting.

Linemarking is carried out using a transfer wheel marker when there is plenty of grass cover but, during the winter, Mick reverts to a spray jet marker.

Post match pitch repairs revolve around divoting, brushing to clean up surface debris and then mowing to encourage the grass to tiller.

This year, Mick has managed to persuade the club to invest in a new Iseki TH4335 compact tractor, a Sisis Aer-aid Javelin aerator and Sisis Twinplay units which, in the short time he's been using them, "has made a hell of difference to the pitch".

As for his feeding regime, the club have agreed to invest in this too. In the past, Mick says, it was a case of chucking on some cheap high N granular which, over time, led to some problems with black layer.

Mick has now had the pitch analysed and been provided with a more specific organic fertiliser programme so, along with the ability to aerate on a regular basis, he is expecting to see the pitch improve further.

At the time of my visit - the day before the play-off final in mid May -Mick was also considering doing all of this year's end of season renovations himself, hiring in a seeder, scarifier and topdresser to complete the work. This will include mowing the pitch to about 3mm, scarifying in three directions, aerating, topdressing with sixty tonnes of Rufford sand and seeding with 'several' bags of Johnsons Premier Pitch, saving some for oversowing later in the year.

Getting machinery into the ground can be difficult due to the lack of available access space - there is only one access point via a very narrow road that is restricted further by a floodlight pylon. Mick says that it requires a bit of planning and also getting permission from the council to partially obstruct the road during deliveries. It certainly makes life interesting.

The club are palnning to use the nearby Woodhouse Grove School grounds as a training base, which will give them the opportunity to train on their new 4G artificial pitch as well as their natural pitches. The school's head groundsman, Simon Wood, is very keen to work with the club as he sees the benefits of sharing resources.

Mick has acquired some artificial turf, left over from the Woodhouse installation, that will be laid along the linesmen's runs and on the corners of the pitch. This will help reduce damage to the runs and make it look more aesthetically pleasing.

As for a wish list, Mick would love to see the club invest in undersoil heating. The biggest bane of his life is moving frost covers on and off the pitch, especially when there's only him and the maintenance man to do it; and there's fifty-four covers to move!

Last winter, the first use of the covers was on 28th November and the last on 9th April. In total, the pitch was covered for thirty-five days, including one continuous spell of twelve days.

The amount of work involved in trying to keep matches on during the depths of a bad winter is immeasurable, especially with limited resources. Mick is not one for moaning, but he wishes that people had a better understanding of what groundsmen have to do to keep matches on, especially at lower league levels.

However he would not swap his job and, being a lifelong supporter, has enjoyed the successes of the 2012-13 season immensely. It's a great job when you are part of a winning team and you can see the rewards for all the hard work, both on and off the field.

On both Wembley visits, 25,000 Bantams fans made the trip to the capital, so the fan base is there for the club to reap the benefits of continued success which, in turn, would enable further investment in the pitch.

Mick is confident that, as the song says, things can only get better, and the recent investment in new machinery has certainly been a step in the right direction. 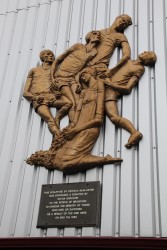 Saturday 11th May 1985 was a tragic day in Bradford City's history when fire broke out in the main stand, an old wooden construction, killing 56 and injuring at least 265. The flames quickly took hold and eye witnesses likened it to a fireball.

The game, against Lincoln City, was the final match of the 1984-85 season, and was due to be a celebratory affair in which the team were to be presented with the Division Three championship trophy. Dignitaries from the city's twin towns, plus Bradford officials were in attendance, and they all watched in horror as the fire destroyed the main stand in just nine minutes.

At Valley Parade there are now two memorials. One is a sculpture by Patricia McAllister and donated by Sylvia Graucob, a former resident of West Yorkshire, which has now been now re-situated at that end of the stand where the fire began.

The other, situated by the main entrance, was donated by the club after its £7,500,000 renovation of the original main stand in 2002. It has a black marble fascia on which the names and ages of those that died are inscribed in gold, and a black marble platform on which people can leave flowers and mementos.

The tragic events began the introduction of many sweeping changes to health and safety regulations at football stadiums across the UK, with the Hillsborough disaster a few years later instigating further measures.

Immediately after the fire, Valley Parade went through a series of redevelopments, with the club spending £2.6 million building a new main stand and improving the Kop. The new ground reopened on 14th December 1986 with an exhibition match against an England International XI.

Further improvements over the years have taken the capacity up to 25,136.