0 Breath of fresh aeration from the new Air2G2 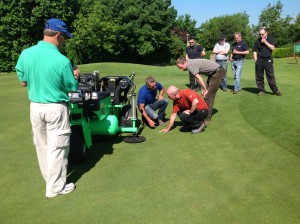 New to the UK and European market is the Air2G2 Injection Aerator introduced by Campey Turf Care Systems based in Macclesfield, Cheshire.

The first one in the UK has been purchased by Fine Turf Services, a Specialist Sports Turf Contractor based in Knutsford, in the same county.

This machine has caused quite a stir in the fine sportsturf maintenance industry and we asked Richard Campey why the Air2G2 is having such an impact.

"When comparing with other methods of aeration in action," he said, "it is interesting to consider the original concept behind aerating the soil and remind ourselves what those first objectives were and how we have 'muddied the waters' since."

"One of the first methods employed to try and aerate, and relieve compaction, dates back to the days when men with pitch forks would stab the greens moving the forks back and forth.

"The objective was not so much poking holes in the ground expecting air to rush into the said holes, but rather attempting to loosen the soil so that the air molecules could move more freely through the soil.

"When the ground gets compacted the air stops moving and the crucial thing to remember:-

Richard explains that the modern idea of 'coring' or 'core perforation' as it ought to be called, is no more likely to achieve air getting into these holes as the earlier way using a pitch fork. It does, however, precipitate loosening of the soil allowing the air molecules to move and for freshly displaced soil to fill the holes.

The purpose of all types of aeration should be to increase air movement within and throughout the soil profile and choosing the right equipment to achieve that aim is the key to accomplishing that goal.

"The Air2G2 is designed to aerate deep into the soil by injecting air at a depth of 10 to 12 inches, fracturing the ground horizontally and forcing the air upward to de-compact the soil around the root zone," says Richard.

"It is extremely effective at doing this. More importantly it is an excellent form of total aeration for golf greens and other fine turf area especially during the summer months, as there is no disruption to the playing surface whatsoever."

"The result is a healthy root zone, excellent microbial activity to encourage root growth, and a reduction in fungi and bacteria."
Glen Black the President of GT Air Inject Inc. who manufacture the Air2G2, sums up his thoughts. "It's about understanding and going back to the basic principles of what is the purpose of aeration.

'Air is everything to anything that lives."
Over the years I believe it's been so confused by agronomists, big equipment dealers and chemical companies that they either don't know or have forgotten." e Superintendent at Shorehaven Golf Club, E. Norwalk, Connecticut, and clearly understands these principles. He has used the Air 2G2 extensively on his course over the early summer months.

He is so impressed with the results that he says "It is the most innovative technology that golf course business has seen in years. The Air2G2 machine gives turf managers the ability to effectively provide air into the root zone and improve drainage without causing surface disruption.

"The three probes extend past the depth of a cup cutter. I will be excited when the roots of the turf begin chasing the 12" openings, after all roots grow in air space not the soil.

"I highly recommend the Air2G2 machine to any turf manager looking to improve conditions with no disruption to play and absolutely no clean-up after the operation. The machine was used for on all of the greens on the course without one member noticing the holes on the greens after the air induction into the soil profile.

"Our plan at Shorehaven is to complete all greens, collars and approaches four times annually on a rotation. We will begin to work on improving the drainage in low-lying areas in fairways and relieve the compaction from carts exiting the cart paths as well."

Will Kidd, managing director of sportsturf contractors Fine Turf Services, is the first in the UK to add the Air 2G2 to his contracting services. He is delighted with the performance of his latest acquisition. "After seeing a demonstration and marvelling at the depth and breadth of the injected air, with no surface disruption whatsoever, it made perfect sense to buy the machine. We have used the Air2G2 on greens with fantastic results already".

"We offer all types of sports turf maintenance and renovation services for both natural grass and synthetic surfaces." said Will. "The Air 2G2 will play a vital additional role in the aeration programme of greens and other fine turf sports areas." 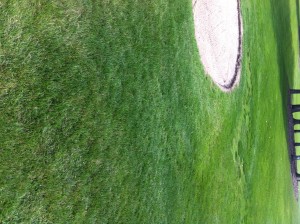 Martin Durham, head greenkeeper of Harwood Golf Club says the Air 2G2 is a fantastic machine. He used one on the barren ground between the bunkers as an experiment and the results were amazing.

"It has gone from a brown, dried up patch of land to one of the lushest, greenest parts of the course in less than three weeks. I intend to treat all my greens over the coming months, starting with the ones that traditionally hold the water."

The machine is also available in Europe and has been successfully demonstrated by Campey Turf Care Systems in Germany, France, most recently in Finland and Denmark.

Campeys is one of Europe's largest independent grounds care machinery suppliers and over the years has earned a reputation for offering practical advice and superb aftercare service.

The company also acts as a new equipment dealer for some of the most internationally-renowned grounds care machinery manufacturers including Dakota, Imants, Koro, Raycam, Vredo and Omarv.

Alongside a thriving new and used machinery business runs a subsidiary company, Tines Direct, which supplies replacement tines, blades and replacement parts for a wide range of turf care machinery.