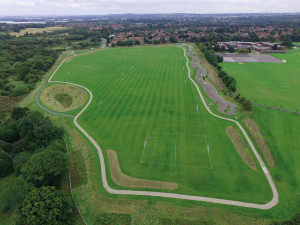 When the Cameron government scrapped the multi-billion pound 'Building Schools for the Future' programme, Wolverhampton lost vital school and community sports provision. Eager to redress the balance, the city council soon launched a strategy to meet the unmet demand that pitch closures and school relocation had created.

After working hard to attract cash to fund new natural and synthetic pitches, Wolverhampton can claim bragging rights to enabling some of the most extensive and advanced playing surfaces available.

At Barnhurst Lane, Pendeford, no fewer than nine pitches have sprung out of wasteland once grazed by cattle, skirted by a running track featuring several murals, recalling local heritage and history, embedded in the surface, and a 1km public footpath.

Extensive hard and soft landscaping and aquatic marginals characterise the perimeter. Wildflower areas were seeded along the site surroundings, creating a dramatic drift of intense yellow in summer and selected to encourage biodiversity.

Rustic, robust architectural fencing elements line the new car park opposite Aldersley High School, poised to assume management of the site under an agreement with Wolverhampton council, whilst imposing, characterful sandstone hewn blocks add texture, interest and drama to contrast with the vastness of the sporting space. 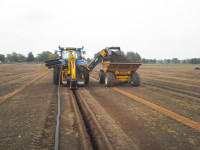 The car park drains away to soakaways connecting with a drainage network that includes controlled outflow from Barnhurst Lane's pitches to the River Penk, which bounds the site at its lower end, moving through the balancing ponds created under the complex scheme.

Concurrent with the Barnhurst Lane development has arisen a 3G school and community playing surface at nearby Our Lady and St Chad Catholic Academy, officially unveiled on the same day.

Already opened and actively promoted locally, the facility attracts a spread of user groups, with nearly 2,500 sports participants of both sexes - including the disabled - already thronging the Charter standard playing surface, such is demand. Of those, some six in ten are youngsters, school assistant principal Pasquale Senese calculates.

The provision stages Wolves close-kicking programmes that alone attract seventy young hopefuls each session. Pasquale has made good use of his contact with the EFL Championship club - he worked in their community programme before moving to the academy to head up sports development.

"Our full-size football pitch is UEFA certified and is one of the largest of its kind in the region," he explains. "We even host walking football here, which is great. This would be an ideal lacrosse centre too." 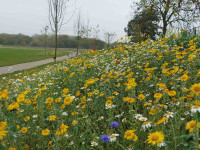 Both projects, totalling £2.2m, were supported by cash from the council, the Football Foundation (£578,000 from the Premier League and The FA Facilities Fund) and Sport England, in response to identified need across the city.

Younger age groups are expected to take full advantage of the new provision, an FA spokesman said at the official opening day in late September. "The natural and synthetic pitches are a game-changer for the region," he said, "and are designed to satisfy strong demand for five, seven and eleven-a-side football, as well as mini soccer, reflecting the results of the recent Youth Review."

Although there had been a "drop-off" in participation by older age groups, he added, mini versions of the game were "particularly strong" regionally, as well as traditional forms of the game.

The Active People and Places movement in the city has also hailed the developments. "The impact on health and wellbeing is so important," commented a council spokesperson.

Wolverhampton North East MP, Emma Reynolds, who performed the ribbon-cutting ceremonies for both sites, grew up near Pendeford and openly admired the scale of achievement of the Barnhurst Lane project. 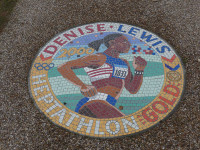 "I've learnt much today about the collaborative efforts to create this much-needed improvement in sporting provision," she said. "It's very impressive to see this many pitches on one site. I had often thought it a shame that such a wonderful space was not used."

Both sites would offer young people the opportunity to find the sport that was right for them, she continued. "The power of sport to transform and motivate is quite apparent and both these facilities really add value to the schools and local community."

All three divisions of specialist sports contractor Cleveland Land Services (CLS) united in the Herculean project to create arguably one of the most extensive new community natural turf facilities in Britain.

Under a competitive tendering process, CLS presented the most competitive quality/cost ratio, notes landscape architect David Purdie, who is based in the council's public realm department.

"The contractor's experience in constructing grass pitches was a key factor in the final analysis," he adds. "They have the heavy equipment and machinery to create a grass sports pitch, as well as extensive surveying and construction know-how." 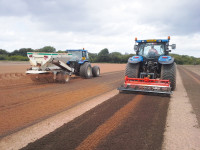 First, CLS Selfdrive heavy plant and equipment moved on to the former waste treatment works - ready for their landscape and earthworks team to shift some 65,000m3 of soil and rubble in six weeks.

After the area had been levelled, cut and filled and recontoured, CLS Sports installed a comprehensive drainage network to prepare the way for sowing a vast swathe of ryegrass seed.

The company brought in the £1.65m Barnhurst Lane project on schedule and budget, helped by the contractor taking advantage of the clay-based soil substrate to line a balancing pond, planned under the overall scheme, instead of buying in bentonite concrete-based material for the task.

The contractor undertook the work for Wolverhampton City Council, collaborating at every stage with the landscape architect team and consultant agronomist Noel MacKenzie to design environmental measures, including dipping ponds, planted areas, landscaping and a turfcare strategy.

The scale of the project could have seemed overpowering with large heaps of spoil and earth movement underway but project management and a competent contractor won the day.

Original reused tropical hardwood railway sleepers were specified by the contractor for the ponds' pedestrian platforms, allowing visitors to linger over tranquil water planted with false bulrushes and other aquatic varieties. 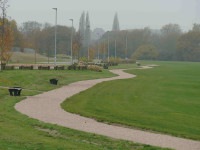 The extensive drainage includes a primary system of lateral drains channelling water to the balancing pond before it spills into a local stream. CLS overlaid secondary drainage at ninety degrees to the primary system to complete a comprehensive solution to help ensure optimum community involvement.

"Barnhurst Lane was a great opportunity to bring our three divisions together with their separate capabilities," said CLS Managing Director John Miller, "allowing us to collaborate on what proved a most satisfying project to create much-needed sports provision for the local community."

"The project proved a fitting example of CLS functioning as a one-stop organisation able to programme and complete a large, complex undertaking such as this, which not only hit budget and came in on time, but also proved value for money for the client. We were able to save them money on certain aspects, which allowed them to spend it elsewhere in the project."

Barnhurst Lane had brought together several specialists to great effect, Purdie maintained. "We've created a major new school and community sports facility that impacts minimally on the environment, is built to high standards and includes sustainable drainage systems (SUDS). Teamwork at its best." 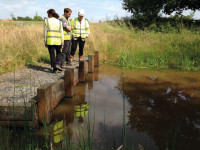 Wolverhampton City Council engaged Noel MacKenzie of Sports Turf Consulting Ltd in 2011 to aid provision of sports pitches on an area of land north of the city.

Formerly a sewage treatment plant, the 10.5 hectare site had been subject to other site excavations and manipulations before the natural vegetation regeneration, such as goat willow, hawthorn scrub and long grasses, had begun to take over.

The site was also pockmarked with shallow bedrock and post-glacial river pebbles and small boulders, along with post-industrial artefacts such as brick and ironwork fragments.

Sports Turf Consulting Ltd was engaged to complete a feasibility study, design layout, specification and construction administration role to tackle the challenges of the post-industrial infrastructure and bedrock and formulate a plan for the pitches that prepared the way for creating a sportsground.

The scheme required a cut and fill, with much of the post-industrial material buried on site, disposed of in landfill or recycled.

Noel worked with the council to develop the pitch layout and a drainage balancing scheme to avoid hydrological surges in the river running along the site perimeter.

Following landscaping design and layout revisions, CLS took possession of the site under the direction of project manager Stephen Miller. 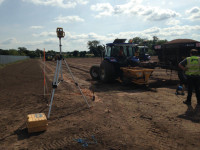 Work began to set working levels and completed layout, followed by lifting debris before topsoil stripping and stockpiling could begin.

"With topsoil stacked and stored, cut and fill of some 23,000m3 started, with lower parts of the site receiving inert debris and subsoil from cut areas. This was laid and consolidated to the appropriate levels by tracked bulldozer."

"Shallow bedrock caused minor upheavals in places, such as in the car park excavations at the top of the site, where cut was most severe. Drainage trenching encountered sandstone bedrock, but cutting teeth made short work of the soft material."

Shortly after, CLS relaid 200mm of topsoil over the whole site, whilst the cut and fill operation proceeded - the contractor allowing for installation of pipe drainage and backfilling.

"There was no excess spoil to remove, except for that caused by modifications to the landscaping work," adds Noel. "Afterwards, the site was ripped to relieve subsoil compaction and aid keying-in of the two soils' interface." 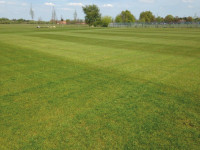 With soils back in place and cultivated, stone management took over using a Kerpy stone crusher, with several passes necessary to achieve the desired result.

The contractor laid main/carrier drains, formed drainage outlets and balancing ponds and creating wildlife ponds as well. "The spillway was designed to help oxygenate water leaving the drainage network as it entered the balancing pond," Noel explains, "which is intended to cope with major rainfall of greater than 1:100 year frequency, with a lower level flow-rate regulated outlet and a higher outlet to prevent overtopping of the system. In this way, outflows to the brook nearby are buffered, reducing hydrological surge from the site."

After installation of topsoil and lateral drains, sand amelioration at the surface followed, then cultivation and seeding. "Germination and establishment occurred quickly," explained Noel, "due to the species blend we selected and the timing of the process."

"The grass responded well to our optimised post-construction maintenance plan, rapidly stabilising the surface and filling in over drain lines."
Barnhurst Lane was given the chance to establish before CLS introduced secondary drainage using their Top Drain machine to cut sand grooves. "As the site was already fully cut and filled, excavated soil was taken under appropriate licensing for topsoiling required at another location."

"Today, Barnhurst Lane appears as though it has always been here," concludes Noel. "The turf is full in coverage and maturing nicely. It's time for schools and community to take full advantage of this much-needed sporting provision."