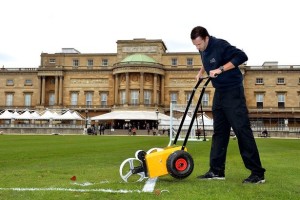 What a perfect spot for a throne in - the Wembley groundsmen mark out a football pitch at Buckingham Palace.

The players may also find themselves running across patches of camomile as the garden features the plant - a remnant of a previous era.

The Queen gave her permission for the match next month and Wembley Stadium grounds manager Tony Stones is working with the royal household gardeners, led by Mark Lane, to create a pitch in the 39-acre garden.

Mr Lane, the palace's gardens manager, said: "When I first heard about it I thought it was quite an exciting prospect, this is something we've never hosted before.

"There's been a boxing match back in the mid-1950s but a football match is quite a unique opportunity to use the garden for a different event."

The lawn has already been seeded in parts to repair wear and tear following a busy summer of activities from garden parties to staging the Coronation Festival.

And as Mr Stones's team began marking out the 100-metre by 60-metre pitch with tape measures and string, palace gardeners pumped air under pressure into a compacted area in the middle to force the ground back up - a normal practice at major grounds.

The Wembley grounds manager said: "This will be fine to play football on, it's in good shape.

"We're quite busy back at the stadium so we're getting it all marked out so when we come on the day we can just mark it out again."

Mr Stones, 37, from Barnsley, said his team remained focused whatever the event: "We treat every game the same so everything gets 100% care, whether it's a company day, a game at Buckingham Palace or the Champions League final."

The Duke of Cambridge, president of the FA, helped arrange the Southern Amateur League fixture on October 7 between Civil Service FC and Polytechnic FC, both based in Chiswick, west London.

Civil Service FC is the sole surviving club from the 11 clubs who founded the FA in the Freemasons' Tavern, Great Queen Street, in London in 1863 and later drafted the 13 original laws of association football. Polytechnic FC was formed in 1875.

William will host the event and also present medals to 150 grassroots volunteers in recognition of their dedication to the sport.

The match is being held in tribute to their commitment.