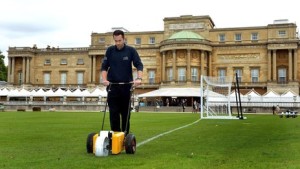 The competitive fixture involving two amateur sides was the idea of the Duke of Cambridge, President of the FA.

The Queen gave permission for the Southern Amateur League fixture to take place.

The Queen's backyard has been used to stage concerts, a trade fair and two boxing matches - one in the 1950s and one in 1873 when the Shah of Persia was resident in the palace and given, it is said, to slaughtering sheep in his guest quarters.

The lawn was mown with criss-cross strips like at Wembley.

And on this royal turf played two amateur sides: Civil Service FC - the sole survivor of the eleven teams that formed the FA in 1863 - and Polytechnic FC, who were formed, according to their records, in 1875 to teach the ragamuffins the club attracted how to become respected young men.

Once the final whistle was blown, work began to ensure the match lives on in the memory rather than leaving a lasting impression on a vast private lawn more used to hosting annual garden parties and where the Queen regularly walks her corgis.