The species scooped more than 40% of the votes, easily beating closest contenders the seven spot ladybird and emperor dragonfly 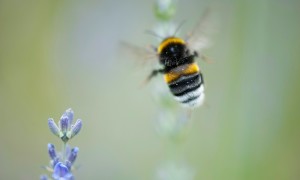 It's official: the buff-tailed bumblebee is the nation's favourite creepy crawlie, according to a nationwide poll.

In the end, the winner came in head and wings above the rest, with 40.5% of the vote. The seven spot ladybird was in second place with 15% of the vote, with the emperor dragonfly a close third with a 14.5% share.

More than 7,500 people from across the UK placed their vote in the ballot organised by the Royal Society of Biology (RSB).

Entomologist and RSB member Dr Rebecca Nesbit, who helped to organise the poll, put the bee's popularity down to its hard work, visibility and gentle sound: "Wasps interrupt your picnic, but there is something quite appealing about sitting in your garden and seeing a bumblebee hard at work. It's very noticeable in gardens and people are more aware of the valuable role bees play for us and the challenges they face at the moment," she told the Guardian.

The buff-tailed bumblebee is the first you are likely to see in your garden in summer and one of eight common bumblebee species in the UK, distinct from honeybees which are generally managed domestically.

However, despite housing a bumblebee colony in her own kitchen, Nesbit confessed: "I don't know if I should admit this but I voted for the ant - they have an incredible social structure." But the black garden ant attracted only 2% of the vote, coming in ninth.

The RSB launched the competition to raise the profile of the insect population which is suffering from the impacts of climate change, use of pesticides and loss of habitats.

"When lots of people think of conservation they think of pandas and the large species that need our help, but there are lots of people who do understand how important insects are for our lives. Many crops and wild flowers alike depend on bumblebees for pollination. They contribute to our economy, our countryside and the food we eat," said Nesbit.

The RSB, who will now "spend some time celebrating the buff-tailed bumblebee", are hoping people will get behind the victor by planting "bee-friendly" plants, avoiding mowing flowers until late summer and asking MPs to create a national programme to monitor numbers.

For the original article, visit www.theguardian.com.