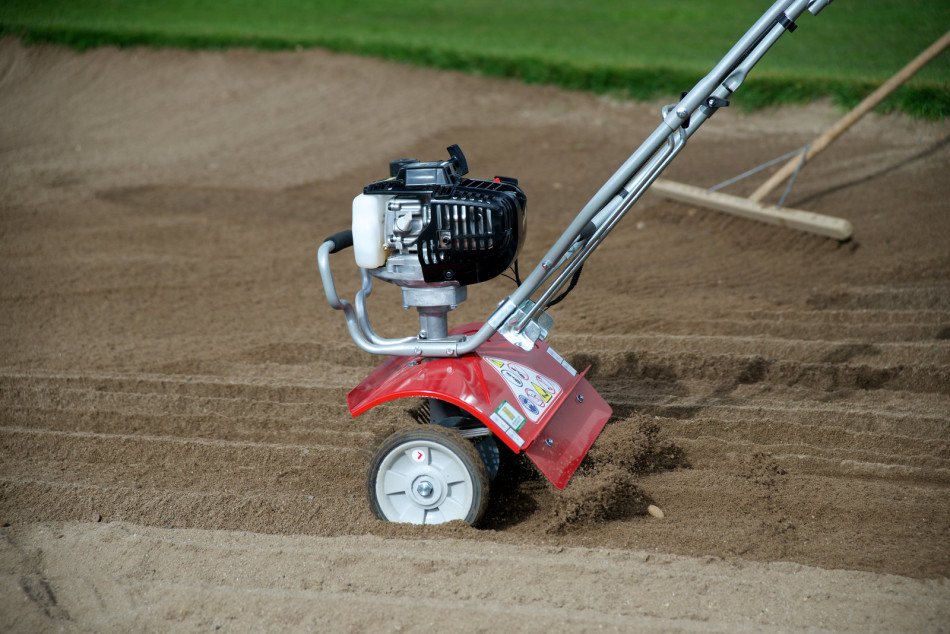 The bunker is all dressed and the preparation completed just before the competition and then down comes the rain. At this time of year, it can be anything from heavy showers to a hard, rain-driving storm and where does that leave you at the end of the day? With a bunker that needs a lot of work.

One of the most useful tools for the golf course and greenkeepers is the BunkerMaster. Light in weight, and easy to carry around in a buggy or ATV, it's the ideal solution for dressing a bunker in about a quarter of the time it takes with conventional tools. Those greenkeepers who use one swear by it. Even if bunker preparation is last minute it pays to have a BunkerMaster handy for sand trap restoration, working tight edges and banks. It will also deal with thick moss, thatch, overgrown grass and ingrained sand. The BunkerMaster aerates the top 36mm/1½" of sand but never aggressively digs in and it's designed to work away from the operator for maximum control.

So you have a fast route after the rains to getting the bunker back into shape and ready for play. You have a choice of powerful commercial grade engines in the 4-stroke Honda 25cc or Subaru 35cc, and a powertrain that's virtually indestructible. The speed and efficiency of the BunkerMaster translates into less effort required by staff and an improvement in productivity. Set that alongside the low initial outlay for the machine and it soon becomes clear there is a real financial benefit. While bunkers cover approximately only one or two percent of the course their upkeep can take as much as twenty-five percent of the greenkeeper's resources.

There is no doubt the BunkerMaster will give you a fast return on your investment and make considerable savings in the long-term. It also comes with a five-year warranty in commercial use, which is an added benefit for additional peace of mind.