0 Busy time at the Priory 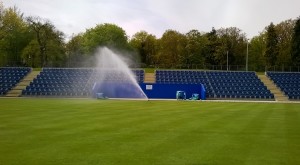 As the Aegon Classic at the Edgbaston Priory Club looms ever closer, attention to the venue's eight grass tennis courts intensifies.

Picture right - The dry April has meant that our irrigation system has had to come in to use much earlier than expected!

April has been a challenging month, but not in the usual sense! Normally, the term April showers rings true and much of our work is carried out in between bouts of rather a lot of rain. In our part of the country, we normally average around 62mm of rain in April.

However, this year we have seen only 17mm, which has contributed to 18 dry days, including 12 consecutive in the later part of the month. This unusual, if mostly welcome, unseasonable weather has certainly provided us with some rather different challenges.

At the club we are fortunate enough to have four American Clay courts which are extremely popular with the members, as well as our High Performance players. These courts do though suffer through their age in periods of dry weather. They are ideally irrigated using a cell based sub-surface system. However over time this system has become clogged in areas, and whilst repairing it would yield major benefits, this is not practical as it would require the courts to be dug up.

This has meant we have had to begin overhead hand watering in order to keep the courts in top condition. Of course, as the summer rolls around, this could translate into overnight work, not uncommon for us at this time of year, in order for us to limit the downtime of the courts during playing hours.

Avid followers of our work, through our posting on Twitter (we can be found at @EPCGroundsTeam), will also know that through late winter and early spring, we were carrying out the task of planting the best part of forty semi mature trees around the grounds. This has been a hugely satisfying undertaking, particularly as the trees are now starting to produce flowers and leaves.

The warm and dry weather, however, is again leading to more watering for the team - yes, there is no ideal weather for a Groundsperson these days! At the minute, a couple of good soaks a week is keeping the trees in good health, however we are in the unique position of needing it dry for tennis, but with some very localised showers around the grounds for our trees!

Of course, the matter most pressing for us currently is the state of the club's eight championship standard grass tennis courts. Mowing frequencies have increased, with us mowing three times a week by the end of April. We have also been able to be verti-cutting regularly (around every ten days currently) which has yielded some positive improvements already.

Additionally to this, we have been able to continue our regular spraying programme, combining feeds with other plant health products, in order to ensure the sward remains as healthy as possible, and also retaining aesthetic characteristics befitting of the surrounding environment.
Overall though, we are in a good position, having come off the back of a good autumn renovation, and despite the challenges winter threw at us we have been able to maintain this going in to spring.

Whilst some years an intense spring renovation is required to get courts up to speed, we have been lucky this year that our spring renovations have been more about trying to fine tune any minor imperfections. Much of this work was carried out in March, and the initial view has been that courts have benefited greatly from this. 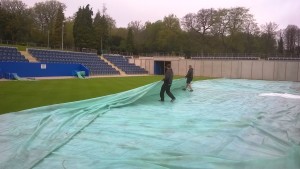 However, being perfectionists means we've been out with the seed again! All baselines have been over seeded a second time and covered, whilst we've also been out with weasels and handfuls of seed to top up any minor bare patches. Hopefully, such a fine eye for detail will pay off when we are visited by some of the world's top female players come June. So far, we have seen some fantastic players announced, including;
ï'· Defending champion, former world no.1 and current world no.7 Ana Ivanovic; ï'· Current world no. 2 Simona Halep; ï'· Two time grand slam champion and former world no.1 Victoria Azarenka. With such a star studded line up due to visit us, we're fully aware that a lot of media attention will be on the Ann Jones Centre Court come Monday June 15th.

Picture left - Using the covers with such a small team is hard work - we're certainly looking forward to the temporary staff starting!

In order to help speed up seed germination on the court, we've been making use of the inflatable rain covers we have access to. These were expertly installed by the team from Stuart Canvas in early April, and have allowed us to 'Play God' with our climate ever since. Whilst the outside match courts and practice courts have so far not required this level of attention, our centre court, being a sunken court, has required a little bit of an extra boost through the spring. Being sunken means that the ground tends to sit a lot cooler and also presents a challenge with drainage. We also have problems with a lack of sunlight, particularly at the southern end of the court. 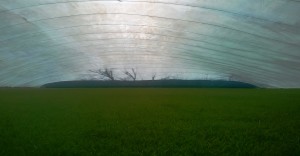 By pulling the rain cover on, and inflating though, we can create a temporary greenhouse over the court, which helps us to warm the surface up and allow the court to begin to catch up with the rest of our courts. This isn't an easy job; shifting such a large cover with such a small team is hard work; however, it is necessary in order that we can ensure the court plays as we expect it to.

Picture right - The view from underneath the inflated Ann Jones Centre Court cover. With the sun out, it makes a fantastic greenhouse.

Whilst we hope that the warm weather continues through May, we are starting to monitor surface hardness and moisture levels again to ensure the courts have the correct playing characteristics come June 15th. We've said before how we try to recreate a playing experience similar to that at The All England Club, and so ensuring the correct surface hardness is paramount to maintaining the right speed for the court. Of course, such warm dry weather means that the courts are now drying and firming much quicker than we would normally expect. 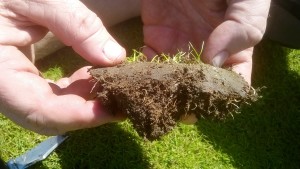 For example, we took Clegg Hammer readings of around 260 gravities off one court during late April, however for the tournament we would be aiming to be around 220 gravities. This means that if the dry weather continues, we will be leaning more and more heavily on our irrigation system to hold off and perhaps even slow the drying of the courts in the run up to the tournament.

Picture left - Despite all the scientific tools, there is still no substitute for getting on and seeing exactly what's going on in the soil profile.

Looking forward, May is always an exciting, if rather a busy month. The grass courts will require a fine eye now to ensure they continue to develop in the way in which we envisage. Mowing frequencies will most likely become almost daily by the end of the month. Nutrient inputs will increase and any minor imperfections, cosmetically, will need to be ironed out so that any additional seed has a chance to establish. By the end of the month, the court covers will be used every day on every court, and the first of our temporary court covering staff will have commenced employment in order to facilitate their operation.

Of course, whilst the grass court preparation becomes more and more of a priority, so does the overall presentation of the site. First impressions count for a lot, and while we try to keep the site as pristine as possible all year round, we know there will be extra pressure when the world's media, along with a large spectator base arrive with us. 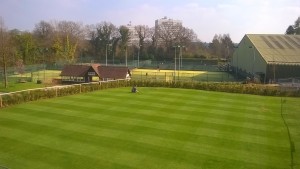 Ornamental areas have begun to receive a spring makeover, with beds being topped up with wood chip, ornamental lawns receiving feeds and increased numbers of cuts, bedding plants will start to be planted and even paths will be pressure washed to keep things looking as smart as possible.

Picture right - First impressions count - so even our ornamental lawns get striped in to try and give that little extra 'wow' factor.

We also had a demonstration of a CDA Sprayer, arranged through ALS's (www.amenity.co.uk) Mark Allen; it worked so well we have very quickly placed an order. This extra piece of equipment should help us to keep areas weed free, whilst keeping the job quick and simple. In fact, if last year is anything to go by we'll be leaning more and more on Mark and the team at ALS, as last minute jobs crop up and we need things in a hurry! We're very lucky to have a good working relationship there and, most importantly, one we can trust. 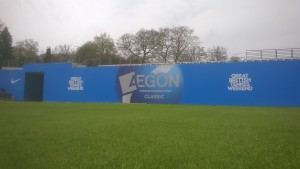 May will no doubt present more unique challenges, but that is why we got into this industry in the first place; no two days will be the same and that's what makes things interesting and keeps us on our toes, along with the lure of the visit of some of the world's top tennis players and the opportunity to show off our work in front of a world-wide television audience!