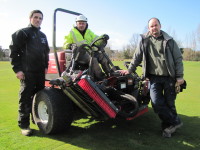 In the constant battle with the elements Caldy has more than its fair share of wind, rain and demanding members who have come to expect only the best surface with which to perfect their game!

Caldy Golf club's 18 hole golf course boasts spectacular views across the Dee estuary and beyond to the mountains of North Wales and provides a challenge to players of all abilities. Although records show that the course was opened in 1907, it was not until 1931 that the course became an 18 hole course designed by 5 times open champion James Braid.

Carl Crocher, Course Manager has the enviable position of manicuring the course and maintaining the greens, tees and fairways together with the assistance of his dedicated colleague Ian Farrrall- Head Greenkeeper and their team of six green keepers
including Dave the mechanic who doesn't seem happy unless he is at the Heftee, working on something not quite, but soon to be, broken.
Carl has been at the course for nine years during which time he has also been involved with the Gingerbreads who are a group of like minded individuals who are working with nature and constantly demonstrating improvements and sharing tips on course maintenance.

Caldy Golf club is host to the Ricoh women's British Open qualifier in September this year and Carl is keen to ensure that the course remains in pristine condition throughout the year with well defined fairways and firm, smooth greens. "We are always trying to raise the bar on the course and in the last 3 years we have embarked on a program to reduce thatch by coring, aerating and also top dressing fairways".

For the last 3 years the course has had 300 tonnes per annum of sand put onto the circa 4 hectare of fairway, in rotation, to improve the drainage which has extended the course life beyond the good summer appearance. This year they've bought their own Procore 1298 to increase the aeration frequency. 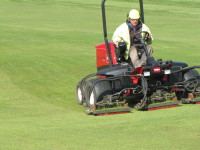 y the 3rd week in March, Greens were solid tined after vertidraining in February, & have had ca 40 tonnes of dressing applied.

Carl is always looking for opportunities to continually improve and upon reading an article on benefits of brushing fairways, the team at Caldy would previously drag a tractor unit around all 14 fairways and follow round with the fairway mower but this was taking nearly 6 hours and 2 people.

In Winter 2010 Carl heard about the turf brush system that was being demonstrated at the North Wales BIGGA event at Mold Golf club on their TORO 5610 fairway mower and whilst at the event Carl was impressed with the "brush & cut" that the turf brush system offered such that he contacted Crocodile Golf regarding a system for his TORO 5410 fairway mower which had smaller 5 inch cylinder.

After purchasing the fairway brush system for his TORO 5410 fairway in mower in June 2011, Carl has been impressed with the results that have been achieved which, combined with the dry conditions has enabled Carl Croacher to get the course ready a full 6 weeks ahead of this time last year with "stringy rye grass stragglers" being eliminated within the first two cuts and the "early season appearance is the best that it has ever been!"

An interesing development " A Brucey bonus" is that the "Yorkshire Fog"grass species has been dramatically reduced as it seems not to like the stiff brush treatment that it receives 2-3 times a week and again gives a consistent look across the fairways. "Paul, who cuts the fairways most of the time is a man of few words, but was like a kid in a sweetie shop when he saw the difference the brush makes. He literally ran, well walked quickly into the sheds beaming, "come & look at these" he said"

Although the course itself does not suffer from particularly heavy dew or worm cast areas along the estuary, the inland part of the course benefits from both dew removal and interestingly the cylinders are staying on cut longer as the worm casts that are present are being brushed away and are not being cut by the cylinders. This also prevents them being smeared across the surface for weed seeds to grow in.

The removal of the thatch layer on what is a relatively flat course has enabled the striping effect to be more defined and has remained longer than with cutting alone. The strip definition of this level is normally seen on undulating courses with elevated tees where you are looking at the surface as opposed to across it which is the case at Caldy.

The improved aesthetics of the course has not gone un-noticed by the members who noticed the difference immediately last summer as well as the improved definition and the way that the ball sits tighter to the surface. 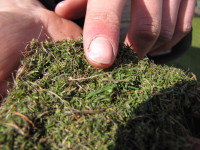 Not divulging all of his his secrets to the "lying in wait" Gingerbread's, Carl has admitted to the fact that he occasionally goes "off piste" with the fairway mower and tickles the approaches and tee boxes to enhance the appearance.

Carl is clearly one of the Gingerbreads that will not be having his head removed any time soon!

Both of the additional mowers have had their challenges with housing points, brush design and also space envelope being governing factors which have now been overcome.


The 3250D brush system has been recently fitted on to Houghwood GC, Royal St David's, Aberdovey and Carden Park with staggering results being reported by all clubs of the removal of dead thatch and improved surface definition which can be seen with the dead grass samples and longer grass species being stoood up for cut and collection