The Hampshire town of Aldershot is the 'Home of the British Army'. The garrison, plus a wider urban population of 243,000, ensures that the local football team regularly attracts crowds in excess of 4,000, one of the highest in the National League. Currently 'comfortably mid-table', the club's ambition to return to the EFL is aided by Head Groundsman James Smith. Lee Williams paid him a visit to find out more. 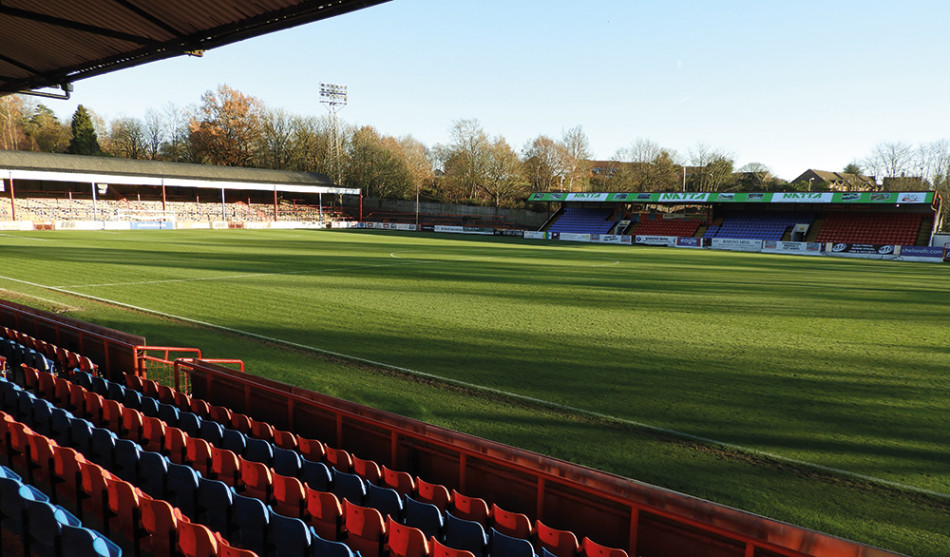 Aldershot Town Football Club was founded in the spring of 1992 after the closure of debt-ridden Fourth Division club Aldershot FC. They are now part of the Vanarama National League and play their home games at The Recreation Ground, which has a capacity of 7,100. It has been the home of football in the town since 1926 when it was previously used by Aldershot FC. The stadium's current sponsor, EBB Paper, gives the stadium the rather wordy official name of The EBB Stadium at The Recreation Ground; however, it is still affectionately known as 'The Rec'.

James Smith began his sports turf career as a greenkeeper at Wycombe Heights Golf Centre where he worked under course manager Colin Wilson, before he moved on to set up Turf Tonics with business partner Steve Gardner. "After leaving school, I joined Wycombe Heights as an assistant greenkeeper learning on the job. I was in no rush to gain my qualifications, and it was only in my fifth year at the golf club that I decided to do my NVQ Level 2 in sports turf. I also gained my spraying certificates PA1, 2 and 6. After six years at Wycombe heights, I was approached by Colin to join him at Turf Tonics and take up a position at Bisham Abbey National Sports Centre helping maintain the facilities, which included Desso, hybrid and 3G pitches. From there, I worked with Sean Woodley at Wycombe Wanderers for a while, before going to Aldershot Town to help Colin who showed me the ropes here for six months before he was due to have an operation. When Colin came back to work, I asked him if I could look after the pitch full-time and, luckily for me, he agreed and made me Head Groundsman twelve months ago." 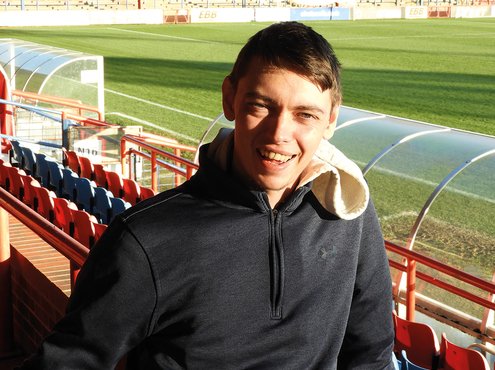 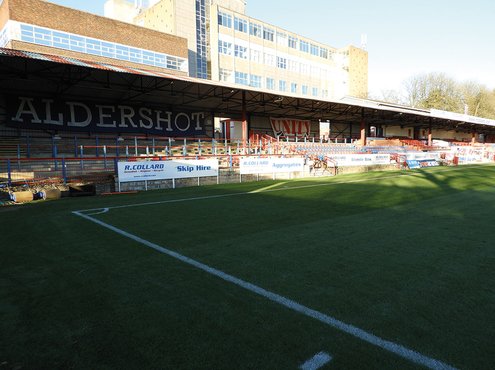 James is tasked with looking after the stadium pitch on a daily basis, which is a Fibresand construction with a full drainage system and an automatic irrigation system. "It's supposed to be Fibresand, but we have cleaned it off with the Koro year after year and, this year, there is not much left. It would be great if we could top it up sometime in the future to get the fibre content back to where it should be so we can achieve the optimum performance from the pitch."

"The pitch generally drains very well; there is only a small problem in one of the corners where there is a bit of a dip. We have a fully automated Hunter irrigation system with pop-ups around the edge and in the middle of the pitch."

The stadium has no real shade issues, with only the south stand causing James a small problem in the winter if they get a frost. "Other than the shade covering a few places, I'm lucky enough to get sunlight almost all year round. If the forecast is for a heavy frost, I will use frost covers to protect the pitch before a match. I have an army of volunteers who help me get them on. We don't suffer much from frost down here; we probably only need to use the covers two or three times a season."

James talks me through his maintenance regime throughout the season. "Whilst the pitch is growing in, I will cut it at 28mm. Once established, I will cut every day using the Dennis G860, lowering the height gradually each week until I get down to 24mm, which is matchday height. In winter, I will cut the pitch at 25mm three days a week. After the game finishes, I will have a walk over the pitch and divot for an hour. The next morning, I then go over the pitch with the tractor mounted brush and, occasionally, I like to put the Campey UniRake over the pitch to break up any debris that has accumulated on the base of the pitch. Then I will use the Allett Uplift 86 to clean the surface."

"I didn't have a very good start to the growing in season as, three days after the renovation, we had a massive downpour. This washed all the seed into piles, so I had areas around the pitch where the grass was too thick and places where nothing was coming up. So, I overseeded again with the dimple seeder to fill in the affected areas. Once the pitch had established, I had to go over with the scarifier to thin out the thicker areas of growth."

An essential part of James' maintenance programme is aeration. "I have carried out a lot more aeration this season what with the heavy rains we have been experiencing around the country. I have used the Toro ProCore 648 three times with 19mm tines at a depth of four inches and the Air2G2 twice with six-inch tines."

James is responsible for the timings and application of fertilisers throughout the season. "With me being here every day, I know when it needs a feed. I don't take soil samples; it's a matter of keeping my eye on the pitch and knowing what has worked in the past. I will use a granular fertiliser every three weeks, mainly a 10:4:4 at low rates of 25g/m2, and this is topped up with a liquid fertiliser mixed with bio-stimulants and turf hardeners."

Since Turf Tonics have been managing the pitch, Premier Pitches have undertaken the end of season renovation works. Last summer, the top 25mm was koroed off; then it was topdressed with forty tonnes of sand and brushed in. It could have done with more sand, but the budget wouldn't stretch that far. We then overseeded with 25 bags of Johnson's Premier Pitch with the dimple seeder three ways. Finally, we applied a granular pre-seed fertiliser." 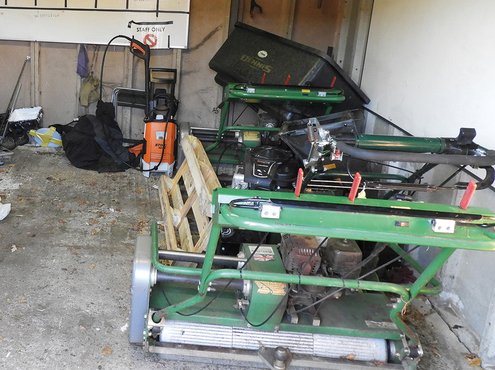 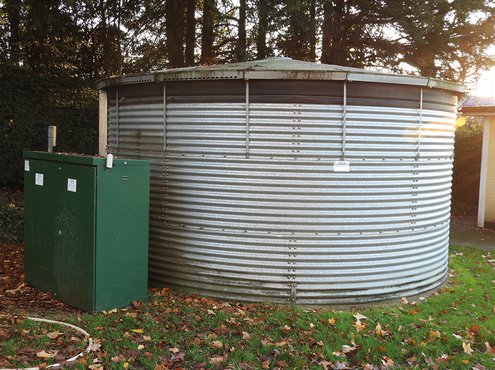 The machinery James uses is owned by Turf Tonics. This means he has access to a variety of kit to help him look after the pitch. "I don't have my trailer licence yet, so I depend on the other lads dropping off machinery when I need it. The main pieces of kit I use each day are stored here."

I ask James what, if money was no object, he would invest in to help improve the quality of the pitch. "I'll tell you what I would like; a new, fully constructed Desso pitch with undersoil heating and a remotely operated irrigation system. I do get quite good recovery here because of the amount of light, but the pitch would hold together so much better if it were a Desso, in my opinion. It would also be nice to have some SGL lighting rigs to help the goalmouths recover in winter."

Foxes can be a problem for James with the stadium being open. "They cause a lot of damage to the pitch, especially after a match day. I often come in the morning after the game to find they have buried pies, chips and even bottle caps! What they want with them, I don't know. They also like to go to the toilet on the pitch, so I am always picking up their mess."

James tells me, like many others around the country, the pitch suffers from leaf spot from time to time and also red thread. "We do use fungicides if the budget allows, but that decision is down to Colin and Steve; generally, though, it will grow out." 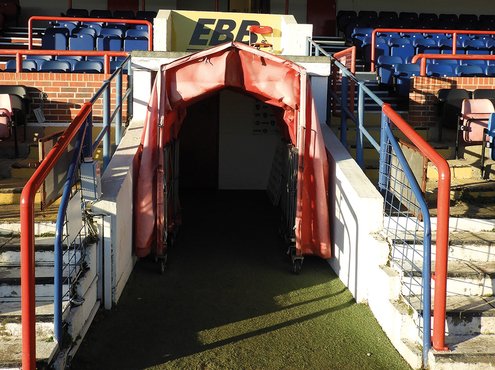 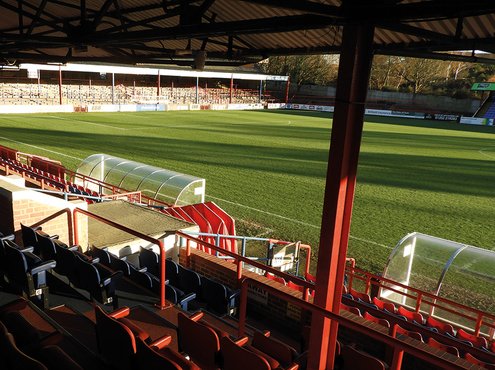 Travelling around the country, I hear all the time that the industry is struggling to attract new talent. With James' background, I thought he would be well placed to give his thoughts on this issue. "In my opinion, the main issue the industry faces when it comes to attracting young people from school to join us is the rates of pay in a lot of places; they can earn more money working in a supermarket."

"I also find it hard with the younger generation these days as they are always on their phones, tablets or computers sat at home. They don't tend to want to come out of their comfort zones. If they are not outside playing football or golf, how are they meant to gain an interest? More could be done in schools to promote what we do and create more interest in the job. When I was at school, I never saw anyone representing our industry on careers day. I suppose the hours of work can be unsociable and working in all weathers can put some people off but, like many other careers out there, if you are willing to put the work in the rewards are there." 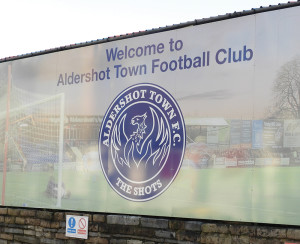