by Chris McCullough
in Schools & Colleges, Cricket, and Rugby
on 21 Dec 2016 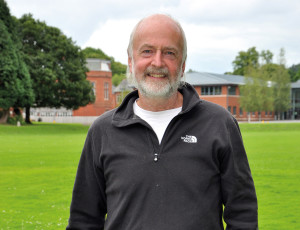 With grammar schools firmly back on the Government's agenda, one such establishment has been educating the youngsters of Northern Ireland - and further afield - for well over 120 years. Chris McCullough went to East Belfast to meet Michael Quee, Head Groundsman at Campbell College, an all-boys school catering for students from as young as four up to eighteen-years old

Founded in 1894, Campbell College has quite an impressive history and now acts as a boarding school with a strong international reputation, attracting students from as far afield as Hong Kong, Singapore and Africa.

The grounds of the school extend to 130 acres and are sited very close to Northern Ireland's Parliament Buildings in the Stormont Estate. All the school's facilities are located on this site, which also contains a small lake and a forest named Netherleigh.

Past pupils of Campbell College are known as Old Campbellians and the school has an extensive past pupil organisation known as the Old Campbellian Society, which has several branches across the United Kingdom as well as regular alumni reunions at the college itself.

Also famous for its excellence in rugby, Campbell College was founded thanks to a bequest from Henry James Campbell, who had made his fortune in the linen trade.

Campbell College's junior school, formerly located on an adjacent site and called Cabin Hill, is now also located on the main premises.
Initially, the school was primarily a boarding school, but it has, particularly since the 1970s, become a day school; today it has 1200 pupils, of which 120 are boarders.

Until 2006, pupils began at the school at age eleven but, since the closure of Cabin Hill, has accepted pupils from four into the newly built junior school and both boys and girls into the kindergarten also located on the grounds.

The current headmaster, Robert Robinson, summed up the school up by saying: "We have one of the largest Combined Cadet Force divisions in the UK, one of the country's most successful school rugby teams, world-renowned authors, Olympians, Victoria Cross and Nobel Prize winners, international rock stars and leading actors among our Alumni."

"Not to mention we have our own pipe band and 120 years of history, our buildings hold over a century of stories in their walls! The list goes on."
"Boys walk through our gates at four years of age and, from that moment, they are Campbellians until the end of their days. We have generations of families who have attended the school; some of whom have been married here and many of whom have their names etched into our history. This is no ordinary school; it is a family and a way of life."

Incidentally, the college's shooting team is regarded as one of the best in the UK, consistently performing well in all major U19 competitions.
The man tasked with looking after the extensive grounds is Michael Quee who has a wealth of experience in sports ground maintenance and development, and his knowledge of the grounds extends back over a period of twenty-nine years.

Michael is well educated and experienced in groundcare as he previously worked for a number of local landscape contractors in his younger days.

He studied amenity horticulture at Greenmount College and was later involved with the National Training Authority as a senior's supervisor in a Youth Training Scheme.

Campbell College has two full time employees to assist Michael - Peter McCaffrey and William Brown - and they are joined by Alex Scott on a part-time basis, when required, in the summer.

Michael is present at the school on a daily basis to work as part of the team to ensure everything is running smoothly and to the agreed sporting timetable.

Michael said: "I have been around Campbell College for almost thirty years and, I have to say, I need to pinch myself some days to understand that I am working in such a pleasant environment as this."

"There is a huge amount of work to carry out here to get the various sporting pitches ready on time when the particular seasons start. The staff carry out great work and I enjoy working as one of the team, getting stuck in to ensure the grounds look their best."

"All told, we have 130 acres to manage, including eleven rugby pitches, one football pitch, two sand dressed hockey pitches, 300m gravel running track and four tennis courts. The remaining areas are amenity grass and wooded areas, so you can understand we get quite busy here at Campbell."

"The bursar is in charge of the budget for grounds maintenance, which includes the use of contractors for end of season work and for all the tree work as required," said Michael.

Each year, around 6,000 people that don't have any connections with the college use the facilities and grounds. The campus is opened up for a variety of public festivals, heritage open days, historic tours, school events, community events, charity activities, nature walks and, of course, sporting events.

As mentioned, there is a wooded area on the grounds and a number of the pitches have trees surrounding them, which can give some headaches for the crew managing them.

Michael said: "Tree shade gives us some problems with moss on the hockey pitches. We have to spray the pitches regularly to try and keep the moss down. There is also a lot of brushing carried out on these and the bitumen tennis courts to keep them free from leaves."

The 'showpiece' rugby pitch at Campbell College is named Fox's Field and is where all the major games are played. It, too, is surrounded by trees, but is also in an area that receives a good amount of sunshine which helps keep it in tip top condition.

When it comes to the maintenance programme, the workload is distributed out among all the staff, including Michael. Each person can multi-task and carry out any of the jobs required as they have all been trained to do so.

"We start to cut the grass every two weeks from the start of March and continue that programme through until the end of April when we increase the cutting frequency to weekly," said Michael.

"With heavy footfall on the pitches, we spike all the pitches as many times as we can from the autumn time."

"The pitches are marked out once a week, or as often as is required. We use a transfer wheel marker to paint the lines," said Michael.

Presentation of the pitches, particularly Fox's Field, is of the utmost importance.

"We pay a great deal of attention to presentation of all the pitches and other areas we look after," he said. "The front of the school has to look good all the time and, in particular, Fox's Field where the first fifteen team play."

"At the end of the season, we always have a number of renovation works to carry out which can be a real battle with unpredictable weather."

"The rugby pitches are verti-drained and have sand spread on them. We also direct seed the areas that require it. Regular maintenance is carried out on the cricket square which is scarified, overseeded and has topdressing applied at the end of the season."

"On the artificial surfaces, we blow away and brush the leaf matter and any other material that has settled there. We also spray for moss and weeds on these surfaces," said Michael.

Both Michael and the school staff keep abreast of all the new regulations that are involved in the industry and receive ongoing training when it is required.

As far as pests go, the only real problem the team has is with crows gathering in the trees, which subsequently swoop down and damage the pitches on the hunt for leatherjackets and chafer grubs.

"It's a real pleasure to still be involved with looking after the grounds at Campbell College," said Michael. "With almost thirty years' experience at these grounds, I know the place inside out."

"It is somewhat fulfilling to see all our efforts appreciated by the school staff, pupils and the public alike when they visit the premises."
There isn't a great deal of machinery at the school as the majority of it is hired in when required.

"The tractors and implements we use for spreading fertiliser, for spiking and rolling, are all hired in from Cyril Johnston Hire Ltd in Carryduff as and when we need them."

"The Lawnmower Centre in Saintfield is responsible for all the servicing of the smaller equipment and for any repairs necessary," added Michael. "It is a system that has worked well for us over the years."