by Charmian Robinson
in Industry News
on 25 Jul 2012 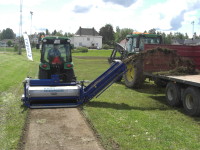 When the Campey team renovated a school football pitch in Norway during a European tour they made the local news.

"Credit where credits due," said Simon Gumbrill of Campeys. "Lee Morgado and John Campey, together with Campey Norwegian Distributor, PGM, worked tirelessly and did a fantastic job."

Simon, sales director for Campey Turf Care Systems, declared this second European Tour a complete success and well worth the time and effort spent in organisation and logistics. "What an amazing tour," said Simon. "We received plenty of thanks for the effort we put in and while it is good to be noticed by our fellow professionals when we tour, we don't often make the local papers."

"The journey began in Germany at Hamburg Football Club (HSV) with a full pitch renovation on a first team training pitch and this set the tone for the rest of the tour." Simon said: "Attendance was excellent throughout the six weeks and the feedback was consistently positive at every venue and demonstration day."

AWARD FOR NUMBER ONE DAKOTA DEALER
The first event was held in conjunction with Campey European Distributors for Germany, VGR Group and GT Equipment. During the day Mark Trübenbacher, MD of GT Equipment, was presented with an award on behalf of Dakota Peat and Equipment for "Number 1 European Dakota Dealer".

Next port of call was Denmark for a demonstration day at Idraetsomradet Gladsaxe, near Soborg, just north of Copenhagen, followed by a day at the training ground for FC Copenhagen and a lesson in effective aeration. Then it was onward to Norway where approximately forty Greenkeepers attended a short product demo in very hot conditions. Again aeration was the main theme with the Koro RCD, Imants Shockwave, Rotoknife, Sandcat and the Coremaster being used on tees, greens and fairways.

But the big event was when the Campey Team were invited to Arasen Football Stadium, Lillestrøm, Oslo, to give a presentation of their machinery to some of the leading Norwegian groundsmen. "It was a fantastic opportunity to explain how the machinery works" explained Richard, "We were able to illustrate exactly how surfaces can benefit from the different techniques and clarify who uses our equipment and why."

ENGLAND v. NORWAY MATCH HIGHLIGHT
The tour was occasionally punctuated with exceptional events - the match England v Norway at Ullevaal Stadium, Oslo, being one of them - and the visit to Bjaavann Golf Club, a fantastic golf course with stunning scenery, just north of Kristiansand.

Here the Greenkeepers and groundsmen from the south of Norway saw the Imants Sandcat working on a large tee alongside the Koro Field Top Maker with scarifier collector. The Dakota 412 Turf Tender and 410 Turf Tender were busy topdressing fairways and greens.

Several more demonstrations were held in Finland, again in Denmark and finally a return visit to Germany before heading home.

Richard Campey expressed his delight at the enthusiasm of everyone involved. "It can at times be an exhausting exercise but extremely worthwhile," he said. "Once again we have seen how co-operation between nations can lead to a mutual respect as well as developing lasting friendships and on-going cross-border trade."