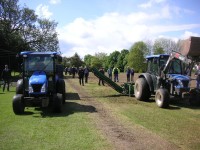 Campeys have worked tirelessly to demonstrate their unique and innovative product range and have been on tour in Europe demonstrating their turf renovation machinery that began at Sparta, Prague. Included in the demonstration was the KORO range of sports turf renovation equipment, designed to rejuvenate worn pitches quickly and without undue reliance on man-made chemicals.

Also demo'd were the DAKOTA Turf Tenders, amazingly versatile, high-performance top-dressers, for which Campeys are the main distributors. The Koro range was designed by Dutchman Ko Rodenburg, who was the Turf Manager of Rotterdams football pitches. He developed a range of machinery that worked efficiently and effectively with the goal of achieving 600 playing hours on a pitch per year.

The Koro Field top maker range is designed to remove poa annua, thatch build up and weeds on the entire turf allowing for rapid regeneration and was quoted as being in the top 10 machinery innovations of the past century. 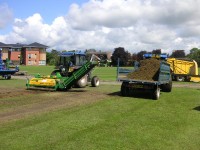 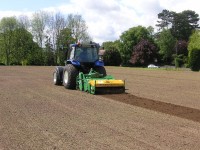 The complete turf renovation process was demonstrated using the latest machinery beginning with thatch removal. The Campey staff used the Koro Field top maker scarifier that is an hygienic method as it removes the thatch without leaving debris, the Verticutter collector which will go down to a depth of 40mm scarification and consists of a modular unit, and has been labelled as being the number one scarifier for hygienic surface removal.

The topmakers were designed to save costs and to improve quality without the need for chemicals. 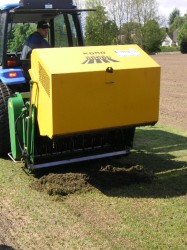 The steel hopper collects thatch and other debris therefore there is no requirement for a tractor and trailer to run alongside.

The blades can be set higher for fraise mowing at 1 or 2mm and will remove thatch without affecting the grass roots allowing play to recommence almost immediately. At greater depths it is able to remove compaction and shallow rooting grasses for a more intensive pitch rejuvenation.

The 1200 and 1500 Verticutter has a spec of being able to work to a width of 1.2m to 1.5 m with a working depth of 0-50mm requiring a 35hp tractor. These comes with the option of a 1.5 or 3m blade that can be quickly changed. Koro Field top maker was first demoed in Sandbach and then first used commercially with confidence on Manchester United pitch in November 1999 and on Chelsea FC pitch in 2000.

Ground care staff that use this method have reported a saving of up to 14-15k in fungicide application. Using the Koro top maker on pitches that had a high coverage of poa annua has enabled a reduction down to 1-2% coverage and with effective maintenance a 100% rye grass sward is attainable.

The divots witnessed in a game where the turf is lifted is a direct result of a high concentration of poa annua and highlights the poor quality of a pitch, with a higher concentration of rye grass this can be negated.

The Koro recycling dresser which aerates soils vertically, removes soil and re spreads as a dressing mixed top layer that has more biological activity and supports strong turf grass rooting. The 1300 model has a working depth of 1-3m and the option of a rear mounted brush. The advantage of this method is that new soil/sand or root zone does not have to be bought in, therefore saving costs and the risk of introducing less favourable soil.

To assist in assessing compaction a simple penotrometer can be used. This consists of a gauge needle that shows where compaction problems are, and can be purchased for a couple of hundred pounds. 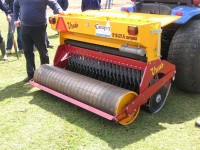 The depth of incision can be adjusted from 0.5- to 2.5 cm. Precise amounts of seed are placed in the slits and the roller closes them for germination. This seed to earth contact speeds up germination and prevents loss of seed. After this reseeding process play can recommence as early as 6 weeks although 10 weeks is the preferred period.

The Dakota dresser range completes a job that previously required 2 machines and it frees up labour for other tasks. The machine incorporates independent walking beam axels giving the unit a light footprint on the turf avoiding damage and allows ground contours to be negotiated with ease.

The Dakota 440 Turf tender allows users to move materials, apply top dressing and fill bunkers with sand. The dressers are able to place materials precisely, discharging them either via its back or side conveyors or by using the front mounted chute. Powered by a tractor of 40hp plus the machine has two spinner discharge discs that provide spreading widths from 3.66m - 12.19m. 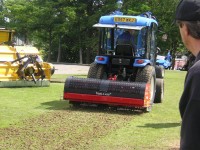 The demonstration day proved to be a learning opportunity for many delegates who witnessed best practice methods with the added benefits of these methods reducing maintenance costs coupled with a sympathetic approach to the environment.

Having recently graduated from Writtle College with a BSc Hons in Landscape and Amenity Management, seeing the machinery in action rather than just simply learning the processes was informative and inspiring which sadly, local authority staff missed out on this opportunity.

The rhetoric for the day was that the English football league stadium pitches are of the highest level in Europe, however on a local authority level pitches are generally of the lowest quality compared to Europe. The need for improved quality needs to be addressed, but with only 1 local authority attending the demo day the question of local authorities indifference or laissez faire approach demonstrates that apathy (or poor funding) rules.

For further information about Campey Turfcare click on the following link:- www.campeyturfcare.com/