0 Campeys show pitch renovations at their best in Germany 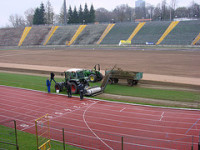 Campey Turf Care Systems continue their quest through Europe with the team about to conclude the penultimate week of their demo tour. After completing last week's event at Golf Course Trnovo in Ljubljana, Slovenia, they headed north through Austria into Germany where they've carried out two complete pitch renovations at The Rosenau Stadium, Augsburg and FC 1 Nurnberg.

At first the visitors seemed a tad apprehensive as they observed the Koro by Imants Topmaker stripping off the heavily poa annua-infested surface. Once it was lifted, one hundred tonnes of sand was loaded and spread by the Dakota 414 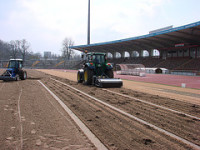 Turf Tender and Raycam Speed Dresser 24. The Koro by Imants Recycling Dresser 1900 was then run through the pitches relieving compaction and bringing 60 tonnes of rootzone to the surface in one pass without disturbing the surface levels.

Next the pitches were levelled with the Koro Speed Harrows before being seeded with the Raycam Aeraseeder and Vredo disc seeder. To complete the operation, the Imants Rotoknife with its mini discs set at 40mm apart and 40mm deep with dual rollers was run over the surfaces, which were left clean and perfectly flat. 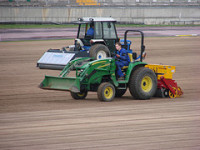 The visitors were stunned that the complete operation could be carried out by just three men with three tractors in less than ten working hours, agreeing that it proved what can be achieved with well built, high work rate machinery. 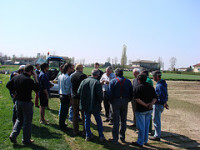 Following a further demo at the training facility of Bundesliga side FC Köln, the team are heading west to take in their final two destinations of the tour at Kozzaken Boys in Werkendam, The Netherlands on Tuesday 27th April and finally to KVC Westerlo in Belgium on Thursday 29th April.

The events are open to everyone involved the renovation and maintenance of natural sports surfaces and work begins at 10am.