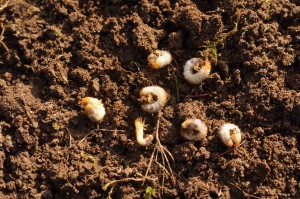 Chafer grubs can devastate golf courses, sports pitches, and even racecourses, often resulting in damaged surfaces that will be costly to repair. Pitchcare talks to the Bayer Technical Manager Dr. Colin Mumford to tell us all about these insects, and give us some handy hints on how, and when, to control them.

What is a Chafer grub?

The Chafer grub is the larval stage of a range of beetles including the Garden chafer (Phyllopertha horticola), Summer chafer (Amphimallon solstitialis), and Cockchafer (Melolontha melolontha).

The grubs are easily recognisable, their bodies are a cream colour with a distinct brown head, and they have three pairs of legs on the front sections of the thorax. They are typically found in a rolled up position. Depending on the species and stage of growth they can vary in size from 5 to 30 mm in length.

The different species have different lifecycles, the Garden chafer is one year, the Summer chafer is two years, and the Cockchafer is three years, but can be longer. 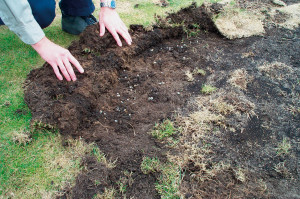 A one year life cycle will consist of a mature grub pupating and emerging as an adult beetle in the late spring or early summer (typically mid-May). The adult beetles will then head for nearby trees and bushes and mate. The female beetle then lays her eggs in the turf.

The eggs will hatch out in 14 to 28 days, depending on the species. The larvae that hatches out from the egg is a 1st instar grub. The grubs have three instar growth stages through the summer months (1st, 2nd, and 3rd). Each stage feeds on the grass plants roots.

With the onset of late autumn and winter, the third instar grub will go down deeper into the soil profile to the relatively warmer regions of the soil, where it will overwinter. When the soil warms up in the spring, the third instar grub will return to the upper regions of the soil to feed on the grass plant roots, before pupating in late spring or early summer.

What damage can they do to turf?

Secondary damage comes from birds (typically rooks and starlings) and mammals (foxes and badgers) that lift and remove the turf to feed on the grubs. This causes far more devastating damage than the grubs cause themselves, and can require major renovation work to reinstate the playing surface.

How can I spot them - what are the tell-tale signs of activity?

Tell-tale signs of Chafer grub activity are the turfgrass displaying drought stress symptoms, whereby the grass plant's leaves go a straw colour and die back (referred to as primary damage). This is due to the grass plant not receiving adequate water in dry conditions as the grubs sever the root system as they feed upon it, however drought stress symptoms may be masked by supplemental irrigation during dry periods.

Loose turf is another indicator, whereby you can literally lift the turf away from the soil as it has no root structure to anchor it to the ground.

Birds pecking at the surface also indicate Chafer grub activity, as the birds are feeding on the Chafer grubs.

Where are Chafer grubs most typically found?

Chafer grubs are typically found on sandy soils, but can still be found on clay dominant soils. They are becoming a nuisance pest on turf across the entire UK, including parts of Scotland.

Are they a growing problem?

Bayer is receiving more and more enquiries about Chafer grubs, so they do appear to be a growing problem.

What threat do they pose to the different surfaces?

Depending on the playing surface, the grubs will ultimately cause two different problems. The damaged turf will affect playability (for example, ball roll and bounce). The damaged turf will also have a big impact on player welfare where running or contact sports, such as football and rugby, are played as the affected turf may not provide adequate traction, leading to increased slips and falls and subsequent player injury.

This is especially important on racecourses given the speed at which horses run on the racetracks, and the resultant injuries that can happen to a horse and its rider during a fall.

When are they active?

If the weather conditions are ideal the grubs can be found all year round just below the surface of the turf feeding on the grass plants roots The factors that govern the rate at which they eat the roots are the soil temperature, their appetite, and the stage of growth they have reached.
The adult beetles tend to fly about at dusk, but can still be seen on the wing during the day and are only active between May and July, depending on the weather conditions.

What can I do to avoid a Chafer grub problem?

Try to withhold any irrigation when the beetles are laying their eggs. In dry conditions, the eggs can desiccate and become unviable, reducing the amount of egg hatch that occurs. However, withholding irrigation will depend on the health of the turfgrass and the environmental conditions at the time.

Some old reference books refer to rolling the turf to compress the soil around the grub to prevent its movement, but I wouldn't advocate this technique, as you may be causing more harm than good. I haven't seen this method mentioned in contemporary turf maintenance books.

If I find I have got Chafer grubs, what can I do to get rid of them?

If you find Chafer grubs, you have to weigh up the damage they are causing with the need to control them. However, if left unchecked, it's likely that the population will escalate to the point where you are struggling to control the Chafer grubs.

Merit® Turf (imidacloprid) is currently the only approved insecticide that will successfully control Chafer grubs in the amenity sector. Merit® Turf works in two ways, firstly by direct contact with the grub, and secondly, which is the main control method, it is taken up by the grass plant as it is a systemic product. When the grubs feed on the roots they ingest the imidacloprid and are controlled.

Merit® Turf can only be applied once per year, so it is important to apply it at the right time to achieve the maximum control possible. The ideal time to apply Merit® Turf is when you see the adult beetle either on vegetation or flying about, as you will know that they are in the process of laying their eggs, which will hatch in 14 to 28 days. This gives you time to apply Merit® Turf, and time for the grass plant to take it up through its roots, ready for the newly hatched grubs to feed on.

If you don't see the adult beetles, but know you have an issue with Chafer grubs, the best time to apply Merit® Turf is between the months of May and July. But if you apply Merit® Turf later in the summer (rather than early summer,) your turf may be subject to damage that will be caused by the grubs before the application is made.

Merit® Turf is a granule product and should be applied at a rate of 30kg per hectare (3g m2). It's preferable to apply when there's low light intensity to avoid any potential damage to the granules through exposure to high levels of ultra violet (UV) light. It's also important that the treated area is irrigated as soon as possible after application - to knock the granules off the leaf (to minimise exposure to sunlight) - and to wash them into the soil to the target region of the soil where the grubs and turf roots are.

A minimum of 5mm depth of water will be required, and if there's a significant thatch layer the irrigation rate should be increased to 10mm depth of water or more, depending on thatch levels.

What are the financial implications of the damage?

Cost implications can include a loss of revenue for the facility (golf course, football pitch, racecourse etc) when the turf is damaged to a level that interferes with play, or becomes an unacceptable hazard to the users of the facility. For larger facilities there may be a loss of revenue from spectators if a sporting event has had to be cancelled.

Other cost factors to consider are the labour costs to reinstate the surface, the capital cost of replacing the damaged turf i.e. new turf or seed, and the time required to let new seed and/or turf establish before play can continue.

MERIT® TURF CONTAINS 5g/kg IMIDACLOPRID. USE PLANT PROTECTION PRODUCTS SAFELY. ALWAYS READ THE LABEL AND PRODUCT INFORMATION BEFORE USE. PAY ATTENTION TO THE RISK INDICATIONS AND FOLLOW THE SAFETY PRECAUTIONS ON THE LABEL. TRIPLE RINSE CONTAINERS AT TIME OF USE, PUNCTURE AND INVERT TO DRY. (MAPP 12415) (PCS 02896)

Pitchcare are a distributor for Bayer Products, for any technical assistance or further information on chafer grub problems you can call +44 (0)1902 440 250