It all started twenty years ago when pig farmer Alan Chappelow had a 'light bulb moment', and so began Alan Chappelow Sports Grounds Contractors. David Mears chatted recently to Alan's youngest son Ben, discovering how this West Yorkshire based family company came to fruition and has developed. 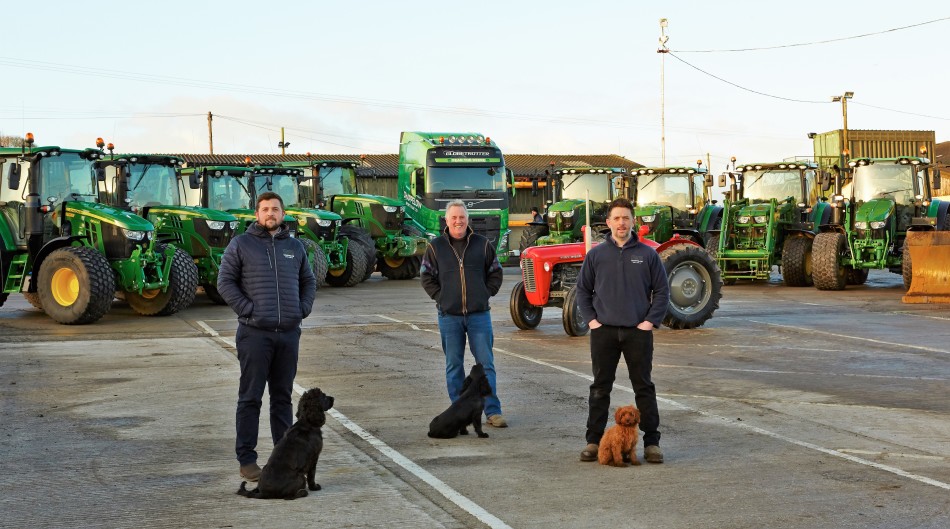 The Chappelows left to right: Ben, Alan and Edward with some of their kit ... and dogs

It was in 2001 when Alan was approached by his neighbours, Dewsbury and District Golf Club, and asked if he could help them with some greenkeeping/contracting work. It was not a problem to Alan, so he fitted this in around his work at his farm and, after a short period, won a contract with the club for mowing work.

Whilst working on the course, Alan observed various contractors coming on to the site from time to time and saw the work they were undertaking. This was when the realisation came: 'what an opportunity'; contracting, surely, was the way forward for him!

Inspired by the golf club, and folk there he now knew well, purchasing a Verti-Drain was the first investment in his new venture, along with flotation tyres to fit to the Case tractor he had. Word got around and Alan was soon undertaking work in the immediate area, working for local cricket, rugby and football clubs. As work developed so did the need for extra kit; an overseeder and spraying kit was added enabling more tasks to be undertaken, which aided expansion of the business.

The first five years saw good natural growth and it was decided to form a limited company; Chappelow Sports Turf Ltd was incorporated on 2nd November 2006. Sons Edward and Ben had always enjoyed being involved, spending time helping out in the business whilst at school and today, well established and working full time, are directors, along with Alan and his wife Helen. 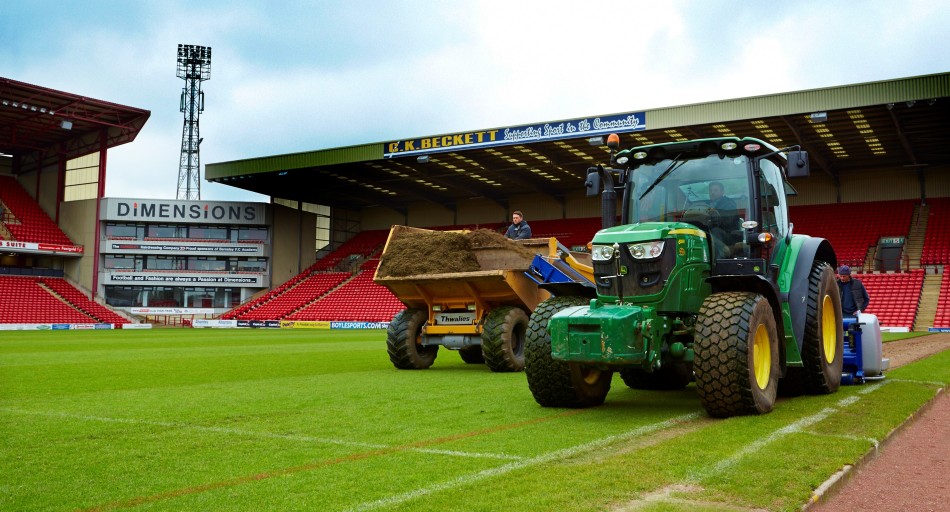 Eldest son Edward, now 32, attended Myerscough College straight from leaving school and on a day release basis, attaining a Foundation Certificate in Sportsturf. He was clear on what he wanted to do from the start! On the other hand, the now 29-year-old Ben, didn't go straight into the business however. His parents had high aspirations for him and encouraged him to take A levels and seek a university place. He secured a place at Lincoln University to study marketing which was a subject he was interested in and one that would help his career. He remembers that he managed Fresher's week and perhaps a week or so more but, as he said; "This just wasn't for me; I needed to be working, I'm very much hands on!"

Ben returned home and quickly fell into the contracting work and loved it! It's not all work though as the team do make time to study and/or attend courses to stay abreast of the latest legislation, product developments, latest techniques and, of course, Health and Safety requirements.

All three men hold the necessary certification for the variety of work undertaken and ongoing training is carried out with all employees; the Chappelows are ably assisted by ten to twenty, with the total number depending on work load and seasonal work. The company also holds registration with the Construction Plant Competence Scheme (CPCS) providing extra peace of mind for clients, as all staff carry CPCS cards.

The company, throughout the last twenty years, has not only grown in employee numbers and variety of work, but in the area covered. Yorkshire was developed initially and then beyond and, as Ben said, "if there was a good job we could do and it was worthwhile, we'd travel!" Ben thinks one of the first away jobs was when he was young and before he was fully involved in the business; "It was draining a school pitch in Swindon. 'Where's that?' I asked! I knew it was a long way down south. Off went Dad and Edward with four lads." Long journeys and overnight stays seemed a confirmation that the business was growing. 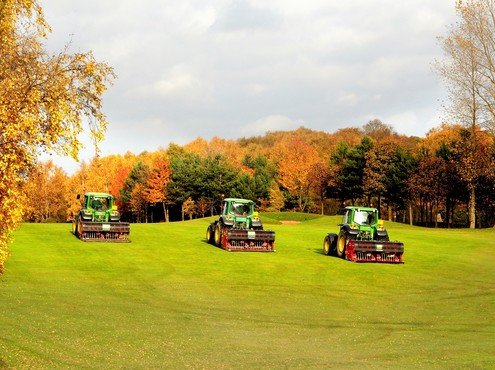 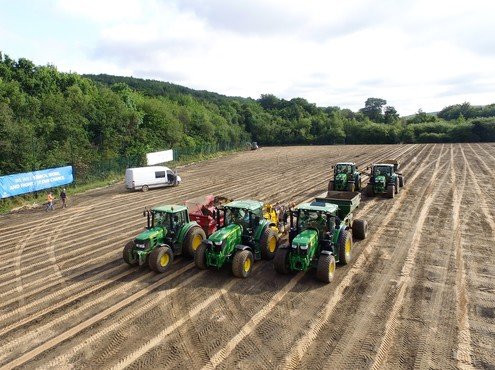 Now with a number of years' sports pitch construction under their belts, the company offers a complete range of services from renovation to brand new design and build projects. They work with many different clients and work usually splits as follows: April to June - football and rugby, August to September - cricket, and winter - golf (particularly tees and greens).

The company's clients fall into eight categories: football, rugby, cricket, golf, bowls, equestrian, schools, colleges and universities and local authorities. Ben said that they generally work directly with clients but also through consultants or charities and others administering grant aid.

Clients range from small sports clubs through to Premier League football clubs. The company has longstanding business relations with, for example, Leeds United, Huddersfield, Barnsley and Sheffield Wednesday football clubs; all reasonably local. However, they also work with some a good distance away, such as Brighton, Exeter and Colchester! Ben believes that the furthest they have been, however, is Dublin! Clontarf Cricket Club had heard of Chappelow's reputation and asked if they wished to tender for what they called 'a once in a generation project to relay the entire square'. Chappelow tendered and were awarded the work which they carried out in 2019.

Chappelow's impressive kit list keeps expanding (see machinery list) and features a number of specialist machines. One favourite that really stands out is the CAT D6 Medium Dozer, Ben tells me. "The dozer is equipped with a fully automated dual grade laser system," Ben explaines. "When set up, the blade follows the laser without operator involvement; such precision, it's been tremendously beneficial to us!" 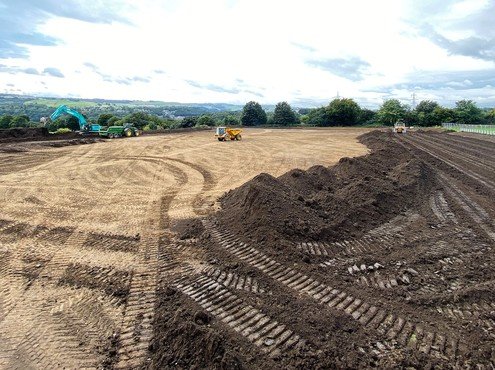 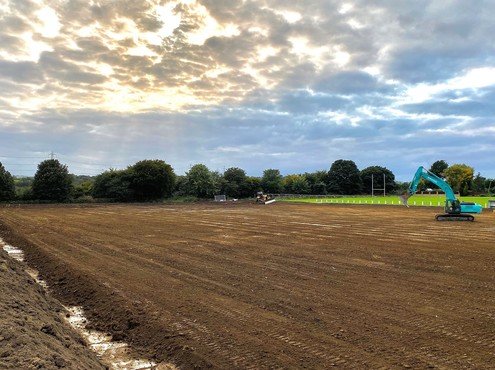 The company does not have allegiance to any one particular brand of machinery and each purchase is thoroughly considered for value and utility. There seems to be one exception to the brand allegiance however; all their eleven tractors are John Deere and Ripon Farm Services supplied these along with other cultivation equipment. Ben tells me that they all find John Deere tractors reliable, user friendly and cost effective. As he says: "You don't need loads of tuition to get going!" He said that kit is a mix of agricultural and amenity and, on occasions, there is a cross-over. Agricultural machinery he feels is more robust than amenity items in a number of cases and often without the amenity price tag!

Dedicated and purposed machinery is sourced from specialist distributors. Servicing is carried out in-house as they have their own facilities and trained personnel. The company seldom needs to hire machinery, but there are odd occasions; usually it's for a 360 Excavator. On the matter of a wish list: "Our own fleet of different sized 360 Excavators!" says Ben with a smile.

Asked about changes in working practices, Ben commented; "There have been a growing number, and a good example is in pitch construction; technology has advanced in this sector at a tremendous rate! The introduction of artificial and hybrid pitches is probably the biggest change I've witnessed in my time in the business. Most Premier League clubs now boast hybrid pitches, for instance".

Best practices to renovate had to be learned and, as Ben added, "we need to stay on top of our game!" Asked how can you improve and what kit is needed? Ben said that one item that sprang to mind was the need for a Universe Rotor to fit on to the Koro Field Top Maker; "A great piece of kit!" 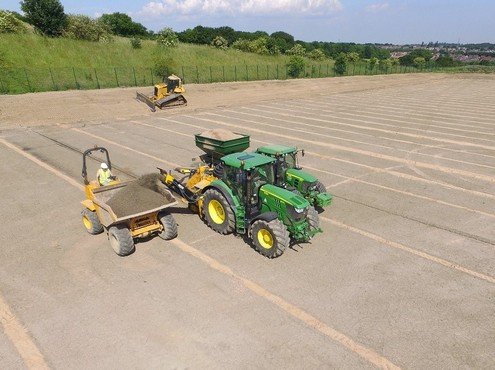 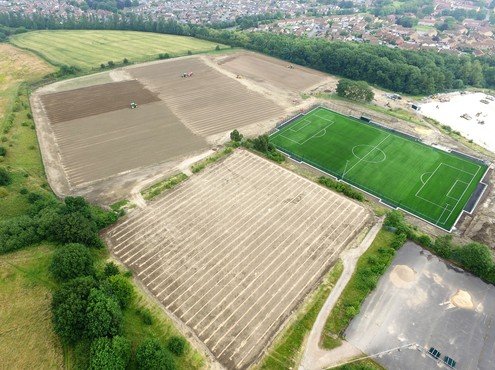 We then turned to projects; biggest, best, etc? Ben immediately thought that the most innovative and rewarding project that the company had undertaken was the installation, last year, at Siddal ARLFC, Halifax, of a HATKO Hybridgrass carpet pitch, achieved with grant support. This, Ben said, is the very latest technology as it differs from, but is comparable to, stitched pitches. The work entailed laying the carpet on a constructed and drained surface with a carefully selected rootzone layer, then filled with a specifically defined rootzone mixture, before high quality sportsfield grass was seeded into the surface. The natural grass grows between the synthetic grass fibres, creating a strong and vigorous playing surface. The 'open' texture of the backing ensures that the grass roots are not obstructed in their vertical movement downwards starting from the day of installation. Ben believes that, although there are now a few examples of this product, this was the first of its type in the UK.

The company's biggest project, completed in 2020, was the construction, for York City Council, of seven pitches on the Ashfield Estate adjacent to the A64. The land was low-lying old agricultural and marsh. Chappelow reshaped and created several plateaus, installing primary and secondary drainage. Because of the nature of the land and location, extra sustainable drainage was also necessary which included attenuation ponds. "This was, by far, our biggest and most challenging project." said Ben, "and made more difficult by some really bad weather!"

As with many companies, the Coronavirus has had an impact on the business. The company managed to sustain work pretty well last year, but now it's beginning to bite. "Last year's end of season football pitch renovations caused some issues as a number were hesitant to undertake large scale work when no one was sure when play would resume!" said Ben "But, we were fortunate that other projects, already booked in, could be brought forward to fill the holes in the diary." 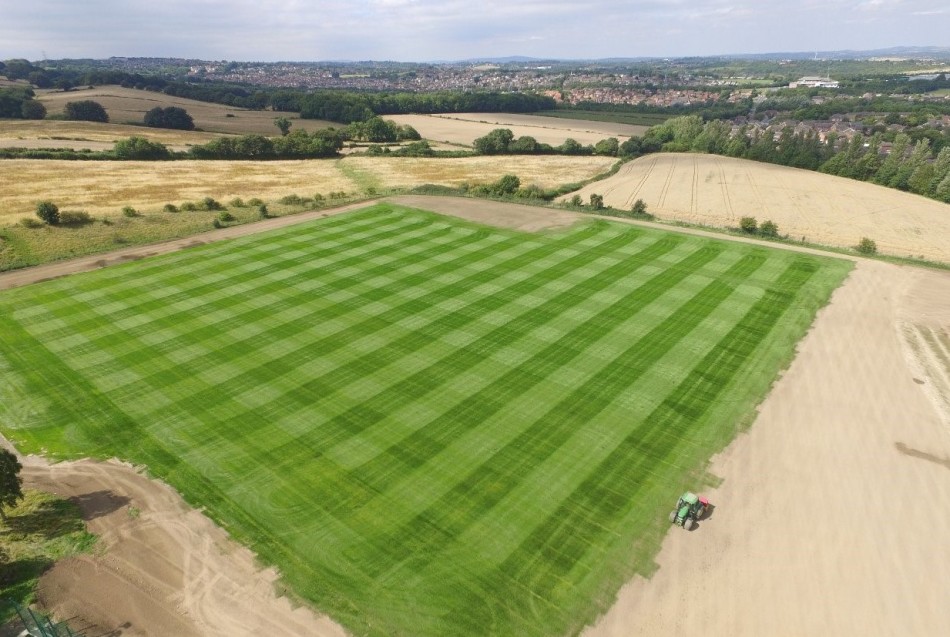 The third lockdown has definitely focused minds and just when confidence had started to creep back! Some of Chappelow's clients are hesitant to confirm work at present with so much uncertainty around, but as Ben said, "looking on the bright side, there is work booked in for the summer, football is continuing and so confidence is slowly returning."

The company has plans for the future and the focus is on bigger projects, particularly stadium construction. They see the opportunities to respond to what they believe will be a growing demand from customers new and existing in the industry to develop their grounds using the new technologies. Not being able to use a pitch because of weather or damage is becoming unacceptable and investment in hybrid pitches, allowing 24/7 play and training, is gaining momentum.

Changing weather patterns have had an effect on the business. For example, handling greater rainfall has meant altering drainage specifications. Extremes of weather do cause problems and 2020 has seen periods of persistent rainfall! Ben also commented that the seasons have changed and seem to last longer and to start late.

Chappelow has built a good reputation over the years, gaining most work through 'word of mouth' and recommendations, but social media helps too and is used alongside modest advertising in prominent industry magazine Pitchcare. The company works closely with a number of consultants who provide help and information. This often leads to work from clients seeking a reputable contractor for projects. Staying in contact with people from all sectors within the industry is definitely important.

The company, like so many in the sports turf industry and elsewhere, will be pleased to see the back of Covid (won't we all?) and regain some semblance of normality. Meantime, it's a case of soldiering on to the best of their abilities, conforming with the latest regulations and continuing to provide the service and quality their clients have grown accustomed to. 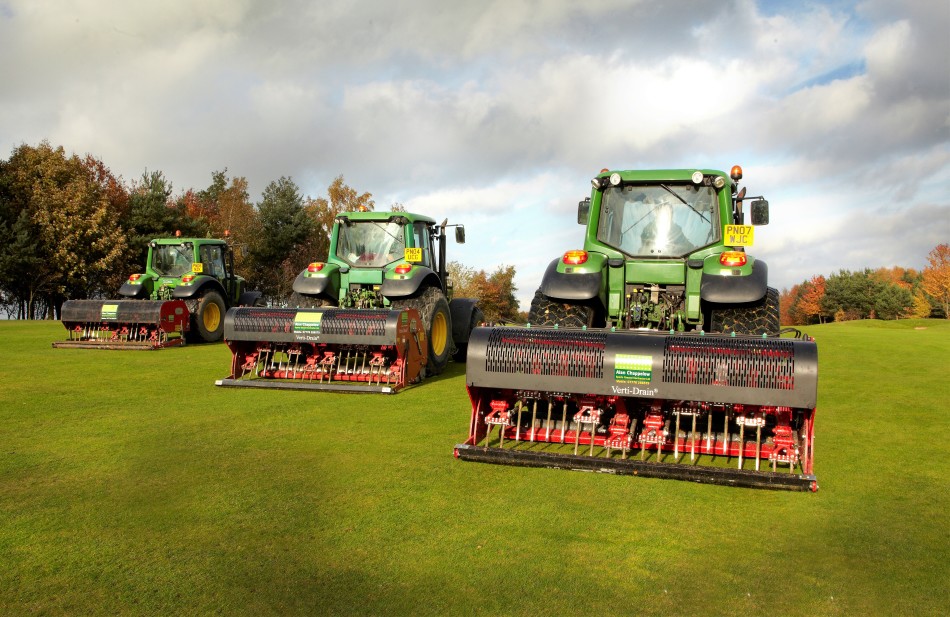