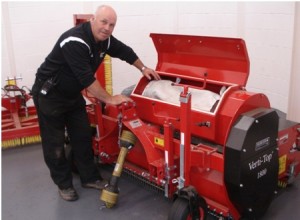 St George's Park at Burton on Trent, Staffordshire is the new National Football Training Centre and features two hotels, a state-of-the-art medical department and a precise replica of the Wembley pitch.

Developed at a cost of £100m it will be a training base for England's 24 teams and is intended to become the home of English football development by boosting the number of quality coaches and homegrown managers.

In addition to 10 natural grass pitches, St George's Park has two synthetic pitches, allowing play in all weathers and mirroring the growing interest in synthetics at the highest level of the game. Indeed, the brand new indoor pitch has been installed to state-of-the-art standards, as Head Groundsman Alan Ferguson explains:

"The new pitch is the largest indoor soccer pitch of its kind in the United Kingdom, and has a Desso IDNA synthetic surface. It has been built to FIFA 2* standard, and as such has to pass an annual inspection and be maintained to exacting standards."

The second pitch was built 10 years ago during the inception of St George's Park.

"Although it is an older pitch, it has only had two years' real use, so is still in good condition," Alan comments.

He has worked closely with Contractors Technical Surfaces who renovated the older pitch, and has committed to undertaking the routine maintenance in-house.

"We looked at the different systems on the market, and Charterhouse offered the best combination of equipment. Curtis Allen was also extremely helpful when it came to specifying machines, and when we visited the test facility in Holland it was clear that we were making the right choice." Alan explains. "The equipment that we have purchased gives us the flexibility to undertake a full maintenance programme if required."

He emphasises that it is a mistake to consider synthetic surfaces to be maintenance-free. "Synthetic pitches are not quite as expensive to maintain as natural turf, but it is a similar cost. I was surprised at how much is involved, but the new pitch needs the right regime in order to pass its inspections and maintain its two-star status."

The itinerary includes two Verti-Cleans which are used on a daily basis to remove litter and debris from the outdoor pitch and avoid a build-up of solid contaminants.

A Verti-Groom is used to brush, loosen and decompact the infill, using spring steel flexible tines. Specially configured rear poly brushes straighten and lift the turf fibres leaving them in a plush and upright for a soft and level playing surface.

On the indoor surface, the Verti-Top is used twice a month, employing a highly effective synthetic rotary brush to remove debris and top layer infill from the turf. It then sifts the debris out in a unique vibratory shaker which redistributes the clean infill back on the field. Finishing the work is a rear lag brush, leaving a clean and smooth playing surface.

"The difference with an indoor pitch is that you can get a build-up of dust, which the Verti Top keeps down. It is doing a great job," comments Alan.

With the pitches used for 60 hours a week each - in addition to elite training the outdoor surface has been designated for community use - Alan expects that 5-10 hours maintenance per week will be required.

"I believe that we will get at least five years out of these machines, even with the heavy workload and more challenging dusty environment of the indoor pitch," he says. "But they are well-built and robust, and I believe that regular servicing and good support from the manufacturer increase the longevity of hard-working machines. I'm very happy with the way that the machines are performing and the service that Charterhouse has offered."