0 Charterhouse Reputation Is Spreading At Musselburgh 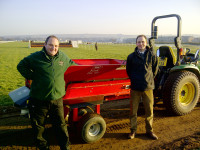 Musselburgh Racecourse can trace its history back to 1816, and has been revitalised with £7.5 million investment into its facilities since 1995.

As well as a new grandstand, the refurbishment of the Edwardian Grandstand and a new stable block, considerable resources have been put into improvements to the track itself.

Musselburgh hosts a number of prestigious fixtures, including a Cheltenham trials day, the Edinburgh Cup day in June, and the sell-out Ladies Day which attracts 7000 racegoers.

It's sheltered location to the East of Edinburgh, low rainfall and free draining soils mean that Musselburgh can race when many tracks are waterlogged or frozen, and Head Groundsman Mark Bemrose and his team of four full time staff work hard to produce the best possible going.

A programme of machinery upgrades has included the purchase of a Rink DS800 topdresser from Charterhouse Turf Machinery which is principally used to sand the bends on racedays.

"We apply the sand an hour before the first race if the turf is likely to be slippy, especially after rain," explains Mark. "It just gives the jockeys a bit more confidence when travelling at speed."

The DS800, an 0.80 cu.m capacity trailed, spinning disc spreader has replaced a truckster mounted brush spreader, and is capable of applying sufficient sand in a single pass, with two loads spread per bend. Spread width is up to 12m, useful on large scale tasks such as racecourse work.

"It gives a more uniform finish than the brush spreader and is so much quicker, with the large capacity cutting the downtime needed for refills," Mark comments. "It can also spread the sand whether it is wet or dry."

Before investing in spreading equipment, the team had to shovel sand onto the bends by hand, an onerous task on a busy race day. "It not only saves a lot of time using the DS800 but also gives a more uniform finish."

Applying top dressing after hollow coring - a practice which is making great improvements to the footing at Musselburgh - is another task for the DS800, and Mark comments that it is very easy to adjust for the different materials and spread widths, simply by turning a dial.

The racecourse's workhorse John Deere 4720 is commonly used to tow the spreader, but it can also be handled by an old 33hp compact where workloads require it.

"I had seen the DS800 elsewhere and got in touch with Charterhouse to see if we could try it. In conjunction with Sherriff Groundcare we were able to have it on demonstration for a number of racedays before making a purchase, which is a great service," Mark comments.

He adds that he would expect the 'sturdy' machine to last at least 10 years, but as a regular user of hired in Verti-Drains, he was already well aware of the quality and performance of the brand.

"We get on very well with equipment from Charterhouse, and it is also very well priced, so I would recommend the DS800 to anyone."