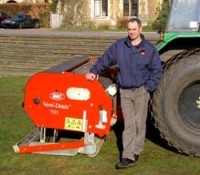 When the famous Surrey public school Charterhouse needed a machine to solve compaction problems on its sports pitches, it had no hesitation in buying a Verti-Drain deep aerator.

Ironically, the unit is distributed in the UK by its namesake, Charterhouse Turf Machinery of nearby Haslemere.

Grounds Manager Dale Gleed recently joined Charterhouse School, where he looks after 30 hectares (74 acres) of sports grounds, part of a 101-hectare (250-acre) complex. Facilities under his care include soccer, rugby and hockey pitches, cricket pitches and even a nine-hole golf course.

Charterhouse is situated in a free-draining area comprising light, sandy loam. However, intensive use of the pitches has caused heavy soil compaction leading to poor root growth and high infestation levels of Poa annua. In certain locations, the soil is so compact it suffers from poor drainage as well. All this has been aggravated by successive hot summers and, if left untreated, would cause long-term harm to the turf.

Dale Gleed was familiar with the Verti-Drain 7521 model from his previous job and, although he tested three other aerators, he decided the School should buy a genuine, original Verti-Drain.

The 7521 is a 2.1m (83in) wide machine that can aerate to an astonishing depth of up to 400mm (16in). Like other Verti-Drain models, it accepts solid or hollow tines. A central lever adjusts the tine angle for optimum results in all ground conditions.

In addition, the unit features a unique parallelogram configuration to provide a 'heave' effect as the tines leave the ground, breaking up compacted soil. This is the mechanical equivalent of digging a fork into the ground and pulling back on it, letting air back into the earth.

"The 7521 is well engineered with a proven track record," says Dale Gleed. "It's reliable and does all that we require, being used regularly on all the School's sports surfaces. Soccer pitches will be treated 2-3 times a year, and golf fairways and the cricket outfields twice yearly."

"The School used to call in contractors to undertake aeration work, but having our own Verti-Drain means we can use it quickly, whenever it is needed and when conditions are right. It's ideal."

As one would expect, Charterhouse School's high academic standards extend to its sports facilities, and it seeks the best quality surfaces for tomorrow's top sportsmen to perform on.

Because it can penetrate to such depths, regular use of a Verti-Drain is one of the most important grounds care operations to invigorate heavily used turf. By relieving compaction it encourages strong root growth.

More importantly in the long term, without such treatment soil can become acidic through lack of oxygen, leading to a vicious circle of thatch and disease, and even worse compaction.