The opportunity for UK racegoers to attend a Breeders Cup-style race meeting, with action under floodlights on both turf and all-weather tracks, comes ever nearer with Chelmsford City Racecourse preparing to launch its new turf track, Jane Carley reports. 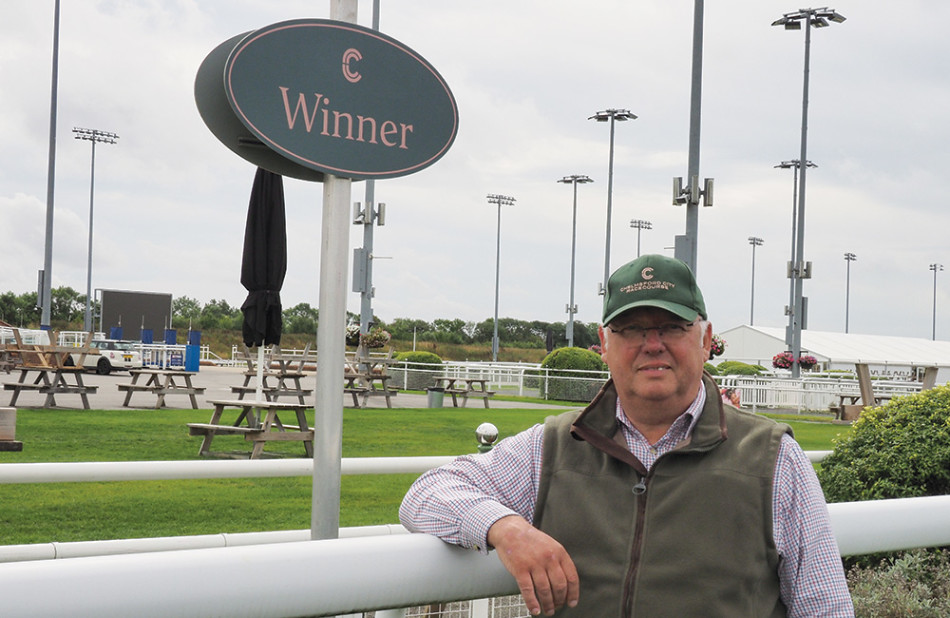 Clerk of the Course Andy Waitt

First planned before the racecourse opened in 2008, the one-mile turf circuit inside the existing all-weather track was initially constructed in 2018, but the inevitable delays due to Covid, which saw clerk of the course Andy Waitt and his head groundsman son Jamie maintaining the course on their own, followed by this year's drought, have delayed the continued establishment of the turf.

"We'd hoped to have the first fixtures in October, but we want it to be absolutely right, so we will wait until March 2023," explains Andy.

The 20m wide track has been designed with good sweeping bends, and a profile which gives a cross fall of less than 1cm on the straight and 4% gradient on the bends. Its construction incorporates drainage at 6m centres with laterals which also service the all-weather. An irrigation ring main connects to two large lagoons onsite, and the 600mm profile was then built up with loam, a large stone drainage layer, sand and soil and finished with British Sugar's topsoil product.

The track was seeded with a perennial ryegrass mixture supplied by Rigby Taylor, he adds. "Ryegrass dominates for racing surfaces now; the priorities are colour and hardiness. We need varieties that offer good recovery at the beginning and the end of the season, but we also get little rainfall, and the course is quite open and exposed."

While no official BHA trials had been carried out when Pitchcare visited in September, American trainer Wesley Ward galloped his Royal Ascot entries on the new track, while leading jockey Jamie Spencer has also ridden work on the track, both offering valuable feedback.

Chelmsford City races year-round, and the plan is to stage mixed all-weather/turf fixtures from March to November. Part of the development has been to upgrade the floodlights which illuminate both tracks with new LEDs, at a cost of £2m.

Several of the original lights were damaged in Storm Eunice, but the extended daylight hours in summer meant that the track was able to race without lights by bringing the start time forward. Racing under the new lights began in September. "The BHA has its own standards for lighting which we have exceeded, and the new lights offer a quality of light suitable for high definition pictures for broadcast," explains Andy. 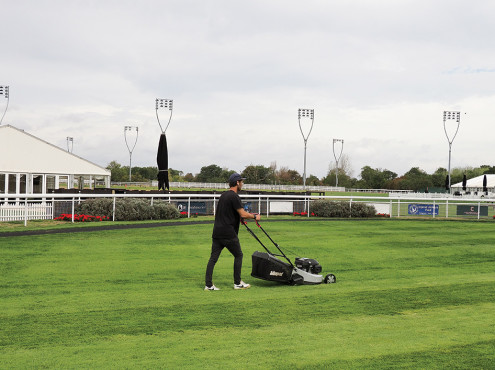 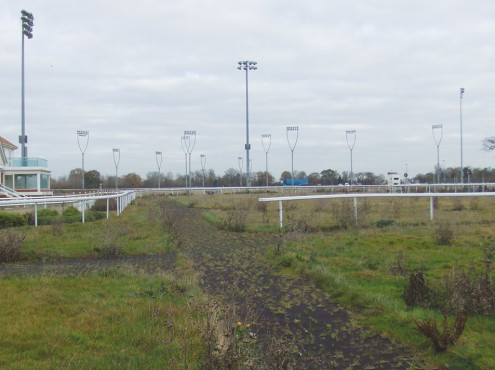 Left: Presentation of the parade ring areas is key as racing takes place 12 months of the year Right: It's a far cry from the scene that Andy had to tackle when the track had been closed after its previous owners went into receivership

The irrigation system, which uses Briggs reels to apply the water efficiently, has been key in this driest of summers, with some 3 million litres applied. "We've got 10-12in root growth, so the turf has established really well, and it's just a matter of the final preparations, including herbicide to knock back clover and fertiliser for continued growth. Verti-draining has been important to help get water and nutrients in, and for this purpose we've also recently invested in a 2.4m SISIS Megaslit which can work to 25cm."

Track mowing is another new regime to fit into the workload, and a Major triple roller mower has joined the armoury. "The mower offers a good finish and can work with our 50hp New Holland Boomer compact, making a lightweight combination. A front mount mower would have required a more powerful, heavier tractor up front, and seeing as we have the tractor capacity, it made more sense than buying a ride-on," Andy explains.

The relationship with New Holland, which has its UK headquarters just half an hour away in Basildon and the long-established Ernest Doe and Sons dealership at nearby Braintree, has been extended with the addition of two new 180hp T6 tractors to the Chelmsford City fleet.

The small team has a big job to look after the formal areas as well as the track, with the hot summer increasing maintenance even away from the turf

"We've purchased one and the other is part of a sponsorship arrangement," he comments. "They'll be used on the Gallopmasters and power harrow which maintain the all-weather track. The T6 offers plenty of lift capacity and has a great specification and cab - very different to the tractors used when I started my career!"

Completing the armoury is a 160hp Claas Arion, which will be retained mainly to work with the SISIS Megaslit.

All-weather racing takes place on the original Polytrack surface installed in 2007. The material is generally reckoned to have a 10-12 year lifespan, but a six year gap after the original Great Leighs racecourse business went into administration means it has less 'miles on the clock' than would have been expected. "It's been re-waxed and had fibre added since the re-opening in 2015, and is inspected annually by PSD as part of our licensing requirements. The surface will need replacing at some point, but it is performing well at the moment," says Andy. 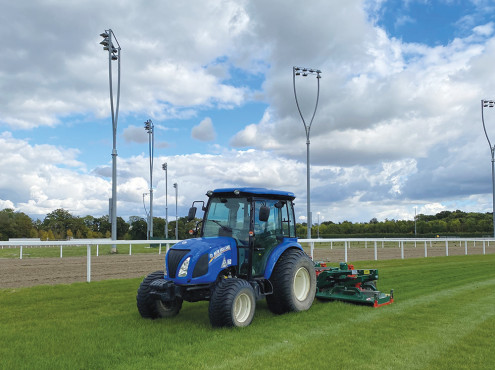 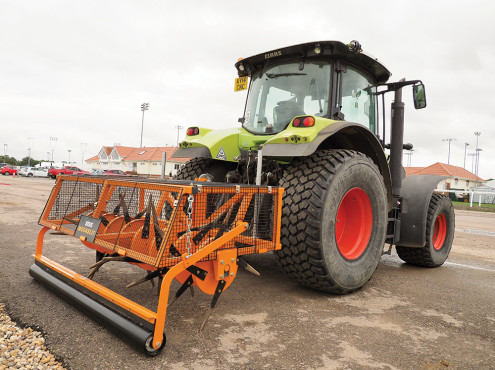 Left: A New Holland Boomer compact tractor is used for most work on the turf track, including pulling a Major roller mower, a lightweight combination which gives a good finish Right: There has been significant investment in machinery for the turf track, with a SISIS Megaslit purchased for deep decompaction

Ongoing landscaping works in the centre of the course will add more events capacity and there are plans to add an overflow 38 box stable block to supplement the existing 134 stables for busy meetings.

One of the goals of the development is to bring higher class racing to Chelmsford City; the track already hosts two Listed races and Andy hopes that they can progress to Group races, including on the turf. "The format of the one mile circuit means that we can stage mile and a half races (the Epsom Derby distance) and we also hope to stage trials for horses being aimed at the Breeders Cup - it's the same layout as American tracks, being a left handed oval."

A higher profile for Chelmsford City can only benefit the track's all-weather racing activity too, at a time when interest in the all-weather scene has never been higher. Increased ITV coverage, the £1m prize fund All-Weather Championships, which now climaxes at Newcastle on Good Friday, plus the competitive Racing League have all in increased its following and its appeal to new audiences.

All-weather meetings offer a different spectator experience to many traditional racedays, with tracks offering a wide choice of hospitality and dining options at meetings which are often held in the evening and in inclement weather.

Chelmsford City has recently upgraded its 200-seater Fairwood Brasserie which serves a carvery or buffet style meal, while the Club Restaurant and Lounge offers a panoramic view of the course, and various marquees also accommodate racegoers on the busier days, which can attract up to 10,000 spectators. Two new large screens have also recently been installed.

The parade rings and winners enclosure must remain pristine and colourful for twelve months of the year, all part of the task for the four-man team. The dry weather added to the workload recently by leading to the rubber block paving walkways dividing and needing to be re-laid.

One typical racecourse feature that is missing from the horizon is a permanent grandstand, but it remains in the long term plan, and being trackside to cheer on your pick of the paddock is a big part of the experience for many racegoers. If this year's long, glorious evenings become a feature of British Summertime, and the crowds flock to Chelmsford City to see home-trained superstar horses make their bid towards Stateside glory, the arguments in its favour might be even stronger.